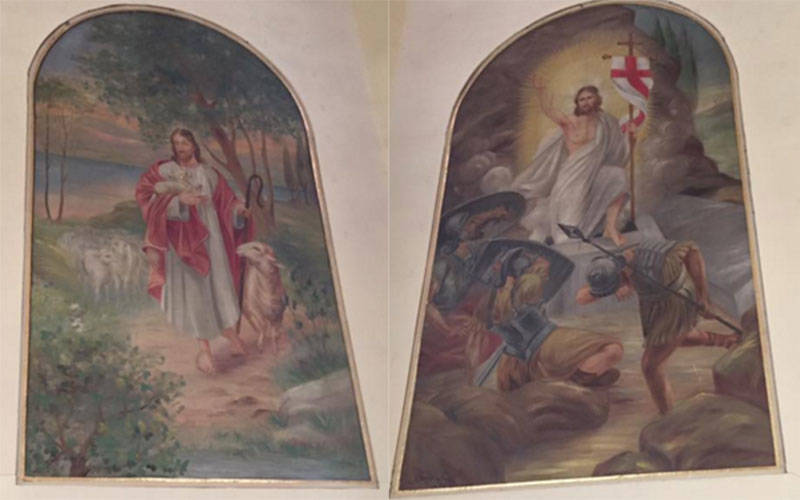 Thanks to a bit of investigative work, two paintings at Perkinsville’s Sacred Heart Church have been linked to a prolific artist from the early 20th century.

According to Sandy Booth, Wayland town historian, the mystery began when Diane Wolcott — a fellow member of Sacred Heart — recently sent her a photograph of a signature that she had noticed on one of the paintings. The signature belonged to Joseph Frederick Degering. As it turned out, a second mural inside Sacred Heart Church that depicts Christ was discovered to be a Degering creation as well. Booth noted that by researching old photos of Sacred Heart’s interior, she was able to deduce that the paintings — located on either side of the church’s stained-glass windows — went up sometime between 1906 and 1926.

Booth subsequently found out that Degering’s paintings have been featured in more than 2,300 buildings throughout the United States and Canada, including churches, American Legion halls, restaurants and schools. For example, he painted a mural of Christ in Gethsemane at the Emmanuel Baptist Church in Albany. Booth also discovered that Degering was a World War I veteran who was born in Indiana in the early 1880s. He and his wife, Mary, lived in the Albany area at one point, and he died in Los Angeles, Calif., in 1966 at age 85.

Depictions of Jesus appeared to be Degering’s specialty: A 1954 feature about him in the Long Beach, Calif., Independent Press-Telegram carries the headline “The Christs He Paints Are Everywhere.” The story adds that his creations adorned churches and cathedrals in Albany, New Orleans, Boston, Cincinnati, Detroit and Montreal.

“We are honored to know that his paintings exist here and wonder if there are other local examples of his work. We welcome any input on learning more,” stated Booth, who can be reached at boothsb4749@aol.com.