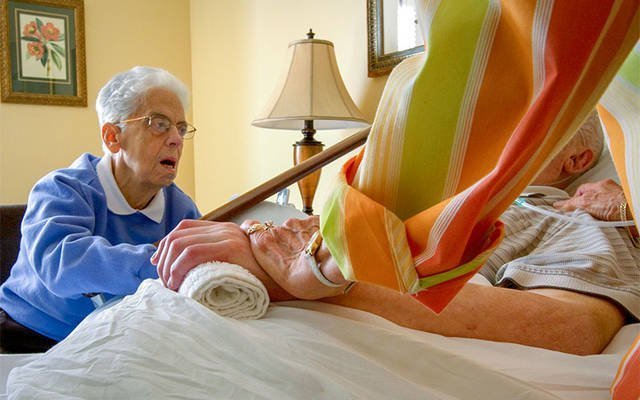 In this Sept. 7, 2012, file photo, family members watch over Leo King at his bedside at the Center for Compassionate Care in Pittsburgh. King, an 84-year-old urologist and veteran of World War II, died the following day with family at his side. Pictured is his sister Patricia King, left, and his wife, Jacqualin, right. (CNS photo/Nancy Phelan Wiechec)

Assisted suicide is in the news and on lawmakers’ agendas. Supporters call it “aid in dying” and claim it is just another option for ending intolerable pain as part of end-of-life care. But assisted suicide is radically different from end-of-life care and the practice of palliative care, the healing art of relieving pain and other distressing symptoms for patients who are seriously ill. In fact, these two agendas are at war with each other.

When properly prescribed for the pain of serious illness, powerful pain medications like morphine and other opioids are safe and effective. Patients can have their pain well-controlled without risk to life, and generally stay alert as well.

Assisted suicide is very different. Where it has been legalized, doctors can prescribe a lethal overdose of pills to patients whom they think will die within six months, so they can kill themselves. The patient then intentionally swallows a massive overdose of barbiturates to cause unconsciousness and death.

Besides having opposite results, these two approaches express different intentions.

While pain medication is generally safe under medical supervision, it may have side-effects. For example, barbiturates may be used in rare instances to sedate an agitated patient in the final stage of dying if other pain control methods are inadequate, though this poses some risk of shortening life.

In such cases, the doctor and patient must assess the good they intend and proceed only if this good outweighs the unintended adverse effects. As risk cannot always be eliminated, modern medicine would be impossible without this “principle of double effect.” The key is that no one involved intends the bad effects, especially the bad effect of killing the patient.

Medical organizations like the American Medical Association and the American College of Physicians oppose doctor-assisted suicide, in part because it destroys this essential distinction between intended and unintended effects of treatment. Patients need to be able to trust their doctors to always care for their lives and never deliberately cause death.

Assisted suicide is detrimental not only for individual patients, but also for patient care on a large scale. In countries like the Netherlands, where assisted suicide has been accepted for many years, progress in palliative care has stagnated.1 In Oregon, legalization was followed by an increase in severe untreated pain among terminally ill patients. During a period when 1,832 hospices opened in other states, only five opened in Oregon. In other states legalizing assisted suicide, use of hospice care has fallen below the national average.2 By contrast, when states pass new laws forbidding assisted suicide, while affirming that doctors may use drugs like morphine for effective pain control, use of these medications has increased — indicating progress in pain management practices.3

Assisted suicide does not enhance medicine. As noted by a doctor specializing in palliative and hospice care in the Netherlands, killing “becomes a substitute for learning how to relieve the suffering of dying patients.”4

Do we see people as the problem, such that our responsibility begins and ends with helping patients kill themselves? Or, do we see seriously ill patients as fellow human beings who deserve our love and solutions for their problems? Will we succumb to the “false mercy” of assisted suicide, or will we endorse what Pope St. John Paul II called “the way of love and true mercy”?5 Will we dedicate ourselves to providing genuinely compassionate care, as a society and for our own loved ones? Our answer today determines the care available now and for years to come.