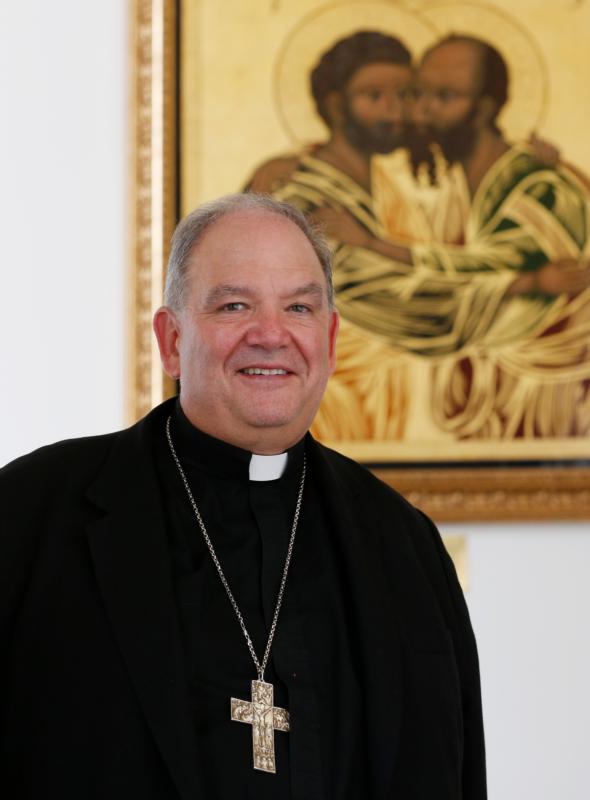 U.S. Archbishop Bernard A. Hebda of St. Paul and Minneapolis is pictured with an icon of Sts. Peter and Paul in the background at the Pontifical North American College in Rome June 29. Archbishop Hebda was among 25 new archbishops invited to the Vatican to attend Pope Francis' June 29 Mass with new archbishops from around the world. The Mass also marked the feast of Sts. Peter and Paul.

ROME (CNS) — New archbishops naturally wonder if they are the right person for the job, but reassurance comes from concelebrating Mass with Pope Francis, the pope who appointed them, said Archbishop Bernard A. Hebda of St. Paul and Minneapolis.

Celebrating the feast of Sts. Peter and Paul with Pope Francis June 29 was a celebration of unity, the archbishop told Catholic News Service after Mass.

Joining 24 other archbishops from 14 other countries for the Mass "really helps a new archbishop to recognize that what he’s doing is part of something much larger," Archbishop Hebda said.

The archbishops, who had been named over the past year, had a few minutes in private with Pope Francis and, Archbishop Hebda said, he expressed his closeness to the people of St. Paul and Minneapolis "in some challenging times."

The archbishop, 56, was named head of the archdiocese in March, nine months after taking over as archdiocesan administrator in the midst of turmoil over how allegations of clerical sexual abuse had been handled in the archdiocese. Archbishop John C. Nienstedt and Auxiliary Bishop Lee A. Piche resigned, citing the need to step down to allow healing to begin in the archdiocese.

In his homily at the Mass, Pope Francis spoke about prayer as the key to unlocking prisons of selfishness and paralyzing fear.

Asked if he experienced fear when he was named to the Minnesota archdiocese, Archbishop Hebda said, "I think there’s always some anxiety: Am I the right person for this position with its challenges?"

However, he said, "one of the wonderful things about coming to Rome and having that opportunity to be with Pope Francis is you realize that he’s the one who sent me there, and to the extent that we are able to stay close to him and that we trust him, we should have a sense that indeed my appointment there was a good thing not only for the archdiocese, but also for me and for the church."

"Some of that anxiety that I think is very natural in going to a new assignment is alleviated by knowing the person who assigned me there," the archbishop said.

Archbishop Hebda was accompanied to Rome by a small group of his family members, including a brother and a sister. His nephew, Terence Hebda, who read the first reading at the Mass, did "such a great job" and continued a family tradition, the archbishop said. Terence’s father had read at a public Mass years ago with St. John Paul II.

Pope Francis’ homily had an important message for the Archdiocese of St. Paul and Minneapolis, he said, "because we know that the Lord can do great things when we open ourselves to his grace, when we place our hope in him and when we’re willing to embrace even the surprises that come our way and obviously fear is something that can keep us from doing that."

"Certainly in our archdiocese we have some difficult legal problems before us," he said, "and just recognizing that when we place our trust in the Lord, place our trust in Pope Francis, that we have hope that indeed the Lord is going to unlock that door for us and help us move forward."