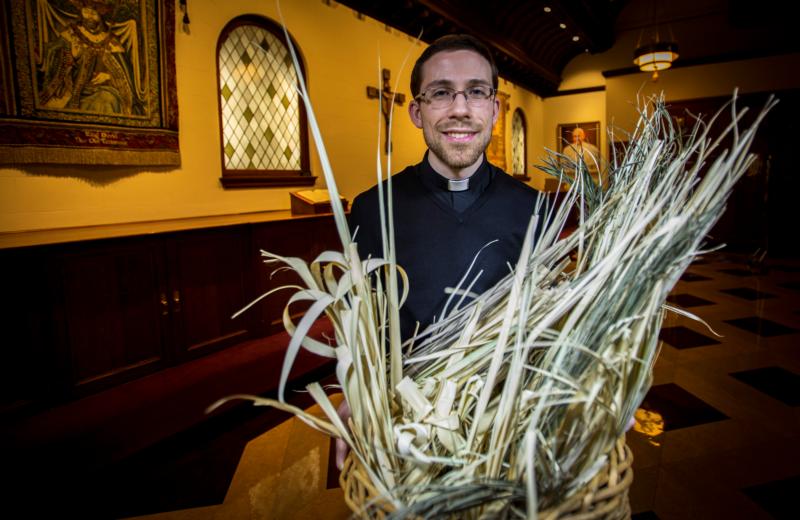 Father John Benson, parochial vicar at the Cathedral of St. Matthew the Apostle in Washington, carries palms in the church sacristy Feb. 18, 2020, that had been collected from parishioners who saved them from the previous Palm Sunday. The church burns collected palms to make ashes for Ash Wednesday. (CNS photo by Chaz Muth)

What would a Palm Sunday procession or Mass be without the presence of its namesake — the palm?

The palm branch represents victory and peace during the Lenten journey and frequently serves two liturgical functions in more than one physical form.

The palm is a prominent holy object that helps Catholics prepare for the death and resurrection of our Savior.

But it’s not always a palm branch that is used in these Lenten liturgies.

In some regions, Catholics use olive branches in their Palm Sunday processions as a sign of peace, victory and reconciliation during the last Sunday of Lent, marking the beginning of Holy Week.

So, perhaps it could be called Olive Branch Sunday?

But the green branches of the palm tree are the traditional props Catholics wave on Palm Sunday to commemorate Jesus’ triumphant entry into Jerusalem and into our faith as we welcome him into our lives as our Messiah.

Palms are historically a symbol of victory and peace and were plentiful in Jerusalem during the lifetime of Jesus.

The Gospel of John recounts how he was welcomed into the city by a crowd waving palming branches: “When the great crowd that had come to the feast heard that Jesus was coming to Jerusalem, they took palm branches and went out to meet him, and cried out: ‘Hosanna! Blessed is he who comes in the name of the Lord, (even) the king of Israel'” (12:12-13).

Catholics use the palms as a way of welcoming Jesus in a jubilant act of faith, said Father John Benson, parochial vicar of Washington’s Cathedral of St. Matthew the Apostle.

The palms aren’t just a symbol.

Before the Palm Sunday procession begins, a priest blesses the palm branches with holy water, calling Christ’s presence to mind, and the branches become a sacramental, a holy object designed to draw us closer to God.

In regions where palm trees grow natively, it’s not uncommon for parishes to harvest their own palms for Palm Sunday Mass.

“I’ve had the chance actually in California to go and cut palms,” Father Benson said, “and it’s beautiful and adds an extra significance.”

Palm trees do not, however, grow natively near the Washington cathedral where he is assigned, so church leaders there order the palms from growers in California or Florida who “lovingly” harvest and package the soon-to-be sacramental objects for their intended use, he said.

According to the Code of Canon Law, blessed items are to be treated with reverence (Canon 1171). If there’s a need to dispose of sacramentals, they must be buried or burned, not discarded in the trash.

Still, it’s customary for Catholics to take the sacramental palms home with them — sometimes weaving them into crosses — and displaying them in their homes until the next liturgical year.

As the next season of Lent approaches, many church community leaders ask parishioners to bring those palms back to the parish.

Frequently, those parish leaders will gather the collected palms and light them on fire in a ceremonial burning to create the ashes meant for distribution during Ash Wednesday Mass, the beginning of Lent.

Though the ashes come from blessed palms, a priest or bishop once again blesses them before they are placed on the foreheads of the faithful in the shape of the cross.

But this is not how all parishes obtain their ashes.

Some church leaders purchase ashes for Ash Wednesday Mass. Those ashes are not diminished since the priest or bishop blesses them, making them holy objects, but there is something extra special about the palms that make the full Lenten cycle into ash, Father Benson said.

“It’s especially fitting, for a liturgical celebration that helps us to begin Lent as a time of penance,” to use the blessed palms from a previous Palm Sunday, which is near the end of the penitential Lenten season, he said. “The cycle completes.”