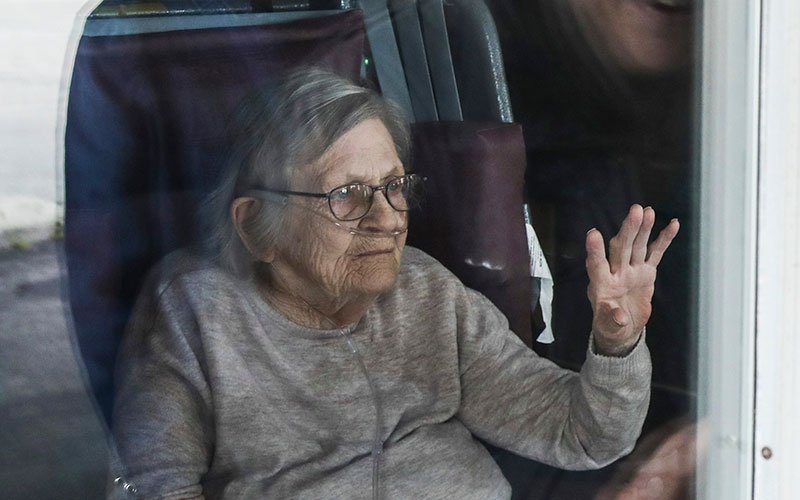 Lois Best, 91, waves from a window as her daughters, Sharon Ganote and Lynda Brisco, are reflected blowing a kiss and smiling at Wesley Manor retirement center in Okolona, Ky., April 4, 2020. (CNS photo by Matt Stone/Courier Journal via Reuters)
The coronavirus pandemic has upended the administration of sacraments throughout the diocese — a reality that has extended to parishes’ ability to minister to shut-ins and at hospitals, nursing homes and senior-living facilities.
Father Jim Fennessy, pastor of St. Francis and St. Clare Parish in Seneca Falls and Waterloo, and Father Scott Kubinski, pastor of Elmira’s Most Holy Name of Jesus Parish, said that they — along with parish staff and volunteers — have suspended Masses, Communion services and visitations to health-care facilities, senior residences and private homes. The only exceptions, they said, are such special circumstances as requests for anointing of the sick.
In a March 17 letter to parish leaders and parishioners regarding administration of the sacraments during the coronavirus pandemic, Bishop Salvatore R. Matano noted that “Pastoral care to Catholics in hospitals, nursing homes and other healthcare facilities will be governed by ‚Ä¶ protocols set by health professionals.”
For instance, Father Kubinski anointed a COVID-19 patient April 3 at Elmira’s Arnot Ogden Medical Center — but only while wearing extensive protective equipment and after discussion with the hospital’s chaplain and the head nurse of the intensive-care unit.
“The (health-care) places don’t really allow visitors anymore unless there’s an emergency situation and somebody’s dying,” Father Kubinski said. “So our hands are tied as to how much we can go.”
In Monroe County, Father Felicjan Sierotowicz told the Catholic Courier that he continues performing chaplaincy duties at Strong Memorial and Highland hospitals in Rochester and Unity Hospital in Greece. He explained that as a staff member, he retains access to those facilities while wearing such protective gear as a mask and gown. Father Sierotowicz — a native of Poland who was incardinated as a priest in the Diocese of Rochester in 2006 — noted that as of April 27, he had ministered to “a few people” who have been specifically diagnosed with the COVID-19 virus.
Father Fennessy, on the other hand, is not designated as a chaplain at health-care facilities in his parish’s ministry area, so he is not allowed into nursing homes. However, he said the facilities have facilitated video calls that have enabled him to speak and pray with patients.
“That kind of was about the best I could do,” he remarked.
Father Fennessy added that Father Michael Merritt, parochial vicar of St. Francis and St. Clare, recently performed an anointing in a parishioner’s home while taking proper precautions. According to Bishop Matano’s March 17 letter, “Anointing of the Sick in homes should proceed with caution, maintaining as much as possible social distancing (6 feet) except for the actual anointing.” The bishop also emphasized the use of a mask and gloves, minimal contact with the sick person and other surfaces, and the need to wash hands with sanitizer immediately after the anointing.
Although visits to shut-ins have largely been put on hold, Fathers Fennessy and Kubinski stressed the importance of ongoing communication, even if it’s not in person. They said their respective parishes are striving to keep in touch with the sick, elderly and homebound through telephone calling lists — “just to see how they’re doing,” Father Fennessy said — and by mailing bulletins. They noted that many older Catholics don’t have the access or knowledge to use such online resources as parish websites and livestreamed Masses.
Father Kubinski said parishioners who were accustomed to personal visits have generally been understanding of the need to suspend such activities for now.
“They wish it was different, of course,” he said. “We, too, want to follow the guidelines of the local government, but yes, it’s difficult that we don’t have the contact.”
Meanwhile, Father Fennessy acknowledged that a greatmany of his parishioners have become more or less homebound under the stay-at-home order, so a sense of isolation extends throughout the community.
“I’ve gotten calls from parishioners just to talk, text messages at 5:30 in the morning from people who are upset, worried,” he said, adding that he strives to reassure such folks that “by the grace of God we will endure (the pandemic); we’ll get through this. I think that brings great comfort to many people.”
Tags: COVID-19 Pandemic
Copyright © 2022 Catholic Courier, Inc. All rights reserved. Linking is encouraged, but republishing or redistributing, including by framing or similar means, without the publisher's prior written permission is prohibited.