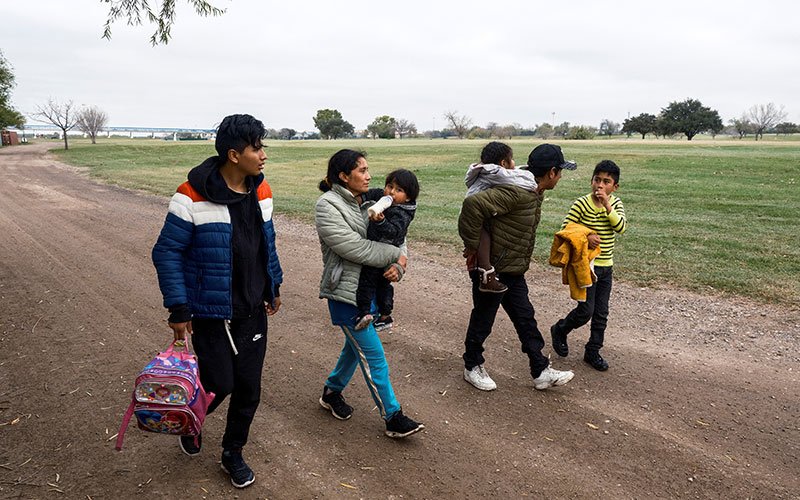 A family from Ecuador walks towards Border Patrol officers in Eagle Pass, Texas, Dec. 19, 2022, to seek asylum, as U.S. border cities braced for an influx of asylum-seekers. (CNS photo by Jordan Vonderhaar/Reuters)

It gives the Supreme Court time to consider the emergency request filed by 19 states asking the justices to keep in place what is known as Title 42 of the federal Public Health Services Act.

The Trump administration used the public health measure during the pandemic to allow U.S. border officials to expel migrants quickly without giving them an opportunity to seek asylum in the United States.

Roberts’ administrative stay ensures the policy — which a trial judge had ordered be ended by midnight Dec. 21 — could stay in place while the full court considered it. His order also asked the Biden administration to respond Dec. 20 by 5 p.m. (EST).

The Republican state attorneys general opposing the discontinuation of this policy warned that if the court did not block a federal judge’s order to end the policy it would “cause a crisis of unprecedented proportions at the border.”

The Biden administration had extended the policy last August, but this April they announced plans to end it, saying it was no longer necessary to protect public health.

Texas border cities, like El Paso, had been preparing for the surge of new migrants as the pandemic-era policy was scheduled to end.

In mid-December, Dylan Corbett, director of the Hope Border Institute, a Catholic organization helping migrants, said constant changing policies make it hard for organizations like his to plan.

“You have a lot of pent-up pain,” he told The Associated Press, noting that with government policies in disarray, “the majority of the work falls to faith communities to pick up the pieces and deal with the consequences.”

In October, Bishop Seitz issued a statement expressing his disappointment that Title 42 had been expanded to Venezuelans seeking to cross the border.

“Now we must all work harder, especially the faith community, to build a culture of hospitality that respects the dignity of those who migrate, and to continue to press lawmakers and the Biden administration to establish a safe, humane, functioning and rights-respecting system to ensure protection to those in need,” he said.

Title 42 among immigration policies brought to Supreme Court this year

Title 42 is among other immigration policies brought to the Supreme Court this year. In June, the court ruled that the Biden administration could potentially end  the Trump administration’s “remain in Mexico” policy, which sent those seeking asylum at the U.S.-Mexico border back to Mexico to wait for a hearing in U.S. immigration court.

In late November, the Supreme Court also heard arguments challenging a 2021 policy that prioritizes certain groups of unauthorized immigrants for arrest and deportation. A ruling is expected next June.