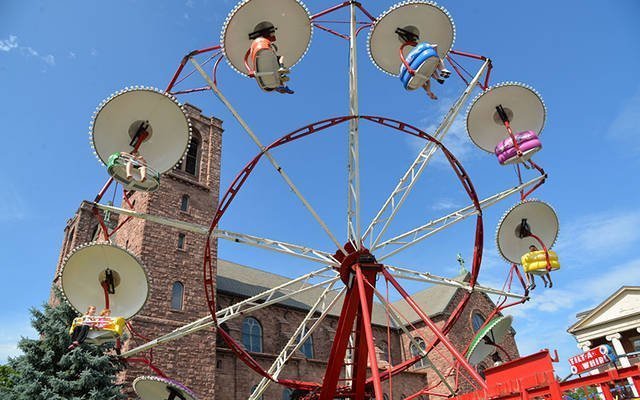 A carnival ride operates next to St. Mary Church in Canandaigua during the 2019 Summer Festival. (Photo courtesy of Tony Zollo)

Parishioners of St. Benedict Parish were looking forward this year to marking the golden anniversary of the popular Summer Festival fundraiser at one of its worship sites, St. Mary Church in Canandaigua.

Even so, given the ongoing pandemic and New York’s continued restrictions on church capacity and sizes of large gatherings, St. Benedict decided to postpone the festival until next year.

Parishes across the Diocese of Rochester are facing similar choices, with many opting to cancel plans for annual summer events and sales that not only draw large crowds but also are crucial fundraisers.

“It really was impossible to conceive that we could have a festival in a normal fashion,” Father Michael Costik, pastor of St. Benedict Parish, which comprises St. Mary and St. Bridget/St. Joseph Church in East Bloomfield, told the Catholic Courier June 29.

The Summer Festival, which was scheduled to take place Aug. 22-24, draws thousands each year from the Canandaigua and surrounding areas to enjoy amusement park rides, games, food and other activities. The festival also was to be preceded Aug. 13-14 by the parish’s annual lawn sale, featuring used furniture, clothing, housewares and other items.

“It’s (the festival’s) become a real mainstay in the Canandaigua community. As for the lawn sale, people start lining up at six o’clock in the morning, down the street, to get in,” Anthony DiPrima, director of finance and administration for St. Benedict Parish, told the Courier June 29.

“They (the festival and sale) have certainly become a major community event,” Father Costik noted. “We’d rather have a festival than not. It certainly is a big financial hit for the parish. It is our largest fundraiser.”

Each year, the Summer Festival generates about $185,000 in revenue, according to DiPrima. He said the parish is in the midst of discussing other initiatives to offset the loss of festival revenue. One of the initiatives being considered is the possibility of continuing to host the festival’s chicken barbecue as a take-out event. DiPrima added that the parish also is planning to offer raffles and virtual basket raffles.

Like St. Mary, St. Stanislaus Kostka Church in Rochester was forced to cancel its annual Polish Arts Festival, which was scheduled to take place Aug. 7 and 8.

Jan Vorndran, festival cochair, explained to the Courier July 6 that the City of Rochester will not be issuing festival permits until at least August. And when the parish learned that such annual summer events as the Puerto Rican Festival, the Park Avenue Festival and the Corn Hill Festival had been cancelled, “we knew that we shouldn’t do it (our festival).”

The two-day Polish Arts Festival, which features Polish entertainment and food, draws not only the Rochester Polish community, but also those in such surrounding areas as Buffalo, Syracuse and Batavia, according to Vorndran.

“We draw from all of the Polish communities around besides all of the friends and relatives of the people (of the parish) have been coming for years for the food and the entertainment,” she added.

The Polish Arts Festival is a crucial fundraiser for St. Stanislaus. Vorndran said the parish is looking into other means, like raffles and a drive-thru potato pancake dinner, to help raise part of $30,000 to $35,000 that the festival raises for the parish each year.

“We are certainly not going to be able to raise the $30,000 in one or two events, but to do something that’s going to give us an opportunity to replenish, even if it’s only a little bit at a time, because every little bit helps,” she said.

While Vorndran said she is going to miss celebrating the Polish culture and seeing all the families that attend the festival, she said at this time health is the priority.

“The most important thing is the safely of our friends in our community,” she said.