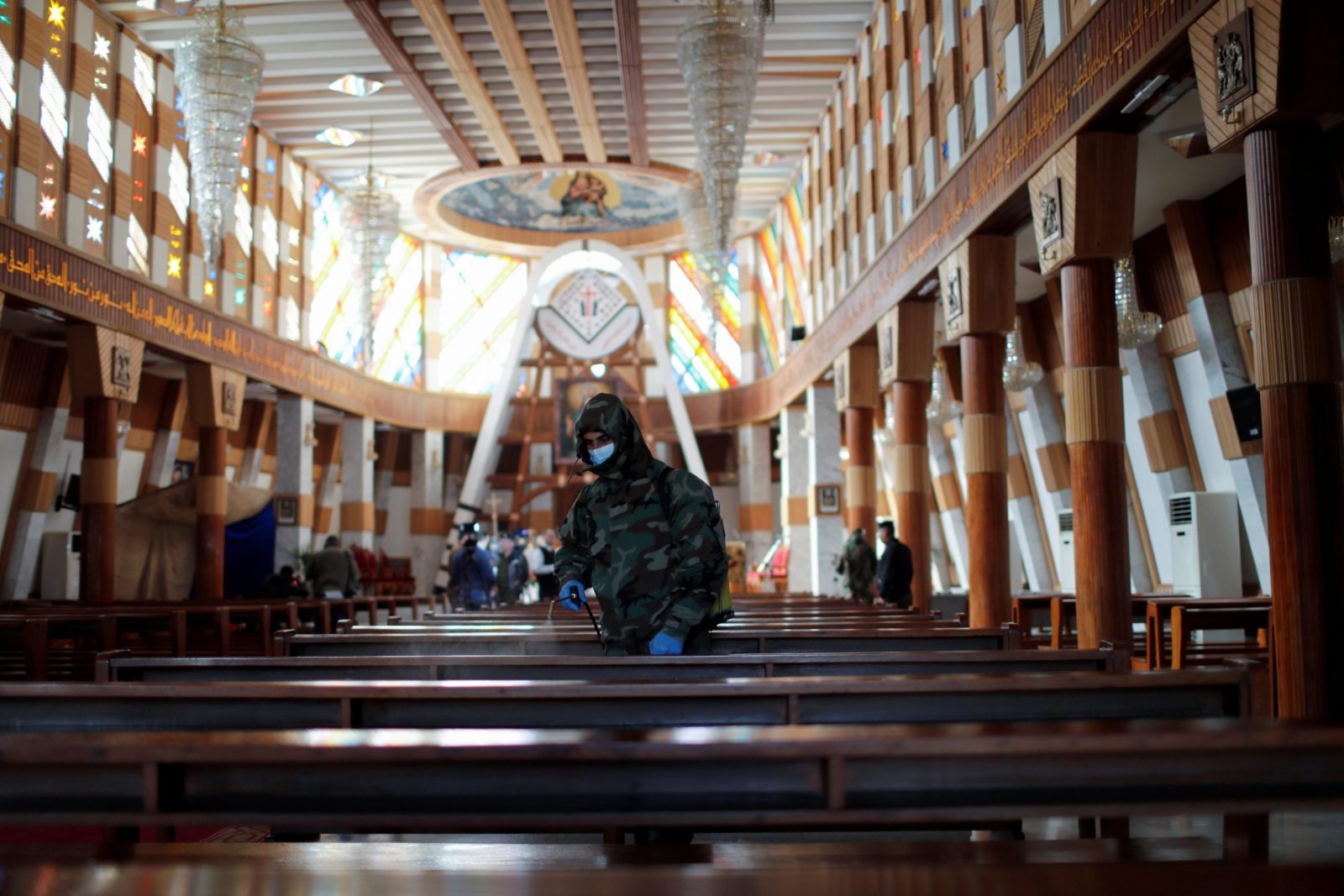 A member of the civil defense team disinfects inside Our Lady of Salvation Church in Baghdad, Iraq, Dec. 30, 2020, during the COVID-19 pandemic. Iraq is set to receive thousands of Pfizer-BioNTech COVID-19 vaccines in addition to the Chinese Sinovac vaccine this month. Pope Francis plans to visit Iraq March 5-8. (CNS photo by Thaier Al-Sudani/Reuters)

AMMAN, Jordan (CNS) — Despite challenges posed by the COVID-19 pandemic and security concerns, Pope Francis hopes to visit Iraq, an opportunity that eluded his predecessors.

Iraqis are excited that he is scheduled to come, despite those concerns.

“Iraqi Christians are very much optimistic because it’s a sign of hope and solidarity despite the pandemic, despite the security challenge. It’s a strong sign of solidarity,” Iraqi Father Emanuel Youkhana told Catholic News Service by phone from the northern city of Dahuk. Father Youkhana is a priest, or archimandrite, of the Assyrian Church of the East.

The 84-year-old pope, newly vaccinated, is moving forward with his March 5-8 trip unless there is a serious new wave of coronavirus infection there. It marks his first foreign trip since being grounded for 16 months due to the pandemic.

Pope Francis told Catholic News Service staffers at the Vatican it is important that the Iraqis “will see the pope is there in their country,” even if most would see him only on television because of social distancing requirements.

It’s the first-of-its kind visit by the pope after St. John Paul II’s scheduled trip to Iraq in 2000 had to be canceled due to regional tensions. St. John Paul wept that he could not go, as he especially wanted to visit the city of Ur, the birthplace of Abraham, recognized as the patriarch of faith in one God by Jews, Christians and Muslims.

In mid-2019, Pope Francis announced that he intended to make his first visit to Iraq the following year, but the trip was postponed amid regional tensions and ongoing anti-government protests across the southern and central parts of the country. The pope told CNS in early February that he does not want to disappoint the Iraqis for a second time.

Iraq is set to receive thousands of Pfizer-BioNTech vaccines in addition to the Chinese Sinovac vaccine this month. In early February, the Iraqi Health Ministry reported 1,134 new COVID-19 cases, bringing the total number of confirmed infections to 628,550.

On Jan. 21, the day after the Vatican announced plans for the papal trip to Iraq, two suicide bombers detonated explosive vests in a crowded market in central Baghdad, an attack claimed by the Islamic State group. At least 32 people died and more than 100 were injured.

Shortly afterward, Cardinal Louis Sako, the Baghdad-based patriarch of the Chaldean Catholic Church, called on the faithful to fast and pray for peace in Iraq and for an end to the pandemic. He dismissed the significance of the bombing on the overall security situation in Iraq and said, “There is no risk for the pope.”

The Iraqi government is responsible for the pope’s safety and that of his entourage during the visit.

“There are security challenges, that is quite clear, because everywhere there are militias and terrorist groups. The Shiite militias will help (the Shiite-dominated government) in securing the visit. We hope, we pray there will be nothing,” said Father Youkhana, who runs the Christian Aid Program Northern Iraq.

The Christian program assists displaced Iraqis around Dahuk and the Ninevah Plain, where tens of thousands were displaced by Islamic State militants in 2014. “But if you follow the news in Iraq, ISIS is there. ISIS is still active,” he said.

“The government will not want to risk any situation with the pope’s visit, because it would cause a failure for country. The pope is respected in many sectors of Iraqi society,” Iraqi Dominican Father Ameer Jaje, an expert in Shiite relations, told CNS by phone from Baghdad.

He added that it is difficult for clergy to comment on security as it is the domain of the Iraqi government. Iraqi President Barham Salih said he hoped a papal visit would help the country “heal” after years of strife.

More than 500 people have been killed in over a year as young Iraqis have protested, advocating for civil rights and a better economy and against sectarianism, corruption and unemployment. The protests were mainly in Baghdad and the south.

Despite reaching historic numbers in late 2019 and successfully mounting pressure on political elites, the protests wound down in the wake of the coronavirus pandemic. Also, the violent crackdown by Iraqi security forces and militia groups, as well as kidnappings and targeted assassinations, caused their numbers to recede. Prime Minister Mustafa al-Kadhimi has been vocal about his support for the protesters’ demands.

Father Jaje said he believes Pope Francis has a special message for Iraq’s young people, who are tired of the sectarianism tearing their country apart.

“Iraqi youth say: ‘No, to divisions on sectarian lines.’ They want to live like other people in the world. I believe these people are looking forward to the pope’s visit, because he will deliver a message of hope to them, an encouragement for the country to live and reject the kind of sectarianism that has been destroying Iraq,” said Father Jaje, who is also an adviser to the Pontifical Council for Interreligious Dialogue.

“Many youth have sacrificed their lives for Iraq’s sovereignty and the desire to live together as one people: Iraqis, whether Sunni Muslim, Shiites, Christians or whomever. I believe the pope will encourage Iraq to reclaim its sovereignty and put an end to violence,” Father Jaje told CNS.