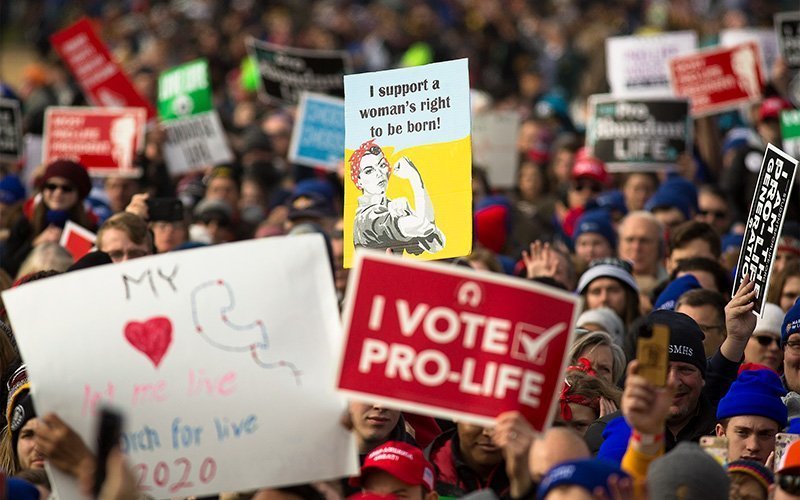 WASHINGTON (CNS) — While the annual March for Life in Washington is still scheduled for Jan. 29, the cross-country bus pilgrimages that have been at the heart of the event for decades are being decimated by the COVID-19 pandemic.

Local events are being announced in lieu of the pilgrimages.

Each of them typically brings 200 or more marchers for visits of at least three days, reserving large blocks of hotel rooms.

“We did not come by this decision lightly,” the Buffalo Diocese said in a statement. “With the uncertain and ever-changing regulations due to COVID-19, bus capacity restrictions and traveling through other states, all to converge with other states around the country, we have decided it is in the best interest of all involved to make their own personal decisions and arrangements.”

“The procedure for quarantining if the need arose is more complicated than we are able to manage,” said the Omaha archdiocesan statement. Also “the bulk of our time (would) be spent in Virginia and Maryland, which currently have high rates of coronavirus transmission,” it said.

As an alternative, the archdiocese asked parishioners “to work with their parish pro-life coordinators and other pro-life groups” for a Night for Life Jan. 22, the date of the Supreme Court’s 1973 Roe V. Wade decision legalizing abortion on demand. The St. Paul and Minneapolis Archdiocese plans a similar event.

The Diocese of Springfield, Illinois, took another approach: “We are not providing the transportation or setting up their hotel rooms,” said Tony Cerveny, the diocese’s director of youth and young adult ministry. “We are providing two-day programming in D.C. for any of our parishioners that attend the march.”

The Fort Wayne-South Bend Diocese originally planned to shorten its pilgrimage to just 36 hours, but canceled that plan Oct. 27. “You can add us to the list of those who will be opting for local involvement in the (march),” sad John Pratt, director of youth ministry for the diocese.

A spokeswoman for March for Life told Catholic News Service the organization is working with both the National Park Service and District of Columbia health officials “to make sure safety measures are in place for the marchers.” More details, such as mask and social-distancing requirements, will be announced closer to the event.

Last January’s rally on the National Mall, at which President Donald Trump spoke, and the march up Constitution Avenue to the Supreme Court were believed to have drawn at least 100,000, although march organizers never release an official crowd estimate and only describe the number as being “in the tens of thousands.”

The district’s government, which has prohibited gatherings of over 50 people and has currently imposed a 14-day curfew for out of state visitors from 31 states deemed “high risk,” doesn’t have jurisdiction over the Mall, which is federal land.

The National Park Service did not require masks as part of the permit for the Oct. 25 prayer rally on the Mall sponsored by evangelist Sean Feucht. The permit was approved for 15,000 attendees, but observers said the number who participated was far fewer. Event organizers did not require social distancing or mask-wearing.

In January, Christian singer Matthew West is headlining the March for Life rally, which usually includes politicians and other speakers.

Among groups with plans to attend is Benet Academy in Lisle, Illinois, which has imposed strict protocols: Students must remain in groups no larger than four with one adult throughout the trip, they’ll record information for any needed contact tracing, and there will be daily temperature and symptom checks.

The University of Mary in Bismarck, North Dakota, which typically sends hundreds to Washington, is downsizing that presence while adding to a local event.

“We plan to fly this year instead of bus, with a goal of 40 students traveling to D.C.,” said Ed Konieczka, director of university ministry. In addition to shortening the stay, the university is asking students to be tested for COVID-19 before they leave.

The university is planning to participate in a local march Jan. 29 that will involve students, the Diocese of Bismarck and at least four high schools.

Also that weekend, the annual conference sponsored by Students for Life, which last year drew more than 3,000 to a Washington hotel, will be online only.

Training session topics include “Pro-Life Apologetics” and “Responding to the Abortion Industry in Your Community,” and in Washington, there are plans for “three days of socially distant activism as allowed by location,” said Kristi Hamrick, the spokeswoman for the organization.

“We will still have students here for the march, but we will also do life chains across the country for those who can’t make it,” she said.