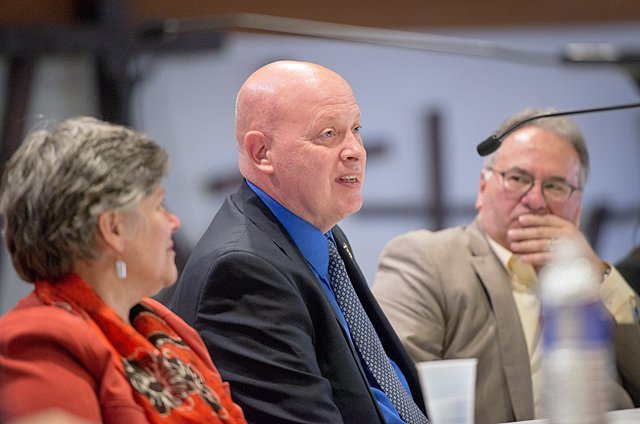 NORTH CHILI — What is the Catholic Church’s view on cremation vs. a traditional burial ceremony?

What can a deacon do?

How many holy days are there per year and why do we have them?

After Jesus’ crucifixion, why was it necessary that he descended into hell, as stated in the Apostles’ Creed?

How is someone declared a saint?

How do you know if you have a vocation?

Queries like these can’t easily be handled with quick sound bites. As such, two hours were set aside for five panelists — a priest, two deacons and two women religious — to tackle questions about the Catholic Church during an evening gathering April 27 at St. Christopher Church.

Sixteen questions in all were addressed about Catholic traditions and teachings as well as other aspects of the faith. Panelists responded with detailed, thoughtful replies, such as those by Deacons Brasley and Lohouse on the role of a deacon.

Deacon Brasley noted that deacons are ordained men who can preside at baptisms, marriages and funerals while also performing ministries "to serve those who are perhaps less fortunate, those who are on the margins." Meanwhile, Deacon Lohouse pointed out that most permanent deacons work in full-time jobs not related to their faith and are married with children.

"Hopefully, we are a demonstration of the best of Christianity out in what we call the secular world," Deacon Lohouse said.

Commenting on holy days of obligation, Father Gaudio said that "I think the obligation brings us to a deeper relationship. It seems to me that the obligation is an invitation, not a burden. It gives us a chance to grow."

Regarding vocations, Sister Kurowski sought to dispel the notion that people in religious life face too many restrictions on their lifestyles.

She and Sister Del Santo said that some people might be called to a religious vocation such as theirs, whereas God could be beckoning others to the married or single life.

"I really do believe each one of us has a particular purpose. And our work is to discover what that is," said Sister Del Santo, who also is a nurse. "This life is not what I had anticipated, but it’s the happiest I’ve ever been."

Kim Winden, youth minister at St. Christopher, told the Catholic Courier that she got the idea to organize a question-and-answer night after realizing how fortunate she is to get quick answers to questions about her Catholic faith due to working in a parish setting.

"But what about all the other people out there who have questions?" she remarked.

Winden said there were far more questions submitted on April 27 than there was time to address them. However, she said plans are underway for panelists to respond to unanswered questions in the parish bulletin during the upcoming year.

The panel session was attended by St. Christopher members as well as people from other parishes. Winden said she was pleased that Catholics of all ages attended — and, based on its success, she’s hoping to see it become an annual event.