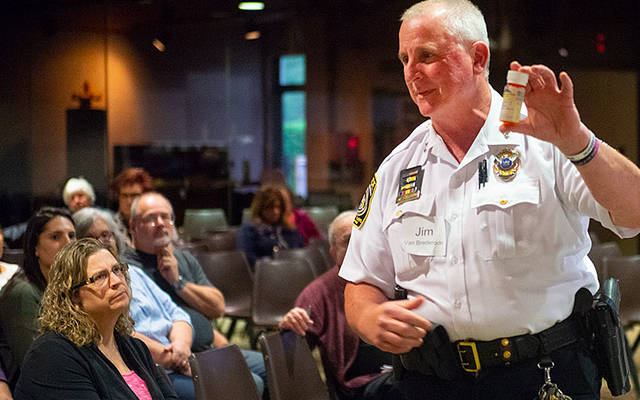 James VanBrederode, chief of police for the Town of Gates, talks about the opioid crisis during a community forum at St. Christopher Church in North Chili May 20. (Courier photo by John Haeger)

NORTH CHILI — A woman said she remains in daily pain from losing her daughter to a drug overdose last year.

A police body-camera video showed a young-adult male, who had just overdosed, slumped in the seat of his car at a busy intersection.

People in visible public positions told of their personal struggles with addiction as well as those of loved ones.

There was no shortage of gripping testimony during an opioid awareness night May 20 at St. Christopher Church. The event, which was attended by approximately 75 people, featured presentations by a seven-member panel.

Many hands went up when James VanBrederode, chief of police for the Town of Gates, asked if anybody knew someone who had overdosed or died due to drug addiction. VanBrederode noted that in 2017, 220 overdose deaths were recorded in Monroe County — up from 169 fatalities in 2016 and 69 the previous year. Jim Wesley, a retired forensic chemist supervisor for the Monroe County Crime Laboratory, added that more and more, deaths are being caused by the ingestion of multiple drugs.

“This is a crazy epidemic,” VanBrederode remarked, adding that an increasing number of opioid overdoses are fueled by fentanyl — a medication prescribed for treating severe pain that’s 50 times more powerful than heroin, according to the Centers for Disease Control and Prevention.

VanBrederode and other presenters emphasized that drug addiction can affect anyone regardless of age, income level or family background. Among the recent local victims was Christina Farsace, who succumbed to an overdose on May 16, 2018, at age 33.

“You really don’t know what addiction looks like until it’s in your family,” said her mother, Patty Suppa, one of the speakers. Suppa, who now serves as an advocate to help raise awareness about addiction, called for greater resources to help people before it’s too late, saying there aren’t enough beds locally to provide timely treatment.

Also active in the fight against addiction is Gates to Recovery, founded in 2017 in part by VanBrederode and Mark Assini, Gates’ former town supervisor. The grassroots volunteer effort features a free drop-in center every Thursday from 6 to 8 p.m. in the recreation center at Gates Town Hall to assist with treatment placement and provide other supports for people suffering from addiction and their family members. Gates to Recovery, which offers a 24-hour hotline at 585-310-4080, has now spread to several other towns in Monroe County as well.

“We’ve gotten over 200 people into recovery,” said Assini, who said May 20 that his personal interest in Gates to Recovery has been spurred by his sibling’s ongoing struggle with addiction.

Another panelist was Randy Cimino, president of Gates to Recovery, who said his drug addiction extends back 30 years; he’s been in recovery for seven years. Meanwhile, David Dunning, supervisor for the Town of Chili, said his addiction earlier in life escalated “until it completely destroyed my life and my family.” However, he has now gone 32 years without taking alcohol or other drugs.

Dunning observed that only the addicted person can decide to seek treatment: “You have to be ready.” Yet he emphasized — as did Cimino and Suppa — that loved ones should continue offering that person love and support, no matter how difficult it may be. Dunning, for one, said he couldn’t have attained sobriety “had it not been for my mom not giving up on me.”

Dunning agreed, saying the average person can’t easily fathom how hard it is to end an addiction: “It’s all-consuming, it takes over everything in your life.”

It’s also monumentally difficult to stay clean, Cimino added: “This is with me every day.”

Panelists urged audience members to equip themselves with Narcan, a drug that can block or reverse the effects of opioids when an overdose has occurred. Olinda Ford, who serves as opioid overdose prevention coordinator at Trillium Health in Rochester, noted that many community organizations now offer free Narcan training, including hers. (Call 585-210-4146 for details.)

The May 20 event’s final speaker, Cathy Saresky, a substance-abuse expert from Rochester’s Catholic Family Center, encouraged more parishes to become involved by hosting public and parish-based seminars and support groups related to drug addiction. Saresky has appeared at several awareness events as part of a two-year focus on the opioid crisis by the Diocesan Public Policy Committee.

EDITOR’S NOTE: Parishes may email calendar@catholiccourier.com to have their events related to drug addiction included in the Catholic Courier’s online calendar of events.

Tags: Health, Monroe County West
Copyright © 2022 Catholic Courier, Inc. All rights reserved. Linking is encouraged, but republishing or redistributing, including by framing or similar means, without the publisher's prior written permission is prohibited.