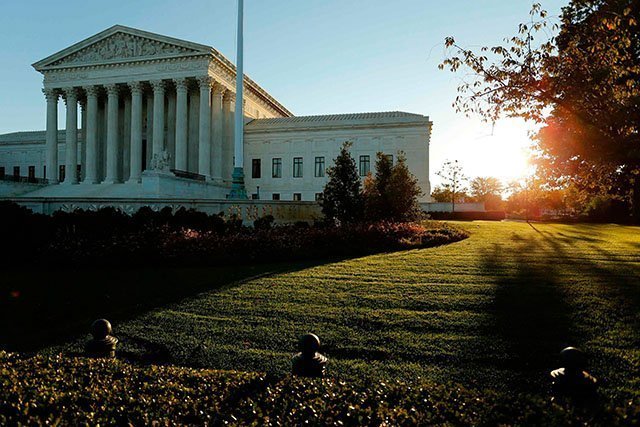 A general view of the U.S. Supreme Court building at sunrise is seen in Washington Oct. 5.

WASHINGTON (CNS) — The influence of religion on U.S. Supreme Court justices has grown more prominent in the last 50 years, according to five panelists who convened Oct. 27 to examine how the religious beliefs of the current justices affect their interpretation of the Constitution.

The panelists spoke about past and contemporary Supreme Court cases and considered how religion shaped the justices’ decisions.

The Religious Freedom Center, an educational initiative of the Newseum, and Moment Magazine, an independent publication targeted toward Jewish people, sponsored the event.

"When you think about the justices, they all have an interesting connection to religion, I think," Washington Post reporter Robert Barnes said. "Now, I don’t know that any of us could say how that impacts the way they decide cases. I do think, however, it has a big impact on the way the advocates and those going to them for opinions act."

The Supreme Court includes six Catholics and three Jews. Lyle Denniston, a journalist who has reported on the Supreme Court for more than 50 years, said he thinks the plurality has increased the role of religion both in and out of the court.

"The steady movement toward expanding the sphere of religion in the public square is in considerable part a product of the comfort with which certain faiths, particularly the Roman Catholic faith, have in … co-opting the government in order to advance the principles of that faith," he said. "And I think that’s a very important influence in this court in steadily, sometimes precipitately, moving religion more to the center of public affairs."

Barnes referenced the 2014 Town of Greece v. Galloway case, in which the court ruled that the town should be permitted to open municipal meetings with a prayer, as an example of the court’s changing response to religion.

"That’s one that the court didn’t have to take but decided to take and it really divided the court," he said.

The panel debated whether nonreligious influences, such as the justices’ socioeconomic backgrounds, factor as prominently into their rulings as their religious affiliation. Marshall Breger, a professor at The Catholic University of America’s Columbus School of Law, said people should not overestimate the role of religion because it is "one of many things" that influence justices.

Tony Mauro, a Supreme Court correspondent for the National Legal Review, agreed that religion does not hold more weight than other factors in influencing how a justice decides a case.

"I think it does have an effect on how they look at cases and look at life, in the same way that coming from Harvard or being born in the South might have an impact on their perspectives," he said. "It’s just one of many cultural elements in their backgrounds."

One effect of the religious makeup of the Supreme Court in recent years, the panelists said, is that the justices are more open in discussing their faith.

"I think it could be partly because … whenever they say anything, people are watching much more than they used to," Mauro said.

Stephen Wermiel, a law professor at American University, contrasted today’s justices with the late Justice William Brennan Jr., who served on the court from 1956 to 1990. Brennan, he said, advocated for a strict separation between church and state.

"Justice Brennan, I think … is the most ardent separationist in the modern history of the court, and I think he was that precisely because he was Catholic," Wermiel said. "He believed deeply in religion, but he believed that it was private and personal and that having religion in the public square and in public life was divisive."

"Having the government involved in your religion demeans your religious beliefs," Wermiel continued. "And I think that view is gone. I’m not even sure there’s anybody on the court that would share that view to that degree."

The panelists also talked about the polarizing issue of abortion in U.S. culture and how the justices have approached it. Denniston said he believes the issue is now largely driven by a Catholic perspective. He specifically referred to the 2007 decision in Gonzales v. Carhart, in which the court upheld the Partial Birth Abortion Ban Act.

"Of course, when you talk about abortion in this court, you have to talk about (Justice) Anthony Kennedy, who probably holds the decisive vote on that subject," he said. "I think Justice Kennedy is acting out his faith in that area."

Denniston emphasized the importance of viewing religion as a private matter.

"For a traditionalist like me, at least a traditional journalist, this topic makes me a little bit uncomfortable, because I tend to think that religion is a matter of private choice and private exercise," he said. "And we should not, in fact, audit our public officials in terms of how well they serve their faith."