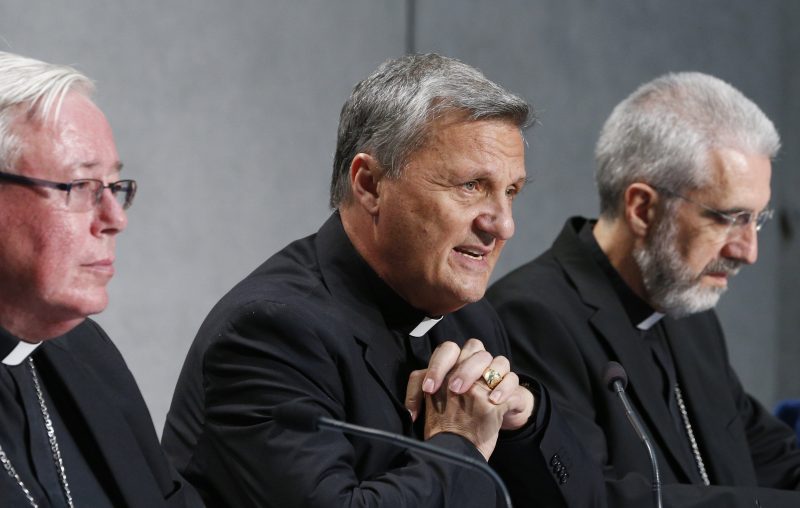 Cardinal Mario Grech, secretary-general of the Synod of Bishops, speaks during a news conference to present an update on the synod process at the Vatican Aug. 26, 2022. Also pictured are Cardinal Jean-Claude Hollerich of Luxembourg, relator general of the synod, left, and Bishop Luis Marín de San Martín, undersecretary of the synod. (CNS photo by Paul Haring)

VATICAN CITY (CNS) — The input and feedback coming from those taking part in the synodal journey underway around the world have inspired feelings of gratitude, hope and deeper faith for the many people involved with the process, said a panel of officials and organizers for the Synod of Bishops.

Cardinal Mario Grech, secretary-general of the Synod of Bishops, said organizers are seeing “a church that is alive, in need of authenticity, healing and that increasingly yearns to be a community that celebrates and proclaims the joy of the Gospel, learning to walk and discern together.”

He and others spoke to reporters at a Vatican news conference Aug. 26, updating the results of the concluded first phase of the synodal process.

Cardinal Jean-Claude Hollerich of Luxembourg, relator general of the synod, said that reading the syntheses from the episcopal conferences and other major organizations representing the church “has produced in me, as a disciple of Christ and as a bishop, a great spiritual consolation that opens up to a great hope. This hope must now be transformed into missionary dynamism.”

The Synod of Bishops’ office has received the summaries from more than 100 of the world’s 114 bishops’ conferences, “and they are still arriving. This incredible figure tells us that yes, the church is in synod!” he said.

The world’s bishops’ conferences were asked to send in reports by mid-August synthesizing the experiences, questions, discussions and insights that emerged from their parishes and dioceses.

The “second” or “continental phase” of the process has begun, in which the Synod of Bishops’ office will group together the bishops’ conferences’ reports by continent, then draft a document that highlights the priorities and core issues that emerge on a broader, more “continental” scale.

Each continental document will go back to the bishops’ conferences in that area so they can be sent to the local, parish and diocesan levels for a period of reflection, listening, dialogue and discernment that responds to and enriches the document from the synod office. Those responses will be returned to the Synod of Bishops’ office and will form the foundation for building the working document for the general assembly of the Synod of Bishops in October 2023.

Italian Jesuit Father Giacomo Costa, adviser to the secretary-general of the synod and head of the task force on drafting the document for the continental phase, said he has heard people are concerned their voices will “get lost” in all the compiling and paring down involved in producing these summarized reports.

There will be “gaps,” and it is impossible to cover in the month-long general assembly “everything” that emerges, he said, so the focus will be on finding the essential elements and priority issues to be addressed at the 2023 synod.

However, the most important part of the synod, Father Costa said, is the actual process itself: a church that reaches out to its members, to those on the peripheries, and that learns to do more than ask questions but also to promote actual dialogue.

Xavière Missionary Sister Nathalie Becquart, one of two undersecretaries of the Synod of Bishops, said she has seen the local churches really want the synodal journey to continue.

“There was an impressive mobilization around the world to Pope Francis’ call,” she said through an interpreter. The mobilization included the many nations that are experiencing enormous hardship and difficulties, like Ukraine and Congo, to name a few, she said.

Challenges still remain for the continental phase, she said, because there still needs to be better formation on how to work as a team and how to listen as well as a “change in mentality,” she said.

There needs to be a “mindset” that sees everyone having equal dignity, and, therefore, needing to be included and listened to, she said. That would mean there needs to be much more input from young people, women, those who experience great suffering and hardship, and victims of abuse, she added. They must also “be part of the process.”

In the question-and-answer portion of the conference, Cardinal Hollerich spoke about the purpose of the synod in listening to everyone and the importance of respecting church doctrine. The question specifically pointed to the cardinal’s past remarks calling for a change in the church’s teaching on homosexuality.

“I fully believe in the tradition of the church, and what is important, I think, in this (synodal) process is not a change of doctrine, but to listen to everybody, to listen also to the suffering of people, I think of parents, for instance, and for people concerned,” he said.

The aim is not to have a change in doctrine, he said, “but a change of attitude: that we are a church where everybody can feel at home.”

“I am not in favor of changing any doctrine, I am in favor (of) a church where really everybody can feel welcome, and this welcome does not mean that there cannot be discussions” and different positions, he said.

“If we close the door on people, we push some people into despair, and that is something that we do not want,” he said.

He also said his papally appointed role at the synod as relator general was to serve the pope and the whole church, saying, “I have no personal agenda for this synod.”

“I hope that I change during this process, because we speak about synodal conversion, (and) if we who are most” closely and concretely involved in the synod do not change, then “there is something wrong on our side. So I am open and listening, and I do not push any agenda.”