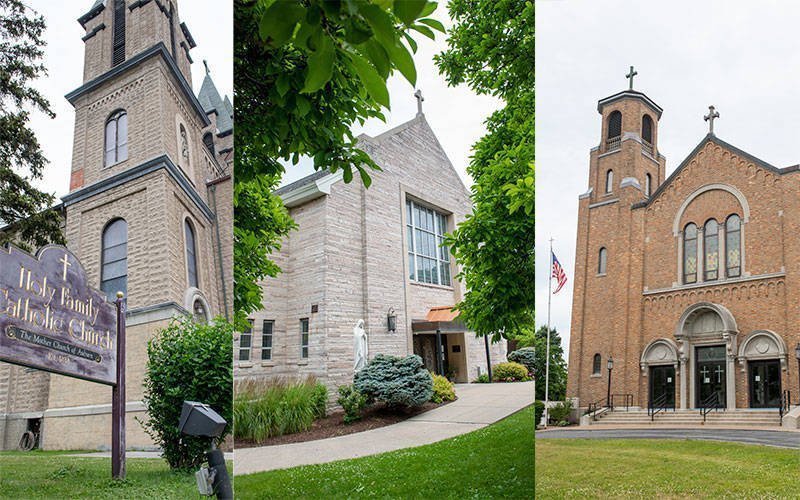 Cayuga County Catholics are waiting this summer to learn whether four of their churches will close.

In May, two local pastors and a committee of 17 parish representatives recommended the closure of St. Alphonsus, Holy Family and St. Francis of Assisi churches in Auburn and St. Joseph Church in Weedsport.

Bishop Salvatore R. Matano is weighing the recommendations and has not yet announced a decision while the matter continues under discussion at the diocesan Presbyteral Council.

“We’re hopeful that those (recommendations) provide some good basis for thought and rationale that could be used as the bishop ultimately makes some decisions here,” remarked Dan Fessenden, chair of the pastoral-planning committee that developed the recommendation.

This recommendation is the culmination of months of work by committee members and represents the most recent step in a process that began several years ago. In 2017, Bishop Matano asked the pastors of parishes in Auburn and northern Cayuga County to form teams to assess the ministerial and administrative needs of those parishes and to plan for future declines in the number of priests available to serve the area.

As a result of this work, in 2019, the Auburn parishes of Holy Family, St. Alphonsus and Sacred Heart clustered with St. Ann in Owasco. In 2020, St. Mary and Sts. Mary and Martha parishes in Auburn formed a cluster with Our Lady of the Snow Parish, which then had worship sites in the northern Cayuga County villages of Weedsport, Cato and Port Byron. Each of the two clusters shared a pastor and a parochial vicar.

In a June 2020 letter to the pastoral leaders, Bishop Matano pointed to statistics showing a 36-percent decline in Mass attendance at the Auburn and northern Cayuga County parishes between 2011 and 2019, and a 14-percent decrease in the number of Catholic households in the area over the same time period. The bishop instructed the pastoral leaders to “develop a pastoral plan which respects the entire city of Auburn and Northern Cayuga County.”

“Recognizing both the strong Catholic faith and tradition of the faith communities in this area of our Diocese, I am also very mindful of the ongoing demographic changes and circumstances in the parishes, namely the declining attendance at Mass due to demographics and an aging population, as well as the financial and personnel considerations and the resources available to keep a vibrant faith alive and strong in Auburn and Northern Cayuga County,” Bishop Matano wrote.

The pastoral-planning committee, composed of representatives from each of the parishes and chaired by Fessenden, was formed last fall in response to the bishop’s letter.

“We were asked to very specifically … look at the buildings and church facilities throughout Auburn and northern Cayuga County, and offer guidance and recommendations on how they may be reconfigured in a way to kind of address the amount of unutilized and under-utilized facilities,” Fessenden explained.

Committee members studied information about community demographics, priest availability, financial and parish-life trends and projections about future facility needs. They looked at each parish campus, taking into account such factors as its geographical location and the ease with which parishioners might attend Mass elsewhere if that church were to close, he said.

They also pored over a report prepared by Sean Moran, the Diocese of Rochester’s manager of buildings and properties, detailing the condition of each building on each campus. The report highlighted issues that need to be addressed, the potential cost of doing so and satisfactory aspects of each campus.

“The diocese was quite strong in their viewpoint that campuses should not be subdivided or split up. In some cases like Holy Family or St. Alphonsus, those are both large churches, but they also have school buildings and rectories and other facilities on their campus that were or are in various states of deferred maintenance, and so it made it difficult. To look at just the church by itself would have been a different situation, but we were looking at campuses, so that factored in (to the recommendation) to some degree,” Fessenden remarked. “None of these were easy decisions to make.”

The committee prepared a preliminary recommendation, which called for the closure of Holy Family, St. Alphonsus, St. Francis of Assisi and St. Joseph. After conducting a series of town hall-style meetings in April to gather parishioners’ feedback, the committee submitted its recommendation to the pastors of both Cayuga County clusters.

In late May, Father Frank Lioi, pastor of St. Mary, Ss. Mary and Martha, and Our Lady of the Snow, and Father John Gathenya, then-pastor of Holy Family, St. Alphonsus, Sacred Heart and St. Ann, presented the recommendation to Bishop Matano, with the suggestion that — if it were accepted — the plan be implemented gradually, Father Lioi told the Courier.

The recommendation was discussed at the June 23 meeting of the diocesan Presbyteral Council. Bishop Matano visited Auburn July 13 and again July 15 to discuss the recommendation and hear parishioners’ thoughts. Feedback from those listening sessions will be presented at the next Presbyteral Council meeting Aug. 10, and Bishop Matano has not yet announced whether the four churches will close.

The oucome aside, Fessenden said he thinks the committee’s work has been valuable.

“I’m very hopeful that the planning work that we did at least brought forward to people’s attention the need and the understanding that changes need to be made. There can be a lot of different points of view as to what those changes are, but I don’t think that anyone can deny that changes are needed at this point in time,” Fessenden said.