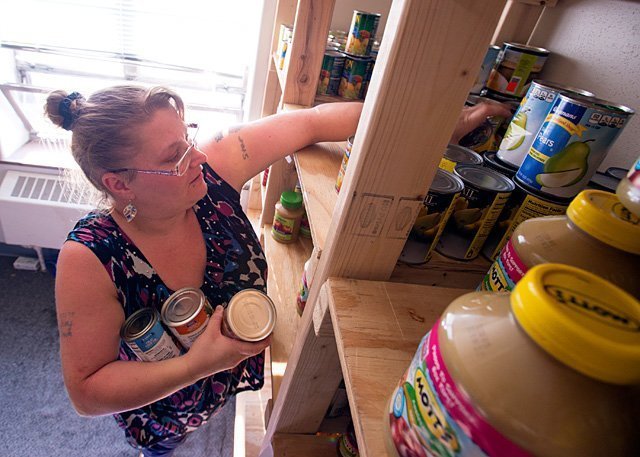 ROCHESTER — Larry White knew there was something different about Joseph’s Place the moment he walked through the doors.

White had come to Joseph’s Place looking for food, but what he found was acceptance and love.

"I had been to different food cupboards, but this was the first one I felt something different about," White said.

Trusting his instincts, White returned to Joseph’s Place for more food a month later, and also asked volunteers if there was anything he could do to help them.

"I wanted to do more because I liked what they were doing. I liked the people, not just the food. It was the welcoming aspect of Joseph’s Place. There’s a sense of ease here," said White, who now is the food pantry’s resource minister.

White’s experience validates the approach taken by the volunteers who run Joseph’s Place, according to Marcus Ebenhoe, the pantry’s executive director. The volunteers see their work at the pantry as a ministry rooted in Catholic social teaching, he explained.

Volunteers from the Cathedral Community opened the pantry in the former convent located across the street from Sacred Heart Cathedral in March 2015 in response to need in the community. Neighborhood residents frequently came to the church looking for food, so several years ago the parish started holding monthly food collections for the local Maplewood Edgerton Ecumenical Kupboard (MEEK), Ebenhoe said. Households may only receive food from that cupboard once every three months, however, and many of the individuals seeking assistance at the cathedral had already used up their supply of food from MEEK and were not eligible to receive more food for several weeks, Ebenhoe said.

Parish staff and volunteers decided to open a food pantry to supplement the work MEEK was already doing. The pantry has grown by leaps and bounds in the 16 months its been open and so far has served approximately 400 families, Ebenhoe said. Joseph’s Place is open three times a month, and volunteers provide food for between 40 and 50 households each time the pantry is open, said Pat Scarbinsky, who with fellow Cathedral Community parishioner Ginny Payne is codirector of Joseph’s Place. Households are eligible to receive food from Joseph’s Place once a month, Scarbinsky added.

Joseph’s Place is different from other food pantries because volunteers put out a buffet of snacks, juice, and peanut butter and jelly sandwiches when the pantry is open, White said. Volunteers also provide coloring books and crayons to keep children occupied while their parents are getting food, and they also allow guests to pick out their own food, he noted.

"We have guidelines that we follow based on family size and how much food from each food group they can take, and it’s their choice as long as they stay within those guidelines," Scarbinsky said.

The food pantry’s guests greatly appreciate having choices because it allows them to be independent and assert some control over their lives, White said. Recognizing and respecting the dignity of guests is a crucial part of the food pantry’s mission and has been since the very beginning, noted Bob DiFulio, chair of the Cathedral Community’s social-ministry committee and one of the founders of Joseph’s Place. Guests at many other food pantries are required to provide proof of identity as well as documentation to prove how many members are in their households, but after much discussion, Joseph’s Place’s organizers decided to only require proof of identification from the head of each household.

"If we ask how many people are in your family and you say five, then we take you at your word," DiFulio said.

This policy may leave the food pantry vulnerable to those who would take advantage of it, but then again, it might have the opposite effect, he said. Guests pick up on the fact that volunteers are trusting them, White added.

"In turn that belief in us, trust in us, makes us trustworthy," he explained.

DiFulio said when guests feel trusted they begin to reveal more about their lives to volunteers, who routinely sit with them to chat. Volunteers also offer guests the opportunity to pray together, and while not every guest wants to do this, many look forward to this shared prayer, White said. Guests who don’t want to share their intentions out loud are invited to write them on slips of paper. These intentions are prayed for by a group of volunteers and sometimes included in the Cathedral Community’s weekend liturgies, Ebenhoe said.

Volunteers also recently opened Joseph’s Attic, which provides donated furniture to those in need, and plans to soon implement programs to help Joseph’s Place guests who are seeking employment.

"We’re building community through service of others," Ebenhoe said.

* The third and fourth Wednesdays of each month from 1 to 3 p.m.