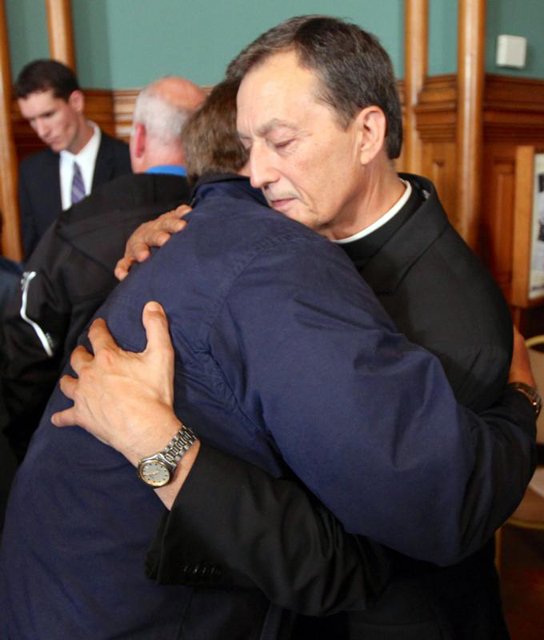 Father Charles Lachowitzer, vicar general and moderator of the curia in the Archdiocese of St. Paul and Minneapolis, hugs an abuse survivor after a news conference to announce a settlement in St. Paul, Minn., in this Oct. 13, 2014, file photo. Pope Francis has decided that national bishops' conferences should choose an appropriate day on which to pray for the victims of sexual abuse.

VATICAN CITY (CNS) — Members of the pope’s commission for child protection, including an abuse survivor, have been speaking with new bishops and major Vatican offices as part of a mandate to develop and educate the church about best practices.

Pope Francis also approved the establishment of a day of prayer for survivors of abuse, but decided it will be up to each nation’s bishops’ conference to decide when the memorial should be held, according a press release Sept. 12 from the Pontifical Commission for the Protection of Minors.

Members of the pontifical commission have spoken recently with officials at the Congregation for Institutes of Consecrated Life and Societies of Apostolic Life, as well as at the Pontifical Ecclesiastical Academy, which trains priests for service in the Vatican’s diplomatic corps.

Marie Collins, a commission member and survivor of clerical abuse, was scheduled to be one of a number of commission members to address the Sept. 11-18 session of what is commonly referred to as "new bishops school."

Jesuit Father Hans Zollner, a psychologist and commission member, and Archbishop Charles J. Scicluna of Malta, a longtime abuse investigator, already delivered their talks on abuse by clergy and the importance of protecting minors and vulnerable adults during the early September seminar for bishops newly elected to dioceses in mission lands.

The commission has completed a template meant to help all church entities — from bishops’ conferences to Catholic associations — in formulating guidelines in preventing and responding appropriately to abuse.

Pope Francis was set to receive the template "shortly," according to the commission press release.

At the request of a clerical abuse survivor from Canada, the commission developed a proposal for a universal Day of Prayer because "prayer is one part of the healing process for survivors and the community of believers" and public gatherings for prayer also help raise awareness about the issue, it said.

Pope Francis received the proposal and has asked "that national bishops’ conferences choose an appropriate day on which to pray for the survivors and victims of sexual abuse as part of a Universal Day of Prayer initiative," it said.

The reason a universal date was not set is because a number of bishops’ conference around the world already have specific days set aside for penance and prayer for victims and their healing, Father Zollner told Catholic News Service.

For example, the church in Australia adopted the nation’s own Day for Child Protection — Sept. 11 — to mark its Day of Prayer.

The Southern African Bishops’ Conferences will dedicate Dec. 2-4 — days which fall during Advent this year — to penance, fasting and prayer, the press release said.

The commission said it has resources like prayers for Mass, liturgical texts and other materials available on request as part of the Day of Prayer initiative.