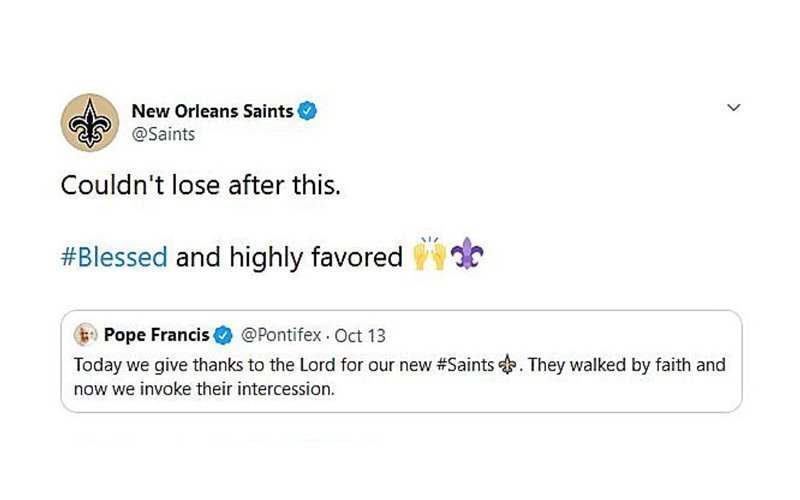 Pope Francis, tweeting about the new saints he recognized Oct. 13, inadvertently used a hashtag connected to the New Orleans Saints football team. But fans appreciated it, as did the team. (CNS photo)

VATICAN CITY (CNS) — A hashtag mix-up caused a papal tweet meant to give thanks for the Catholic Church’s newest saints to be read as Pope Francis showing support for the New Orleans Saints’ football team.

After the Oct. 13 canonization of five new saints, the pope’s official Twitter account, @Pontifex, tweeted: “Today we give thanks to the Lord for our new #Saints. They walked by faith and now we invoke their intercession.”

However, the Twitter hashtag automatically uploaded a fleur-de-lis, the official logo of the National Football League team. Needless to say, the tweet caught the attention of many Saints’ fans, who interpreted the tweet as invoking divine intervention for their team’s game that day against the Jacksonville Jaguars.

“Big Guy telling you something for this afternoon,” a Twitter user said, sharing the pope’s tweet. “Adjust your bets accordingly, Vegas.”

“Time to put 10k on the #Saints,” another Twitter user wrote.

Other fans were elated that Christ’s vicar on earth was in their corner. “Pope Francis told 18 million followers that he was #WhoDatNation. I love it,” another Twitter follower wrote, referring to the New Orleans football team’s “Who Dat” chant.

However, people rooting for other football teams couldn’t hide their dismay. “We lost the pope!” a Twitter user tweeted to the New England Patriots.

But the reaction of the day came from the New Orleans Saints’ own Twitter account after their 13-6 victory over the Jaguars.

“Couldn’t lose after this,” the Saints’ account tweeted after sharing the papal tweet. “#Blessed and highly favored.”

A Vatican official confirmed Oct. 14 that use of the hashtag to trigger the “hashflag” — the fleur-de-lis — was a case of “accidental evangelization,” but hoped that “maybe someone who didn’t know will become aware that there are other ‘saints’ to pay attention to.”