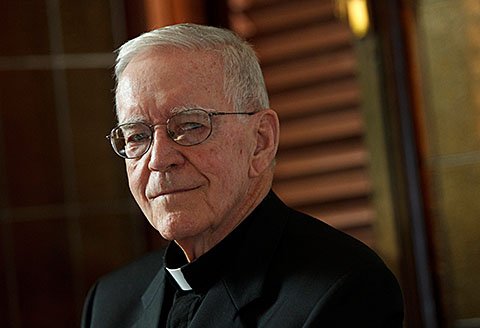 U.S. retired Bishop William John McNaughton, who served as the first bishop of Incheon, South Korea, from 1962 to 2002, is pictured in Rome in this 2012 photo. Bishop McNaughton, 87, spoke with Catholic News Service about Pope Francis' upcoming trip to South Korea.

VATICAN CITY (CNS) — When Pope Francis visits South Korea Aug. 14-18, he will find a Catholic Church that exemplifies much of what he hopes for the church around the world, including a highly active laity, extensive efforts to help the needy and strong relations with non-Christian communities. So says a retired American missionary who spent nearly half a century building up Catholicism in the country.

Bishop William J. McNaughton, 87, arrived in Korea as a Maryknoll missionary in 1954 and served as the first bishop of Inchon from 1962 until his retirement 2002. The bishop, who spoke with Catholic News Service by telephone July 16, will be watching Pope Francis’ visit next month on television from Massachusetts, where he lives with one of his sisters.

"The blood of martyrs is why the church is so strong in Korea," the bishop said, noting the more than 10,000 Korean Catholics killed for their faith between 1785 and 1886, 124 of whom Pope Francis will beatify Aug. 16.

"To this day, they talk about it, they urge people to have the spirit of the martyrs," the bishop said.

One legacy of that persecution is an extraordinarily prominent role for lay Catholics. The church was founded in the late 18th century by laypeople who embraced Catholicism after studying it in books imported from China, and for more than half of its first century, it had to survive without the ministry of clergy.

That tradition manifests itself today in the popularity of ecclesial movements such as the Legion of Mary, Cursillo, Marriage Encounter and the Catholic Charismatic Renewal, Bishop McNaughton says. What’s more, he says, "everybody sings" in church.

In Korea, the "evangelizers are not so much the priests and the sisters as the very persons themselves, the Catholic laity," he said. "Once they get the faith, they propagate it among themselves. They know how to spread the faith."

Yet the bishop, whose achievements included opening a diocesan seminary, notes that Korea has a strong tradition of cultivating native clergy, starting with a clandestine seminary founded in the mountains in 1855. At the end of 2013, according to statistics supplied by the local church, South Korea had 4,261 priests and 1,489 major seminarians out of a total of 5.4 million Catholics (almost 11 percent of the country’s population).

Notwithstanding Korean rulers’ long-standing hostility to Christianity, which was banned until 1886, Bishop McNaughton says the local culture is naturally receptive to it.

One reason is the deep-rooted religiosity, whose traditional forms include Buddhism, Laoism and Confucianism.

"There are very few atheists," said the bishop, noting that he enjoyed cordial relationships with Buddhist monks as well as Methodist and Presbyterian missionaries during his years in Korea.

The typical strength of extended families in Korea is also conducive to Catholicism, since converts tend to share their faith with relatives, he says. Weddings and funerals are especially propitious occasions, where non-Catholic guests can be "edified by the beauty" of the liturgy.

Wakes, at which Korean Catholics customarily sing the vespers of the dead, are particularly impressive to friends and family because of Koreans’ "deep respect for their ancestors," the bishop said.

Catholicism has modified elements of the traditional culture, however. Some of the first women to achieve literacy did so by learning to read the catechism, the bishop notes, and parents today increasingly are willing to let their only sons enter the seminary, even though that means their family name will die with him.

The economic level of Catholics has risen with that of South Korea as a whole, which is today the world’s 13th richest economy. When Bishop McNaughton arrived in the country, most of his flock was poor, but Catholics are now actually wealthier than average, a condition he attributes largely to the excellence of Catholic schools.

The church has channeled some of that wealth into apostolates for the poor, he notes, including the House of Hope rehabilitation center in Kkottongnae, which Pope Francis will visit Aug. 16, and the World Villages for Children, founded by the late Father Aloysius Schwartz, a U.S.-born priest of the Diocese of Busan.

Bishop McNaughton’s account of the church in South Korea is not unremittingly sunny. He says only about 25 percent of Catholics there now attend Mass regularly, and notes that Catholic families have shrunken in conformity to the overall trend, in a country whose fertility rate of 1.25 children per woman is one of the lowest in the world.

These developments reflect a materialism born of prosperity, he says: "When people live well they forget God." Another factor is inadequate catechesis of adult converts, particularly on Catholic moral teaching against contraception and abortion, in the face of government policies promoting population control.

Overall, however, the bishop paints a picture that Pope Francis would likely find inspiring, not least with regard to the sacrament of reconciliation, which the pope frequently exhorts the faithful to receive. Korean pastors keep records of who goes to confession during Advent and Lent so they can encourage the rest to follow suit.

The system is not perfect, Bishop McNaughton admits, ruefully recalling one time he asked two parishioners why their daughter had not been to confession lately — only to be told she had entered a convent.