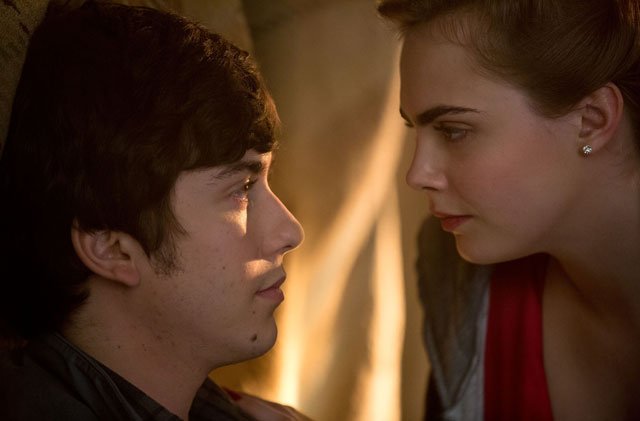 Cara Delevingne and Nat Wolff star in a scene from the movie "Paper Towns." The Catholic News Service classification is A-III -- adults. The Motion Picture Association of America rating is PG-13 -- parents strongly cautioned. Some material ma y be inappropriate for children under 13.

NEW YORK (CNS) — The disillusionment and ennui of high school seniors, always fertile ground for literature, was perfected in films by John Hughes decades ago.

In the case of "Paper Towns" (Fox), a faithful adaptation of John Green’s young-adult novel, the kids discuss their anxieties — and talk, and talk some more — for nearly two hours. Seldom does enlightenment dawn, but they gamely plug away.

The dependable coming-of-age/teen romance formula is supposed to have its characters become wiser as they balance their intense emotions and precocity with the knowledge of looming adult responsibilities. As directed by Jake Schrier from the screenplay by Scott Neustadter and Michael H. Weber, no one becomes much smarter, and it being high school, everyone’s obsessively focused on their upcoming prom.

Sexuality and language issues put this on the adult side of the ledger, but mature adolescents, the target audience, should easily navigate this material.

Quentin (Nat Wolff) and Margo (Cara Delevingne) have been friends since early childhood, when her family moved across the street in a sterile suburb of Orlando, Florida. By senior year, they’ve grown apart, but one night, Margo invites Quentin to help her with a night of criminal mischief against her cheating ex-boyfriend, and their bond is restored.

Margo is intensely world-weary with Orlando’s "paper houses and people," and announces, "I’ve lived here 11 years and I’ve never come across anyone that matters."

Her solution to this is to suddenly run away, a coping mechanism she’s used before. She drops Quentin some spooky scavenger-hunt clues — including one in Walt Whitman’s "Leaves of Grass" — so he can figure out her location.

This sets Quentin, along with friends Ben (Austin Abrams), Radar (Justice Smith), Lacey (Halston Sage) and Angela (Jaz Sinclair) on a quirky 1,200-mile road trip north to upper New York State to find Margo, who is hiding practically in plain sight in a "paper town." That’s a term used by cartographers for invented places they add to maps to keep copyright infringement at bay.

In the safe and snug realm of a Green novel — he also wrote "The Fault in Our Stars" — they’re all good kids, reluctant, unlike Margo, to so much as bend any rules. Margo demands that Quentin become more enlightened and self-aware, but whether someone finds his journey worthwhile depends upon the prism of the age of the viewer.