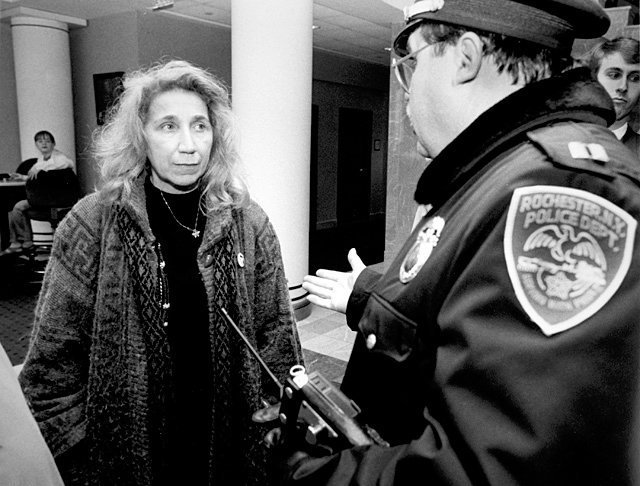 The Catholic Courier included this 1990s file photo in its multimedia project about Sister of Mercy Grace Miller (left).

The Catholic Courier and El Mensajero Católico won a total of 20 awards from two different press associations for work published in 2015.

The Catholic Press Association, which represents more than 600 Catholic publications in the United States and Canada, presented the newspapers with 19 awards during its annual convention in St. Louis June 1-3. The New York Press Association, a trade organization representing the state’s nondaily community newspapers, presented El Mensajero with an award during the organization’s convention in Saratoga Springs April 8-9.

The newspapers received the following awards from the CPA:

Best Freestanding Presentation of Online Photo Gallery or Slideshow: Former Photo Editor Mike Crupi received a first-place award for his photo slideshow of a Field of Honor display in front of Mercy Center in Brighton that commemorated the anniversary of Sept. 11, 2001.

Staff Photograph Jeff Witherow received a second-place award in this category for his photo slideshow of a Lighting of Remembrance at Ascension Garden in Henrietta in December 2015.

"Very good visual story told in the collection. Some excellent individual photos. Excellent visual quality and use of multiple perspectives," the judges said.

Best Web and Print Combination Package: Crupi, Witherow, Staff Writer Annette Jiménez and Brendan Parker, a Web and media specialist with the Diocese of Rochester, won second place for their October article and multimedia project on Sister of Mercy Grace Miller, founder of the House of Mercy, a Rochester homeless shelter.

"Exceptional content and profile subject. Excellent use of both audio and video content to correspond with textual and visual context. Very nice overall conceptualization and execution of print and, in particular, web content presentation," the judges commented.

Individual Excellence — Photographer: Crupi was awarded second place for a body of work from 2015.

"Covered a wide range of topics from the Papal visit to a Catholic Youth basketball game," the judges wrote. "Action shots were clear and well done. Photos elicited a strong response. Could feel the emotion in the pictures.

Individual Excellence — Videographer/Video Producer: Third place went to Witherow for a body of his work from 2015.

"This submission shows a great deal of versatility. From serious news stories to soft, evergreen pieces, this producer covers each topic with a keen eye. Audio soundbites and critical interviews round out the coverage and help the viewer follow the story. The wage protest story is exceptional. Additional sequences might enhance the existing works and make the overall submission a stronger candidate."

Best Multiple Picture Package Originating with a Newspaper — Feature Package: Crupi won second place for a series of photos from a Living Stations of the Cross performance by youths from Blessed Trinity/St. Patrick parishes in Tioga County. The photos appeared in the Courier’s February 2015 Southern Tier regional section.

Best coverage of Vocations to Priesthood, Religious Life or Diaconate — Non-Weekly Diocesan Newspaper, Circulation 25,001 or More: Second place went to the Courier staff for the May 2015 "Milestones and Vocations" edition.

"The diversity as well as commonality of four new priests, along with comments from others, highlight this extensive section which also includes reflections by retired priest and sketches of long-serving priests, deacons and sisters. Writing, presentation and approach make this a remarkably well put together section," the judges said.

Best In-Depth Analysis: First place went to Jiménez and former Staff Writer Amy Kotlarz for a yearlong series of stories on poverty in the Diocese of Rochester.

"Extraordinary coverage, worthy of a national newspaper," the judges wrote. "Properly sourced data accompanied by a reflection on Catholic values."

Best Online Presentation of Multimedia Visuals: Witherow received a second-place award for a video on "Barakoa: The African Masquerade," an exhibition of masks, music and dance representing Latin American, Caribbean and African cultures.

"Well-researched video that goes beyond the impact of the images to discuss significance and historical context," the judges said.

"Good use of video and multimedia to enhance stories and content," the judges remarked.

Individual Excellence — Writer: Jiménez won first place for a body of work from 2015.

"These pieces are very well researched and put together. Very difficult subject matter is analyzed in a fair and simple manner. Annette Jiménez’s approach of personalizing her stories on social struggles is effective. She explains and works to engage," the judges wrote.

"Excellent, tight editorial focus on child development, education, poverty. Effort is made to write human-interest leads and cover the local area with features. Great photos. The issues lack only a "splash" element. And the feature writing could be deeper. This is a strong, hard-working newspaper," the judges commented.

Best Multiple Picture Package Originating with the Publication — Feature: First place went to Crupi for his series of photos of "Barakoa: The African Masquerade" that were published in the May 2015 edition.

Best Photograph Originating with the Publication — Feature Photo: Witherow received second place for his photo of a fireman saluting during the National Anthem as it was sung during the opening ceremony of the 46th-annual Puerto Rican Festival in Rochester.

Crupi won third place in this category for his photo of a young participant in "Barakoa: The African Masquerade."

"Wonderful moment captured. Intriguing story and visual dialogue represented in juxtaposition of subject-matter. Engaging and delightful perspective and use of color," the judges wrote.

El Mensajero received the following award from the NYPA:

In-Depth Reporting, 12,001-plus circulation: Jiménez and Kotlarz won third place for a yearlong series of stories on poverty in the Diocese of Rochester.

"Excellent reporting and sourcing," the judges wrote. "The difference in these stories and others in the category was the use of people. Most stories led with a person’s voice, and followed up with a strong nut graph giving context. Only then did the stories go into statistics, trends and other salient details. Great job."