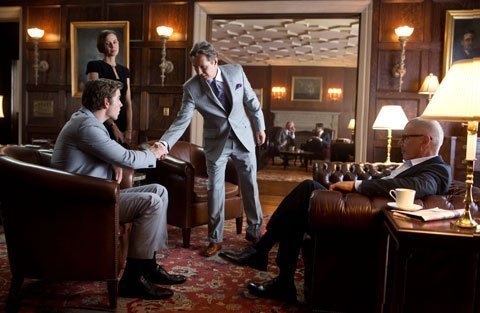 NEW YORK (CNS) — Though the twisting path of its plot feels well-rutted, the corporate conspiracy thriller "Paranoia" (Relativity) does chart its protagonist’s journey to a morally respectable version of personal redemption.

Along the way, viewers are invited to join him in rejecting the ethical nihilism that frequently surrounds him in the cutthroat milieu that provides the film’s setting — and to embrace old-fashioned standards of right and wrong instead.

The flagrant character defects our future hero initially displays show just how far he has to go: Consumed by materialistic visions of the good life, and by envy-driven ambition, computer whiz-kid Adam Cassidy (Liam Hemsworth) does not react well to being professionally thwarted.

So when a pitch to his callous boss, Nicholas Wyatt (Gary Oldman), goes horribly wrong and gets his entire tech team fired, Adam seeks revenge by using his company credit card to fund a high-rolling nightlong bender for himself and his unfortunate colleagues.

Waking up beside the fetching stranger who caught his eye on the dance floor during the binge — and whose name he still doesn’t know — Adam finds he has more to cope with than just social awkwardness and a hangover. Hauled into Wyatt’s office, he’s given an unpleasant choice: Face prosecution for his illicit expenditure or cooperate in Wyatt’s plan to bring down rival CEO Jock Goddard (Harrison Ford).

Once Wyatt’s mentor and partner, Goddard has become his prime competitor and bitterest enemy. Wyatt wants Adam to infiltrate Goddard’s outfit so he can gain access to the game-changing new product they’re about to launch.

Once undercover, Adam falls for Emma Jennings (Amber Heard), one of Goddard’s top executives. He also finds himself drawn to Goddard, whose polished manner is a welcome contrast to Wyatt’s brutish demeanor.

Back home, Adam resolutely ignores the sensible guidance offered him by his working-class father Frank (Richard Dreyfuss). After all, he reasons, what would someone who stayed in the same job his whole life and who showed no longing for wealth or power know about anything?

As Adam works his way back to the positive values with which he was raised, he finds an acceptable (though farfetched) resolution to his professional dilemma and deepens his bonds with Emma.

Though the two gradually move toward genuine commitment, as earlier scenes have shown us, both Adam and Emma operate from the flawed premise that romantic relationships begin with a physical connection and either flourish or wither away after that.

Overall, "Paranoia" conveys a sound enough message, but the story used to deliver it seems stale.

The film contains some action violence, semi-graphic premarital sexual activity, an off-screen casual encounter, numerous sexual jokes and references, a couple of uses of profanity, at least one rough term and occasional crude and crass language. The Catholic News Service classification is A-III — adults. The Motion Picture Association of America rating is PG-13 — parents strongly cautioned. Some material may be inappropriate for children under 13.