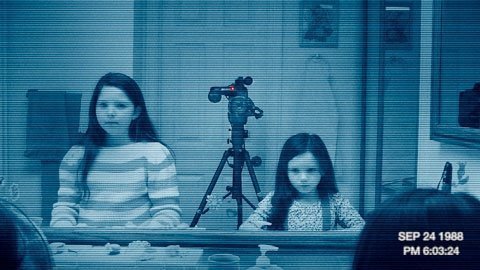 NEW YORK (CNS) — The "Paranormal Activity" franchise, which began in 2009, has provided a forceful illustration of the genuine jolts that can be exacted from an audience without resort to the bucket-of-blood approach that characterizes all too many contemporary horror films. In that respect, "Paranormal Activity 3" (Paramount) continues a commendable tradition.

Nevertheless, the satanic elements of the plot that eventually come to the fore will make even many adults want to steer clear of this latest installment, as too may the vulgar language indulged in by the startled.

In what amounts to a prequel — once again we’re in Carlsbad, Calif., but this time in 1988 — the two sisters whose adult encounters with evil were "documented" in the previous brace of movies are seen as children. Katie (Chloe Csengery) and Kristi (Jessica Brown) live with mom Julie (Lauren Bittner) and their freshly minted stepdad Dennis (Chris Smith).

Dennis is a videographer who makes his living taping social occasions. For no very apparent reason, other than the convenience of the real-life filmmakers, he sets up cameras around the house just as ominous doings begin to befall.

Directors Henry Joost and Ariel Schulman follow a tried and true formula to deliver mostly gore-free chills. But, as the malevolent spirit behind this latest spate of eerie occurrences is gradually revealed to be more demon than poltergeist, witchcraft and Satan worship become integral to the story line.

Though not explicit, a scene in which marital relations between Julie and Dennis get well under way — only to be put on hold by something going bump in the night — is fairly extended. And Christopher Landon’s script presents it as humorous when Julie lights up a joint, only to get a cliched case of the munchies.