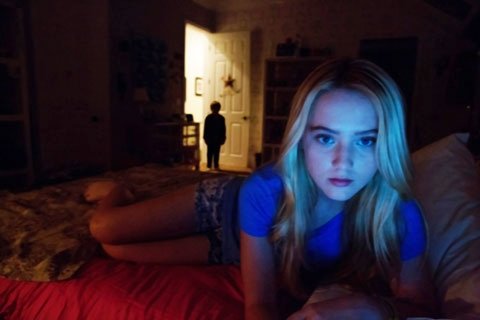 The setting is still suburbia — suburban Nevada, to be precise — but the focus has shifted to the younger generation. Teen couple Alex (Kathryn Newton) and Ben (Matt Shively) find their lives disrupted in increasingly eerie ways after her parents (Stephen Dunham and Alexondra Lee) take in her little brother Wyatt’s (Aiden Lovekamp) weird playmate Robbie (Brady Allen). Robbie needs shelter because his reclusive single mother Katie (Katie Featherston) — a character who has figured prominently in the earlier outings — has been hospitalized.

The found-footage conceit that allows us to peek in on the nerve-jangling events that follow becomes strained at times, leaving moviegoers to wonder who would continue to carry a camera around with them while being terrorized by demons. But the comparatively restrained mayhem that has made this series more commendable than many of its genre competitors endures.

Things get grim but never gory, and the cliched convention of randy adolescents getting a knife to the heart while indulging in bedroom antics is studiously avoided. In fact, in one early scene, Alex barely tolerates Ben’s awkward placement of a hand on her thigh. Thereafter she casually brushes off his verbal advances.

Part of the pagan mumbo jumbo the duo stumbles across on the Internet — someone needs to tell Alex how to pronounce Hittites — involves the idea that the victims these particular evil spirits target must be "inviolate." The ensuing dialogue makes it clear that both Alex and Ben are virgins — his feeble protestations to the contrary notwithstanding.

Both young leads often express their shock or amazement via expletives, however, and — realistically enough — Ben likes to indulge in sexual banter of the boastful or wishful-thinking variety. Still, adults in search of enjoyably chilling diversion will continue to find far less to repel them in these proceedings than they would in sequels about doomed dates — be it "Friday the 13th" or "Halloween."

The film contains a few scenes of harsh but bloodless violence, some sexual and scatological humor, a few uses of profanity, about 20 rough and crude terms and references to occult hokum. The Catholic News Service classification is A-III — adults. The Motion Picture Association of America rating is R — restricted. Under 17 requires accompanying parent or adult guardian.