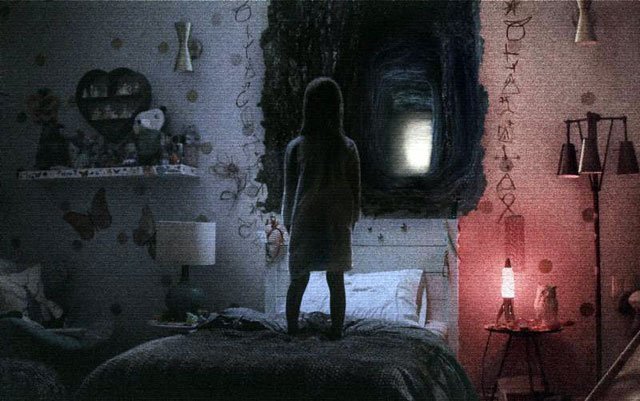 Ivy George stars in a scene from the movie "Paranormal Activity: The Ghost Dimension." The Catholic News Service classification is A-III -- adults. The Motion Picture Association of America rating is R -- restricted. Under 17 requires accompanying parent or adult guardian.
By John Mulderig
Catholic News Service
NEW YORK (CNS) — A horror franchise once noted for its restrained use of violence and clever methods of building suspense reaches the point of creative exhaustion with its sixth — and apparently final — chapter, "Paranormal Activity: The Ghost Dimension" (Paramount).
Though there’s a crass tone to some of the dialogue and the plot eventually incorporates a dodgy Catholic clergyman, audiences are more likely to be bored than offended by director Gregory Plotkin’s dry rehash of the franchise’s familiar elements. The use of the found footage pretense that underlies the series as a whole, for instance, now requires the willing suspension of all common sense.
And then there are the inky apparitions zooming out at viewers in largely pointless 3-D. Their obtrusive presence only serves to emphasize the effectiveness of the earlier films’ reliance on unsettling implication — and on observed results lacking apparent causes.
This installment, which connects back to previous portions of the saga through a variety of tie-ins, introduces us to average Santa Rosa, California, couple Ryan (Chris J. Murray) and Emily (Brit Shaw) Fleege. With Christmas approaching, this unremarkable duo receives a mostly unwelcome visit from
Ryan’s smart-alecky brother, Mike (Dan Gill). Though he seems anything but emotionally fragile, Mike is on the rebound, so we’re informed, after being dumped by his girlfriend.
Hippy-dippy Skyler (Olivia Taylor Dudley) also comes to stay, though her social pedigree — whether friend, relation or New Age spiritual adviser — is never clearly explained. Skyler’s function within the plot, at least, is more obvious: She’s there to be on the receiving end of Mike’s clumsy advances and to lend a yoga-loving perspective to the supernatural events about to unfold.
Those developments swirl around Ryan and Emily’s young daughter, Leila (Ivy George). Leila has suddenly cozied up to a mostly invisible but not-so-imaginary friend named Toby — and he’s coming to take her away, ho, ho!
Clues to Toby’s identity are found among the old videotapes Ryan recently uncovered in a trove of goods he had hitherto inexplicably failed to notice.
Said cache also contained an outmoded camcorder capable of documenting strange phenomena invisible to more up-to-date devices.
And the machinery on which to play the VHS tapes? Ryan has just the antique item required — he uses it, he explains, to watch vintage porn movies he swiped from his dad. Though Dad is presumably gone, his lust lives on; how nice.
With dreamy Skyler clearly no match for Toby’s malevolence, rosary-owning Emily calls the local rectory for backup. The church cavalry arrives in the earnest person of Father Todd (Michael Krawic).
A hipster who wears blue jeans along with his clerical shirt, Father Todd wastes no time on caution or consultation before breaking into full-blown exorcist mode. As befits such rashness, he gets a nasty reaction and temporarily skedaddles.
In the choicer entries among this movie’s predecessors, long periods of inactivity observed by unsleeping lenses helped inspire a sense of dread. But that effect has long since disappeared, leaving behind only a tedious residue of artifice and slowly passing time.
Toby or not Toby? We’d advise the latter option.
The film contains occult themes, sometimes harsh but mostly stylized violence with minimal gore, a glimpse of sexual activity, benignly viewed drug use, a few instances of profanity and frequent rough and crude language. The Catholic News Service classification is A-III — adults. The Motion Picture Association of America rating is R — restricted. Under 17 requires accompanying parent or adult guardian.
– – –
Mulderig is on the staff of Catholic News Service.
Copyright © 2023 Catholic News Service, Inc. All rights reserved. Linking is encouraged, but republishing or redistributing, including by framing or similar means, without the publisher's prior written permission is prohibited.