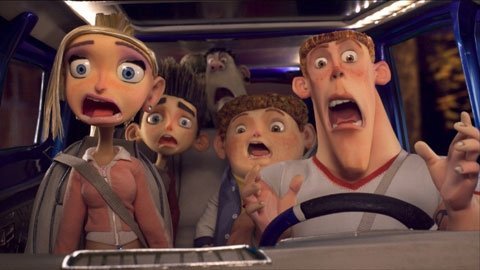 NEW YORK (CNS) — Though the horror-themed animated adventure "ParaNorman" (Focus) is obviously directed at children, it includes a smattering of sexual humor and, more significantly, a concluding plot twist that ought to put parents of faith on their guard. That’s all the more unfortunate since co-directors Sam Fell and Chris Butler’s frequently witty stop-motion celebration of the macabre has a basic message to convey that’s valuable for adults and kids alike.

The story focuses on Norman Babcock (voice of Kodi Smit-McPhee), an 11-year-old boy whose ability to communicate with ghosts — principally his beloved Grandma (voice of Elaine Stritch) but also deceased strangers whom he passes in the street — has caused him to be shunned and bullied by his unbelieving peers.

Things only get more complicated for Norman when his eccentric great-uncle Mr. Prenderghast (voice of John Goodman) calls on him to save their Salem-like hometown from the apocalyptic fulfillment of an 18th-century witch’s (voice of Jodelle Ferland) curse.

Soon Norman is battling the enraged spirit of the falsely accused sorceress, as well as the zombielike specters of the puritan judges who condemned her, through all manner of spooky environments.

He’s helped along the way, with varying degrees of enthusiasm, by his tubby best friend and fellow outcast Neil (voice of Tucker Albrizzi), his cheerleader sister Courtney (voice of Anna Kendrick), school quarterback (and Neil’s older brother) Mitch (voice of Casey Affleck), and even by reformed bully Alvin (voice of Christopher Mintz-Plasse) whom the sight of the sprites has scared straight.

What Norman’s quest principally teaches us is that evil acts are often motivated by fear and that the vengeful desire to retaliate in kind only makes things worse. Needless to say, that’s an outlook that squares completely with Judeo-Christian values.

Butler’s screenplay, however, which dabbles in sexual humor throughout, concludes with the ironic revelation that a seemingly he-man male character has a boyfriend. However brief and however humorously intended, the scene nonetheless clearly sends a signal that such a relationship ought to be as nonchalantly accepted as it is matter-of-factly announced. As such, it is grievously out of place in a film directed at children.

The film contains acceptance of homosexual acts, some sexual and scatological jokes and potentially frightening scenes of peril. The Catholic News Service classification is A-III — adults. The Motion Picture Association of America rating is PG — parental guidance suggested. Some material may not be suitable for children.