Parents are the best advocates for kids - Catholic Courier 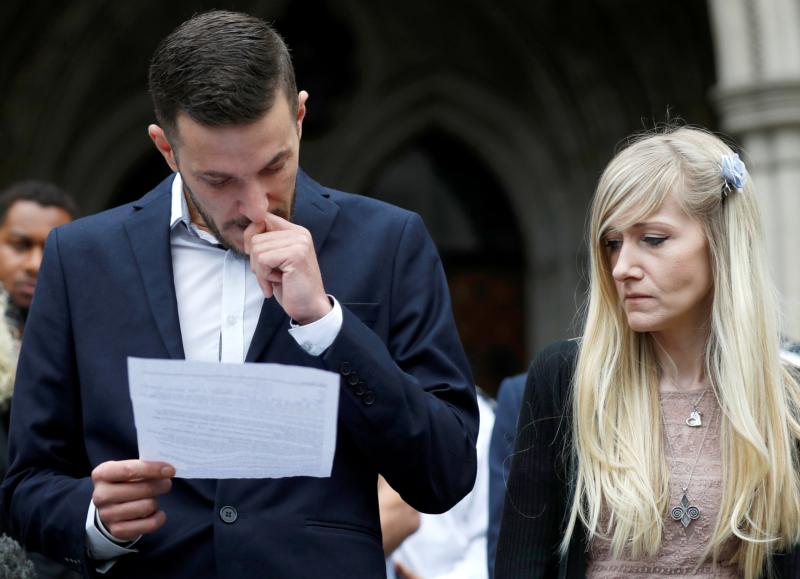 Connie Yates and Chris Gard read a statement outside London's High Court July 24 after a hearing on their baby's future. The British couple's baby, Charlie Gard, who was at the center of a legal battle that captured the world's attention, died July 28, just over a one week before his first birthday.

Pope, others pray as parents of Charlie Gard end legal struggle for help

A seriously ill 11-month-old child in Great Britain has garnered the attention of President Donald Trump and Pope Francis and sparked an international debate.

Charlie Gard is unresponsive and totally dependent due to a severe genetic defect that compromises his brain cells’ metabolism. His parents want to sustain his life and transfer him to an American hospital for a highly experimental treatment — one that has benefited children with a similar but far less serious condition.

But the hospital caring for Charlie wants to remove the ventilator keeping him alive and provide only palliative care while he dies. British courts have sided with the hospital, though the parents have raised the funds for treatment and ask only to be allowed to transfer Charlie from this hospital’s care.

What does Catholic teaching have to say about a case like this?

First, our moral tradition distinguishes between ordinary and extraordinary means (or proportionate and disproportionate means). We must assess the expected benefits of treatment in light of the risk, suffering, cost and other burdens they may impose on the patient.

We are morally obliged to accept treatment that offers benefit without entailing greater burdens. Catholic tradition does not teach a “vitalism” insisting that everything possible must always be done to prolong life.

Second, if a treatment is extraordinary, it is morally optional, not forbidden. Pope Francis could hardly have offered his own hospital in Rome for care of Charlie if such care were against Catholic teaching.

Third, such judgments must respect the inherent dignity of each human person. The church rejects discriminatory judgments that the very life of a person is useless or a burden due to physical or mental impairments.

In 2004, speaking of patients with very severe brain damage, St. John Paul II said that “even our brothers and sisters who find themselves in the clinical condition of a ‘vegetative state’ retain their human dignity in all its fullness. ‚Ä¶ The value of a man’s life cannot be made subordinate to any judgment of its quality expressed by other men.”

The hospital and the judge in Charlie’s case seem to have made such “quality of life” judgments. The hospital cited his cognitive state to argue that “this situation is not a tolerable one to leave a child in.”

The judge agreed, saying that in light of Charlie’s diminished brain function, “How can he be any better off than he is now?” This approach has grave implications for people with intellectual disabilities.

Fourth, because judgments about burden and benefit have an inescapably subjective or personal dimension, we have to ask: “Who decides?” Catholic documents say the patient is the primary decision-maker; then loved ones who can speak for the patient; then doctors. These documents seldom mention judges.

This is the decisive point. In a situation with many uncertainties, but a consensus that Charlie’s parents love him and want the best for him, their right to make decisions for their child should prevail.

And here British law stumbles. When doctors and parents disagree, British judges simply make their own independent judgment as to what is in the child’s best interests. In American law, parents’ right to make decisions for their children is strongly affirmed, to be overridden only in cases of abuse or clear evidence of harm — which is not the situation here.

The American tradition reflects Catholic teaching. When they are not acting against the demands of human dignity, parents are the best advocates for their children’s rights. The courts should step back and let Charlie live, for as long as he will live, in the embrace of the family that loves him.