Parents have crucial role in righting the church - Catholic Courier 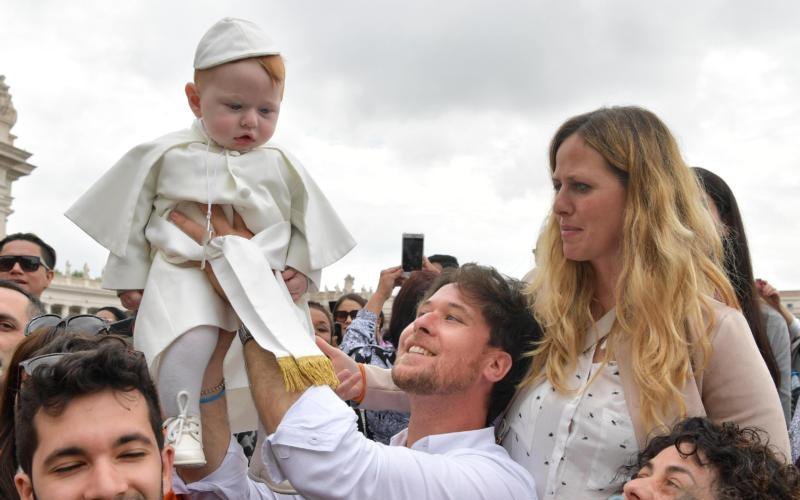 Parents lift a child wearing a pope outfit during the general audience in St. Peter's Square at the Vatican May 9. (CNS photo by Vatican Media via EPA)

Next month, Pope Francis will host a synod of bishops on the theme of “Young people, faith and vocational discernment.”

This may seem uncomfortable, even incongruous, given the crisis the church faces today. Some have asked the Holy Father to put off this synod and concentrate instead on the meeting he has convened for next February to discuss the crisis.

For my own part, I think there’s a strong argument for going ahead with the synod on youth right now. The faith of the world’s young people is precisely what the present crisis is destroying. It will not be enough, though it is certainly necessary, for the church to root out the evil in her midst and bring about some semblance of justice. She also needs to tend to the generation whose faith in God has been impaired by these depraved shepherds.

Here at Catholic University, we are giving a lot of attention to the role of the laity in the church and what they can do to right the ark in these rough seas. Theologians are looking at Lumen Gentium, the Second Vatican Council’s Dogmatic Constitution on the Church. It’s no accident that Lumen Gentium speaks first about the people of God, before going on to discuss the respective roles of the hierarchy and the laity: “Each of them in its own special way is a participation in the one priesthood of Christ.” Out of this crisis may come a new understanding of that prophetic observation.

But the most important thing the laity can do to rebuild the church is to raise their children in the faith. This isn’t a novel observation. Lumen Gentium itself observes that “the family is, so to speak, the domestic church. In it parents should, by their word and example, be the first preachers of faith to their children.”

A child may see her bishop only at confirmation, her parish priest only once a week. Until she goes to school, her parents are with her day and night. Before she begins to speak, they teach her how to pray. They bring her to Mass when she is more interested in Cheerios than in the sacrament.

Elizabeth Anscombe, the great analytic philosopher and mother of seven, has a wonderful essay about teaching children the doctrine of transubstantiation. It’s best done at Mass, she says, when a child is just learning to speak. At the moment of consecration, the child can connect the thought and the action: This is Jesus now before us. And implicit in the lesson is our belief in the divinity and the resurrection of the Lord.

No one but a parent can do this. The priest can’t interrupt his own celebration of the Mass to offer the explanation. The teacher in a classroom has missed the moment; the lesson becomes abstract. And none of them has the massive reserve of trust a parent draws upon in teaching lessons of faith.

I’m a grandfather, and I still find myself invoking my mother’s axioms about putting silver knives in the dishwasher and handling colicky babies.

At the present moment, this may be the most important advantage parents have in handing on the faith. Catholics are experiencing a crisis of confidence in the hierarchy, but the loss of trust does not go all the way down. If we earn our children’s faith in us, we can still be heralds of the faith. My sense is that this extends to our parishes as well, the communities where Christian families live their liturgical life.

Let’s make sure we are worthy of the trust reposed in us. There’s a lot riding on it right now.