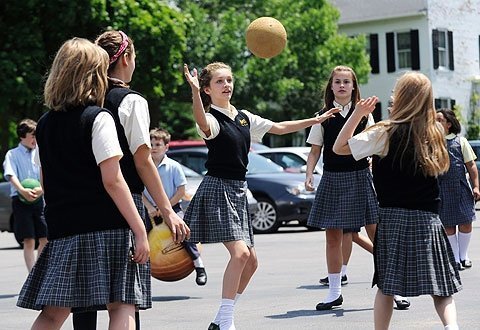 Some teams’ uniforms include jerseys, helmets and cleats, while others feature plaid jumpers, polo shirts and navy-blue dress pants.

If you think the latter uniforms sound like the ones worn by Catholic-school students, you’re right. These students are united by their uniforms, which cultivate school spirit and promote a sense of pride, said Jen Bergeron, the mother of a recent graduate of St. Rita School who also has two children who currently attend the Webster school.

"We are a team, and this is our team uniform," Bergeron explained.

School uniforms give students a sense of identity and belonging, and make the school community seem like a family, added Sister Katherine Ann Rappl, RSM, principal of St. Rita.

"The little kids wear it so proudly. Our kindergartners don’t wear uniforms, so when they come into first grade with their uniforms on they’re so proud," Sister Rappl said.

Bergeron said her kids don’t mind wearing their uniforms, and Bergeron herself is one of the biggest cheerleaders of St. Rita’s uniform policy. Uniforms make her life easier because they eliminate the need to decide — and sometimes negotiate about — what clothes her children will wear to school each day. School uniforms help streamline families’ morning routines, agreed Christina Pearson, whose two daughters attend Seton Catholic School in Brighton.

"I am pro-uniform. On a practical level it takes the guesswork out of what (the kids) wear in the morning. All in all it makes life easier," she said.

Pearson said she and many of her fellow Seton parents have found that dress-down days at Seton are fraught with the kind of stress the uniform policy typically helps them avoid. Even though she helps her daughters choose their outfits for dress-down days ahead of time, oftentimes when the morning of the dress-down day arrives her girls have changed their minds, she said. Seton parents aren’t the only ones dealing with such struggles, Sister Rappl said.

"Some parents have remarked that on a day when they’re out of uniform, the kids have such a hard time choosing what they’re going to wear, and sometimes they choose things that Mommy and Daddy don’t like and they have arguments in the morning," Sister Rappl said.

Students also tend to be more restless and fidgety in school on nonuniform days, probably because they’re out of their routine, she said. Students tend to focus more on learning and less on what they and their peers are wearing when all the children are wearing uniforms, added Pearson, speaking from her experience as a parent as well as a graduate of Catholic elementary and high schools. Students, especially those in the older grades, can’t compete with each other to see who’s wearing the trendiest or most expensive clothes if everyone in school is wearing the same uniform.

"I think that once everyone is dressed appropriately in the morning, their focus is not on who is wearing what or where they shop or what brand they are wearing today. It’s more on community and teamwork and learning. It just takes some of the peer pressure out of the equation. When everyone is wearing the same thing, they’re all on the same playing field. It’s a sea of blue, white and plaid," Pearson said.

Uniforms can cut down on bullying since bullies won’t be able to make fun of what other students are wearing, and uniforms also make it less evident which students come from poor families and which come from affluent families, Sister Rappl said. Uniforms also can help families save money, added Liz Connor, mother of one current St. Rita student and one graduate. If parents don’t mind doing laundry frequently, they only really need two sets of uniforms for each student, one to wear while the other is in the wash, she said. And even when parents do buy more than two sets of uniforms, they’re likely still spending less than they would if their school didn’t have a uniform policy, she said.

"I don’t need to buy a lot of clothes. A couple of outfits of street clothes is all we need," she added.

"I find it to be more reasonable than if I had to shop and buy a whole wardrobe. You can buy the polo shirts at Wal-Mart or you can buy them at Gap, it’s your choice," Pearson added.

Many schools, including St. Rita and Seton, make uniforms even more affordable by having used-uniform sales once or twice a year. Parents donate their children’s outgrown uniforms to the school, which then sells them to other parents at a deeply discounted cost, often as a fundraiser for the school, Pearson said.

Most Catholic schools’ uniform policies also allow students a little bit of flexibility and room for individual expression. At Seton, for example, girls can either wear a jumper and blouse or a polo, turtleneck or blouse with dress pants or dress shorts.

"Most kids can find something they like to wear and are comfortable with," Pearson said.