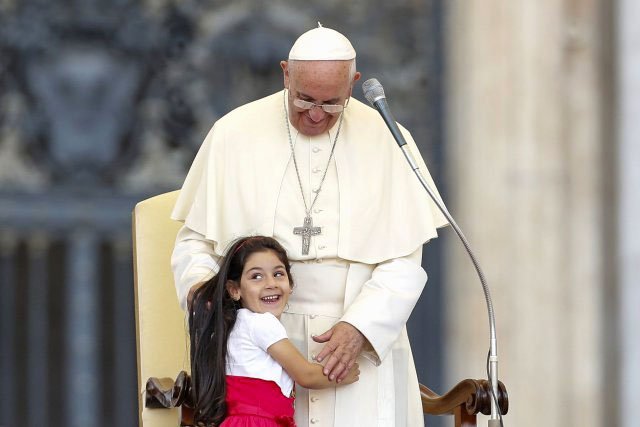 A young girl smiles as she embraces Pope Francis during an audience for families participating in the pastoral conference of the Diocese of Rome in St. Peter's Square at the Vatican June 14.

VATICAN CITY (CNS) — Children need to see their parents kiss each other, complement each other and resolve arguments peacefully, Pope Francis said.

"Dear parents, your children need to discover by watching you that it is beautiful to love another," the pope told parents participating in the annual pastoral conference of the Diocese of Rome.

Parents with their children preparing for first Communion and confirmation, catechists and priests joined the pope for an evening meeting in St. Peter’s Square June 14. The event marked the beginning of the diocesan conference, which focused this year on transmitting the faith.

As the pope entered the square, he pointed to two boys wearing yellow shirts and invited them to climb into the popemobile to help him greet the crowd.

Although he had a prepared text, he made long impromptu additions to his speech, including recounting the story of a little boy who told the pope he had seen his parents kiss. It is a "beautiful witness," the pope said.

Children watch their parents carefully, the pope said. "They watch a lot and when they see that dad and mom love each other, the children grow in that climate of love, happiness and security."

And they suffer when they see "dad and mom every single day screaming at each other, insulting each other, maybe even hitting each other," he said. "Dad and mom, when you fall into these sins, do think about the fact that the first victims are your children, your own flesh?"

A man and a woman who love one another and decide to marry and start a family, the pope said, have the exulted vocation of being similar to the triune God: loving one another in their differences and creating new life.

"Being parents is based on the diversity of being male and female, as the Bible reminds us," he said. "This is the first and most basic, constitutive difference in the human being."

Pope Francis insisted parents must attentively counter the "ideological colonization" of their children, including when they are told by teachers or informed in their school books that differences between male and female are unimportant or are invented social conventions.

Marriage, he said, is a call "to love one another with their differences" and to help the other become "more a man and more a woman. This is the artisanal work of marriage and the family each day: helping one another grow, thinking of the other, the husband of his wife and the wife of her husband. This is communion."

In a world where people often are afraid of differences, Christian couples need to show first their children and then their societies that differences are a source of enrichment because it "becomes complementarity, but also reciprocity."

Growing up, children need to see what it means to be a man or a woman and to have proof that their parents’ differences are something positive, Pope Francis said.

"We men learn to recognize, through the women we meet in our life, the extraordinary beauty that women bear. And women make the same journey (of discovery), learning from men that man is different and has his way of feeling, understanding and living," the pope said.

Pope Francis also told the families gathered for the evening meeting that when they experience real difficulty, they have an obligation to their children to seek help and support.

And if they get to the point where "separation seems inevitable," he said, "know that the church holds you in its heart and that your educating role does not end: you are and will always be dad and mom."

Even if couples are unable to live together, the pope said, they must find a way to work together harmoniously.

"Please, do not use your children as hostages!" he said. "Never, ever speak ill of the other to your children! Never! They are the first victims of this battle between you."