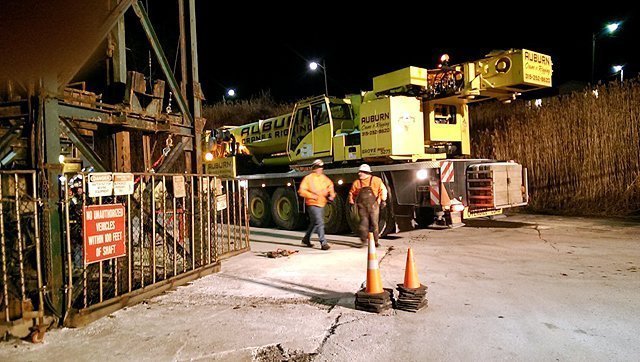 Workers prepare to lift trapped miners out of an access shaft at the Cargill Salt Mines in Lansing, Tompkins County, Jan. 7.

LANSING — Anne Drake acknowledged that being roused at odd hours is old hat in her home due to her husband, Richard, and daughter, Rebecca, who both serve with the Lansing Fire Department.

"That pager goes off at any time," she remarked.

Even so, the phone call that Drake received at 3 a.m. on Jan. 7 rated as quite out of the ordinary. On the other end of the line was Rebecca, who was serving on a fire-department command post at the nearby Cargill Salt Mine.

Rebecca had disturbing news: Seventeen Cargill miners were stuck in an elevator shaft, some 900 feet below ground.

She also had a request for her mom, an active member of All Saints Church: Could the miners’ families be sheltered at the church while rescue operations took place?

Drake immediately called AnnMarie Hautaniemi, the parish’s administrative assistant, to note that she would unlock the parish center and stay with anyone who stopped there. By 3:20 a.m. Drake, who is All Saints’ head usher as well as an extraordinary minister of holy Communion, was opening up shop. Over the next few hours, the hall became occupied by several families as they anxiously awaited the miners’ rescue.

The crisis had begun in the late night of Jan. 6 at the salt mine, located less than two miles from All Saints on Cayuga Lake’s southeastern shore just north of Ithaca. While beginning an overnight shift, the 17 miners became stuck far underground when their elevator system broke down. Emergency crews quickly responded to the scene, and arrangements were made to bring in a crane from a private Auburn company to perform the delicate process of lifting the men — ranging in age from their 20s to 60s — up the shaft and back to safety.

Back at All Saints, Drake was joined by representatives from the local Red Cross who helped her in providing breakfast food and drink. Also on hand was a member of the sheriff’s department to shield families from potential media attention.

The first family member arrived shortly after 5 a.m. Drake, who estimated that about half the miners’ families eventually showed up, said she spent much of the time offering encouraging words and that Father Malachy Nwosu — pastor of the cluster of All Saints, Holy Cross in Dryden and St. Anthony in Groton — spoke to families as well. Not surprisingly, the mood during this time was low-key.

"It was somber. They didn’t know what to expect," Drake said, noting that a spokesperson from Cargill was stationed at the parish center to provide families with frequent updates on the rescue effort.

Finally, beginning at approximately 7 a.m., the first of the miners was brought back to ground level. Over the next 90 minutes all of them were hoisted, a few at a time, in a basket attached to the crane that was lowered nearly 1,000 feet down the shaft where the workers had waited for 10 chilly hours.

In the end, all were rescued safely. As the morning went on, miners began arriving at the parish center to reunite with their families.

"It was very emotional. Each time they walked in, everybody burst into applause," said Drake, who stayed at the parish center until the last of the families went home around 10 a.m.

The incident in Lansing ended up making national news, thrusting the Tompkins County town of 11,000 into the spotlight. Drake and Hautaniemi, who both grew up in All Saints Parish, said mishaps of this type are highly unusual at the Cargill mine, which has been in operation for close to 100 years. The facility employs approximately 200 people, producing mostly road salt derived from mines running under Cayuga Lake. Drake and Hautaniemi noted that the mishap could have been much worse, with the elevator getting stuck only 900 feet down a 2,300-foot shaft that is among the deepest in North America.

All Saints’ role during the Jan. 6-7 crisis netted the parish a letter of thanks from Cargill that was posted on the parish center’s bulletin board. Drake and Hautaniemi said it mattered little that none of the miners belong to All Saints, noting that area churches, businesses and individuals are concerned first and foremost about the common good.

"Lansing is like that. It is a community of good, caring people who come together quickly, at all hours, in an emergency," Hautaniemi remarked.

Although Drake downplayed her own effort, Hautaniemi asserted that she deserves the lion’s share of credit as far as All Saints’ role went.

"We thank God for Anne Drake and her willingness to respond to the families’ need in the middle of the night," Hautaniemi said.