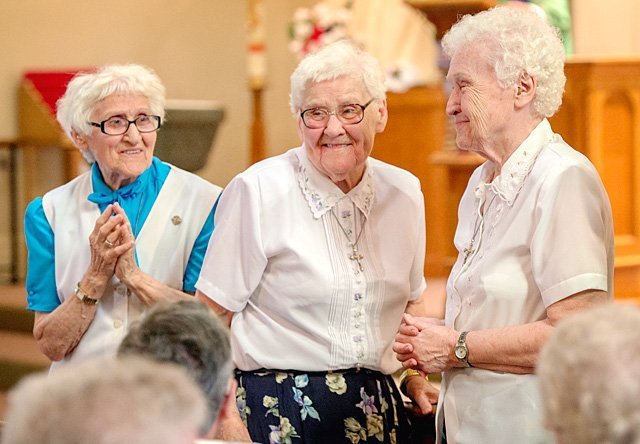 From left, Sister Dorothy, Sister Blanche and Sister Florence stand to be honored during Mass at Holy Apostle Church before their farewell celebration, July 19. (Courier photo by Jeff Witherow)

“We pray that they will continue to be blessed with all good things; grant them good health in body, mind and spirit as they enjoy the days ahead,” prayed Father Mugavero during the July 19 Mass. “May these sisters know how grateful we are for all that they have done for us here…encouraging us all to really grow closer to the Lord.”

The three School Sisters of Notre Dame, who also are biological sisters, received applause from hundreds of parishioners as they bade them farewell. The Leising family also includes two brothers who served as priests and a nephew who is a priest currently serving in Alaska. Fathers William and Edmund Leising, who are deceased, served overseas.

“That is one powerhouse family,” Father Mugavero remarked.

Sister Dorothy Mary, 91, has worked at the parish for more than 25 years, he noted. Sister Blanche, 89, worked alongside her for most of those years. The two will now join their sister, Sister Florence, at a retirement community in Connecticut.

Sister Blanche said their parents provided the family with a wonderful example of living their faith.

“They were very prayerful,” she said. “The church meant a lot to them in their lives.”

In addition to visiting the sick, the two sisters created a food ministry where they collected food and delivered it to neighborhood families in need, Sister Blanche explained.

That parish work proved very rewarding for them, said Sister Dorothy Mary, who also had been a teacher for 45 years.

“I just loved what I did,” she said, especially serving parishioners or their family members who were ill. “They were so happy to receive the Lord. It was such a joy to be with them.”

Mary Spaziano, who has been a Holy Apostles parishioner for 77 years, said she will always be grateful for the time Sister Dorothy Mary came to visit an ailing relative as part of her ministry to the sick.

“We are very grateful,” she said. “They were very loving and dedicated to the church. I loved them both. I’m very much sad to see them go.”

She began going to the store herself and bringing food to those that she knew needed it. But she didn’t have the resources to keep doing that, she explained.

“I said to myself, ‘How can I help these people?’” she said.

So, she went to Wegmans with a bulletin and asked if they would donate day-old bread, which they did and continue to do, she said. Every Thursday, a few volunteers help her collect the bread, sort it and deliver it house to house, Sister Dorothy Mary said.

Father Mugavero will continue the work she began several years ago.

“No matter how busy they were, they always found time to help the next needy person,” said parishioner Lena DelMonache.

Bruni Martínez, the parish’s urban-ministry coordinator and choir member for the Spanish Mass, said the women were not only attentive to the Latino community but were warm, friendly and sincere.

“She is ageless,” she said of Sister Dorothy Mary. “She was a good role model for all families.”

Sister Dorothy Mary said she was impressed as well by the faith of the parishioners at Holy Apostles.

“They supported everything we did,” she said.

The Leising sisters served as “good shepherds” of the Holy Apostles community, Father Mugavero said in his homily.

“So many times, they have shepherded us to those restful waters we so needed; given us guidance when we did not know which way to turn; and given us courage, strength and healing by anointing us with their presence when we needed them the most,” he said. “Like good shepherds, they have called us by name and have led us closer to the Lord … through prayer, by doing countless acts of service, by challenging us, by encouraging us, by loving us and by always being present to us.”