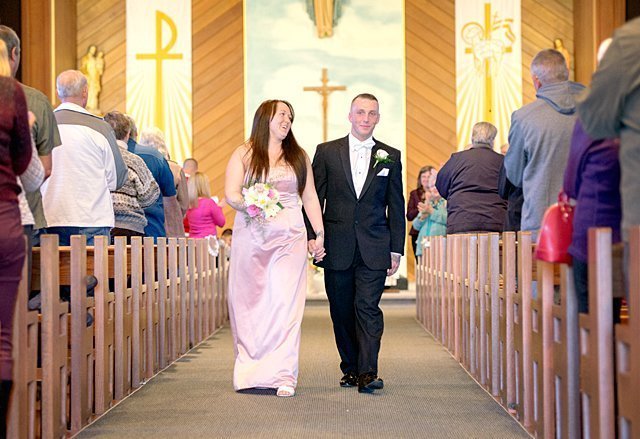 Priscilla and Joe Banker walk down the aisle at St. Mary Church in Honeoye April 24 after exchanging wedding vows during the parish's regularly scheduled Sunday-morning Mass.

HONEOYE — Even before Pope Francis released a key document on marriage and family life March 19, St. Mary Parish was already putting its principles into action.

In his apostolic exhortation Amoris Laetitia — written as a follow-up to the 2014 and 2015 Synods of Bishops on the Family — the pontiff implored Catholics to embrace, not exclude, people living in what he termed "irregular" circumstances.

"These couples need to be welcomed and guided patiently and discreetly," the pope stated in No. 294 of the document. Through such guidance, he explained, opportunities for the couples can arise "that can lead to the full reality of marriage and family in conformity with the Gospel."

It was indeed a spirit of welcoming by St. Mary staff members and parishioners that encouraged an unmarried couple — along with their two young children — to become initiated into the Catholic Church during the Easter Vigil March 26. Then, four weekends later, Joe and Priscilla Banker exchanged wedding vows during the Honeoye church’s regularly scheduled 8:30 a.m. Sunday Mass.

The new husband and wife said they’ve been grateful for steady encouragement from this western Ontario County parish.

"It’s hard to believe that it happened the way it did. So much has happened, and I’m so thankful for everybody," Priscilla said as she held her baby son, Peyton, during the couple’s wedding reception in the church hall following the April 24 Mass. 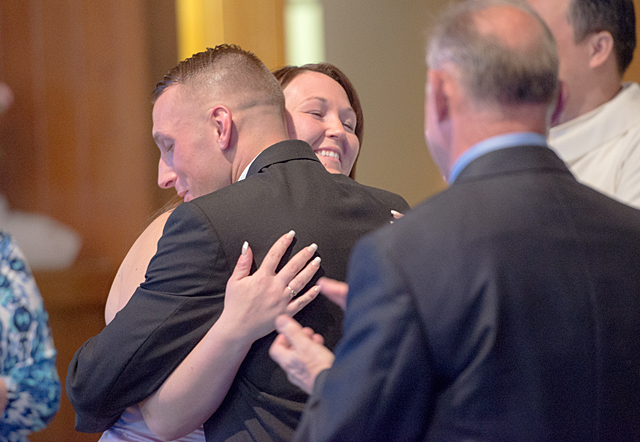 Fewer than five months earlier, however, she and Joe were facing a potential tragedy. When Peyton was born last Dec. 6, his kidneys were not functioning properly, and there was a chance he wouldn’t survive.

"I was just really angry, to be honest, wondering why is this happening to us," Joe recalled.

Yet during that same period, Joe found himself embracing his spirituality in ways he never had.

"I don’t know what it was. I just started praying every minute, every hour," said Joe, who was born into a Catholic family but hadn’t received any sacraments.

He located St. Mary Church near his Honeoye residence, and one December Wednesday walked into a weekday Mass being celebrated by Father Hoan Dinh, whom he had never met. Father Dinh, pastor for the cluster of St. Mary and St. Matthew in Livonia, spent 30 minutes with the tearful young man after Mass and subsequently visited Strong Memorial Hospital, where the baby later made a successful recovery.

"Father Hoan really went out of his way in the beginning," Priscilla said.

During this period, Joe continued praying fervently, often holding a rosary his uncle had once given him. Meanwhile, he and the couple’s other child, 5-year-old Chloe, started attending Mass at St. Mary, where Chloe became involved in Children’s Liturgy of the Word. Patricia Rodman, the cluster’s faith-formation coordinator, began providing catechesis for Joe and, from that point, he and Priscilla — who had been baptized Methodist — decided to enter the Rite of Christian Initiation of Adults process and Priscilla began attending St. Mary as well.

Joe, Chloe and Peyton were baptized during the Easter Vigil Mass at St. Matthew. Also that night, Priscilla and Joe — who are both 26 years old and have been together for eight years — received first Eucharist and were confirmed. Only one sacrament remained for them to complete as a pair.

Although the Catholic Church permits weddings during Sunday Masses, they rarely occur then because the couple’s guests would be significantly outnumbered by the regular congregation. In the Bankers’ case, however, "this is their family," Rodman said, describing the couple’s regard for the community at St. Mary. In fact, the entire wedding reception was funded by the parish, and many parishioners crammed into the hall to help Joe, Priscilla and their kids celebrate on April 24.

The Bankers expressed their appreciation through a May 1 bulletin notice, stating, "We are so happy and shocked how much you all have put into our celebration of marriage. … We have never felt so loved by so many people we don’t even know. We are so blessed to have you all in our lives now."

Both Rodman and Father Dinh noted that no one at St. Mary ever passed judgment on the Bankers, even though they had been living together and had two children without benefit of marriage. As Pope Francis stated in No. 305 of his apostolic exhortation, "A pastor cannot feel that it is enough simply to apply moral laws to those living in ‘irregular’ situations, as if they were stones to throw at people’s lives," warning that to do so would be the action of one with a "closed heart."

Rather, Father Dinh described his approach with the Bankers as "meeting people along the way."

"It’s an opportunity for evangelization and catechesis," he said. "I have found and trust that God was leading them to this point."

"Our God is a God of love," Rodman agreed. "Who do you think pulled (Joe) into the church that Wednesday morning (in December 2015)? That was God."