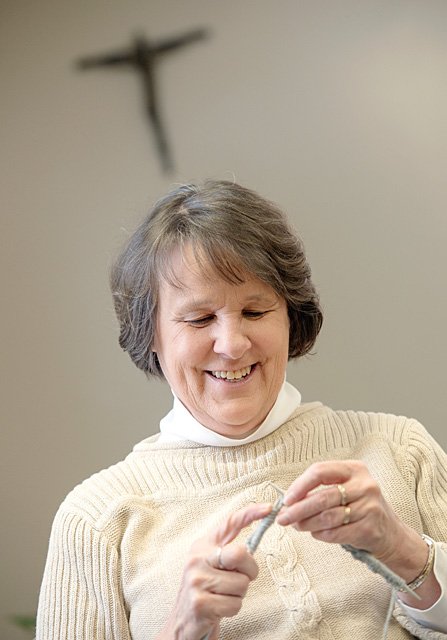 BRIGHTON — When one thinks of Uganda, the need for warm, knit caps doesn’t stand out.

But for newborn babies, those caps could mean the difference between life and death.

Kirsti Shields discovered this when she connected with a Dutch nonprofit organization, Hope Alive Uganda, about three years ago when it was building a maternity clinic in a village in the East Africa country. As she learned more about the needs of the mothers and babies there, she also heard of a local organization called Journeys of Solutions. That group of former Eastman Kodak Co. executives formed as a way for people who have traveled around the world to give back to some of those countries.

The local organization helped Shields with raising awareness of Uganda’s needs and her project to collect donations and deliver them to the village on a 10-day trip that began March 24.

Those donations included more than 150 knit caps created by a knitting group from Our Lady Queen of Peace Church. Her goal had been to collect 100 caps, Shields said.

"These ladies have just done the most amazing job," she said. "I hope they know what a great gift they are giving to the people of the village in doing this."

She first spoke with Beth Watkins from Queen of Peace after placing a notice on Craigslist and subsequently met with the group at the church and told them of her project.

The group jumped right in and had made 70 caps before even meeting with Shields on Jan. 20, the women of the group explained during a March 3 gathering at the parish center. Watkins noted that the group continued knitting the caps as a Lenten service project.

During the March 3 knitting session, group members sat in a semicircle with needles in hand as they worked and talked of Shields’ project. On a conference table in the room, Watkins also laid out a rainbow of caps members had created.

The group of nine women have been knitting together weekly for about eight years, Watkins said. Originally, the church had evening and morning knitting groups to accommodate anyone who wanted to take part, she added, noting that a few members also have been encouraging a sister group to form at St. Thomas More Church. Along with creating the caps for the Ugandan village, the Queen of Peace group also creates hats, scarves and mittens for such local groups as St. Mary’s Place and St. Joseph’s House of Hospitality, said member Linda Kusak. One woman even knits blankets. Most of the yarn the group uses is donated, Watkins said.

"It’s something we enjoy doing together," Watkins added, noting that members are helping others in the process.

After Shields’ visit, the group decided to knit as many caps as possible before she traveled to Uganda, Watkins noted.

Shields said the need for the caps stems from the challenges pregnant women in the Ugandan village face: malnourishment, lack of access to prenatal care and exposure to such diseases as malaria and tuberculosis.

"The babies are more vulnerable when born … and need that little extra support (from the caps’ warmth)," Shields said. "Their odds were greatly improved when the babies had access to those. Such a simple thing. (Clinic) staff found with these vulnerable infants, the caps really helped just stabilizing (them) in those early few days."

In addition to the caps, Shields said she also had planned to deliver suitcases full of medical supplies donated by InterVol, another Rochester nonprofit organization, to the maternity clinic in Kameke. The clinic recently moved 10 miles from its original site in Kisozi and lost some of its supplies, she said.

Improving prenatal care and the skills of clinic staff also are goals of the Dutch organization to help women avoid the need to go to the hospital, which is about 26 miles away, explained Shields, who is an England native.

"A lot of women died before they got to the hospital," she said.

Most women deliver their babies at home, though, so Shields also will give some of the caps to the village midwives who help with labor and delivery. Shields said she also helped raise money to buy bikes to transport women when necessary to the clinic or to the hospital.

"There are a lot of things we take for granted," Watkins said.

Since the villages have no running water or electricity, such basic donations as caps, soap, gloves and masks make a huge impact, Shields noted.

"Conditions are absolutely not ideal yet, and there a lot of things where we would not want them to be in the U.S.," she said. "But they’re definitely moving in the right direction."

EDITOR’S NOTE: To join the knitting group, call the parish office at 585-244-3010. For more information about Hope Alive Uganda, visit http://hopealiveuganda.org. To learn more about Journeys of Solutions, visit www.journeysofsolutions.com.