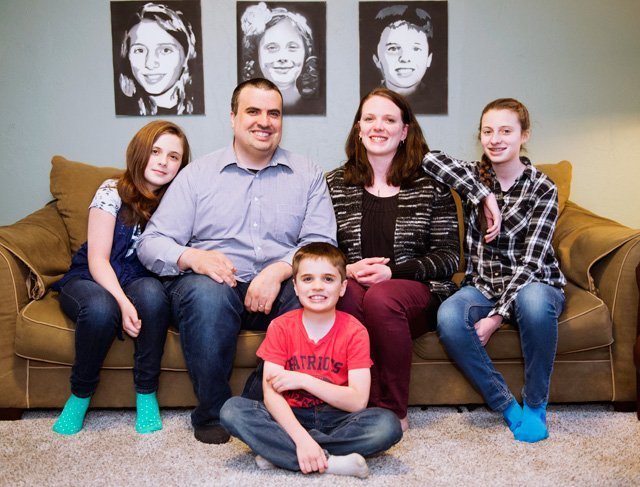 Bringing three children to church each week is no easy task, yet it’s one that Jonathan and Sarah Herendeen committed themselves to a long time ago. Each Sunday like clockwork, the Herendeens bring their three children, ages 13, 11 and 8, to Mass in the morning and faith-formation classes in the evening.

The Herendeens’ involvement with their parish, St. Peter in Clifton Springs, Phelps and Shortsville, doesn’t end there, however. Jonathan Herendeen sits on the parish’s pastoral council, Sarah Herendeen volunteers in faith-formation classes and their children are altar servers. The entire family frequently participates in parish fundraisers, social events and other functions as well.

Their efforts were recognized in January when the parish’s Knights of Columbus Bishop Hogan Council 13194 selected the Herendeens as St. Peter Parish’s Family of the Year.

"I was kind of excited. It was neat that the effort it takes to get the family to church was acknowledged by the rest of the church," Sarah Herendeen told the Catholic Courier.

The Knights began seeking nominations for the Family of the Year in September, according to Mark Cazer, financial secretary of the Bishop Hogan council. The Knights are a family-focused organization, and the national council encourages local councils to promote family values by honoring families who are dedicated to the church and their parish communities, he said. Thus, last fall the members of the Bishop Hogan council placed announcements in the parish bulletin asking parishioners to nominate families who were active within, committed to and supportive of the broader parish family.

All of the families who were nominated are exceptional Catholic families, but the Herendeens stood out in part because they were nominated by three different parishioners, Cazer said. A number of the parish’s Knights surprised the Herendeens by showing up at Mass one Sunday in early January and presenting them with a plaque and a family Bible.

"We had no idea. They caught us off guard because I thought there are other families that are just as deserving, and sometimes I think even more so," Jonathan Herendeen remarked.

At least three parishioners felt otherwise, however, and those nominations should serve as a strong affirmation of the Herendeens’ efforts, Cazer said.

"It lets people know that other people are noticing, because it is an effort to get a big family to church every week," he said.

Not only is it an effort to physically bring children to church each week, but getting them to sit still, listen, behave and actively participate in the Mass also can be a tall order, Jonathan Herendeen noted. Nonetheless, both he and his wife are firmly committed to those tasks.

"I just love the Lord with all my heart and I want my children to see the joy the church brings and how much God loves them," Sarah Herendeen explained. "I just feel it’s very important for kids to see their parents being involved and active. They learn by example. That’s why I try hard to get them there."

Jonathan and Sarah Herendeen themselves have good role models in Jonathan’s parents, Roger and Rosemary Herendeen, who typically attend Mass with the younger Herendeens. The elder Herendeens always stressed to their son the importance of attending Mass, Jonathan Herendeen said, noting that now he and his wife are following in their footsteps. These efforts are especially important today, when there seem to be fewer children attending Mass and celebrating the sacraments, he said.

"When I was a kid my first Communion class had probably a couple dozen kids in it, and now we’re lucky if there’s half a dozen kids," Jonathan Herendeen said. "We’re trying to keep the kids in the church, keep them involved, keep them active."

The Herendeens don’t expect accolades for their efforts, yet Sarah Herendeen does think the Family of the Year recognition is a valuable tool for the parish.

Parishioners seem to agree and were very supportive of the Bishop Hogan council’s first Family of the Year contest, Cazer remarked.

"We love to promote good family values, so I’m sure we’ll do it again," he added.