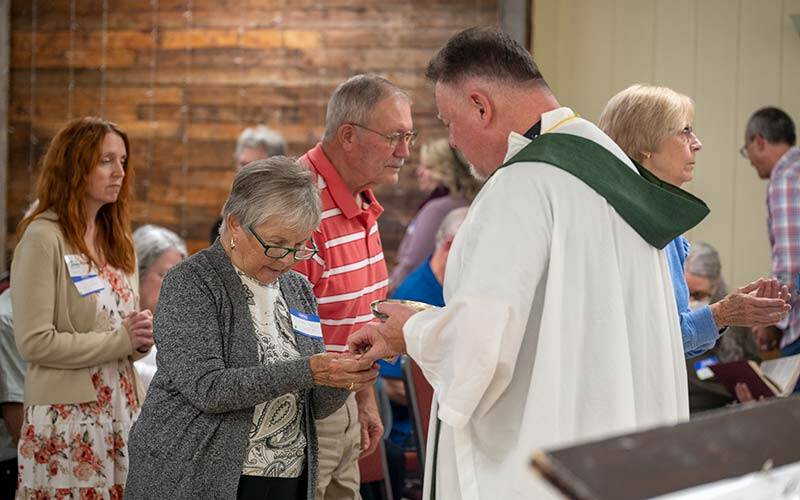 CALEDONIA — It wasn’t a centennial or sesquicentennial, nor a golden or even silver jubilee.

A large portion of spacious Jones Hall was filled for a five-year anniversary — one that, despite its comparatively short time frame, carried significant meaning for those involved.

The Sept. 24 event noted the formation in 2017 of St. Martin de Porres Parish, which comprises St. Columba Church in Caledonia; St. Vincent de Paul in Churchville; and St. Mary of the Assumption in Scottsville.

Michael Miller, chair of the St. Martin de Porres parish council, noted that the gathering acknowledged many collaborative steps all three churches have taken over the past five years.

“We have so become one parish, that we wanted to celebrate that,” he remarked.

All member churches of St. Martin de Porres have lengthy histories, serving as the longtime hubs for Catholic activity in their respective villages. The oldest is St. Mary of the Assumption, which was established in 1848. St. Vincent de Paul was founded in 1869 and St. Columba in 1885.

Formal affiliation between the three churches, located in southwest Monroe County and northwest Livingston County, began in 2011. That’s when they became clustered, being served by a single pastor.

In 2017 — based on a decree by Bishop Salvatore R. Matano — the cluster became a parish, combining all staff members, finances, councils and committees from St. Columba, St. Vincent de Paul and St. Mary. Although each church building has retained its original name, the churches’ single-parish designation brought the new name of St. Martin de Porres.

The title pays honor to a Peruvian Dominican lay brother (1579-1639) who was renowned for his work with the sick, poor and orphaned as well as his emphasis on social justice. St. Martin de Porres was canonized in 1962 by Pope John XXIII.

Largely due to the declining availability of priests, combining parishes has become a more common practice around the Diocese of Rochester — as well as many other dioceses in the United States — in recent decades. Father Hayes acknowledged that such mergers have not always gone smoothly in his experience, yet he said the cooperative spirit of the faithful at St. Martin de Porres has been exemplary.

“One of the reason it works is that people realize we worship the same God, the same Jesus, at St. Columba, St. Mary and St. Vincent,” remarked Father Hayes, who has served St. Martin de Porres throughout its short history after beginning as pastor of the three churches in 2014. “The buildings have not closed, so nobody has to be threatened by this. It’s been very rare that I’ve gotten any pushback at all.”

“You never know how it’s going to come together, but it’s blended very well,” Miller agreed. While noting that each of the three St. Martin de Porres churches maintains its own defining characteristics, “It’s a total community,” he stated.

In his Sept. 18 bulletin column, Father Hayes noted several ways that St. Martin de Porres parishioners have come together, such as attending each other’s churches more frequently; forming new friendships with people from those churches; and stepping into new roles as needed. Thus, he wrote, having a five-year celebration seemed quite fitting.

“In the great scheme of things, no, five years may not seem like a very long time, but nevertheless it is a milestone of us as a family, and families need to celebrate even the simplest of milestones,” Father Hayes wrote.

Tags: Livingston County News, Monroe County West
Copyright © 2022 Catholic Courier, Inc. All rights reserved. Linking is encouraged, but republishing or redistributing, including by framing or similar means, without the publisher's prior written permission is prohibited.