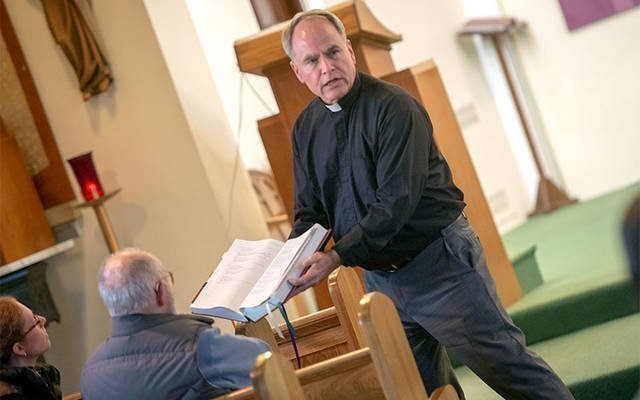 Looking for a profound spiritual boost between now and Holy Week? Consider attending one of several parish Lenten missions taking place across the Diocese of Rochester.

“They’re the very nature of Lent,” Bishop Emeritus Matthew H. Clark said, adding that missions are ideal during this Lenten season “when we prepare our minds, hearts, spirits and souls, all that we are, for a new life at Easter.”

Parish missions — also referred to as parish retreats — typically are multi-day events held at a church or group of churches and consist of talks by a guest speaker or speakers on a variety of spiritual themes. These events also may include prayer, music and the sacrament of reconciliation.

According to Patricia Scouten, missions offer an opportunity for deep reflection that can’t always be realized during a Sunday Mass alone.

“After a homily, sometimes I find that I want more. I think that when you go to a mission, you get more. That’s when you can go beyond Scripture, into the depths. I feel uplifted, renewed,” said Scouten, who serves as planning chair of a mission set for March 31-April 2 at Rochester’s Holy Cross Church.

Although a mission can take place at any time of year, the most popular period is Lent. Bishop Clark is scheduled to lead two missions in the upcoming weeks: March 24-26 at St. Maximilian Kolbe Parish in Wayne County, and March 31-April 2 in three northern Tompkins County parishes.

Other diocesan clergy involved in leading parish missions this year include Father Robert Kennedy, March 31-April 2 at Holy Cross; and Father George Heyman and Father Ed Palumbos along with Mercy Sister Kathleen Wayne, March 31-April 3 in the Monroe County West Deanery. Meanwhile, missions taking place March 10-12 at St. Mary of the Lake Church in Watkins Glen and March 10-11 at Ithaca’s Immaculate Conception Church will be led by staff members from Canandaigua’s Notre Dame Retreat House. Speakers for local missions/retreats also can come from much farther away: a retreat April 1-3 for parishes in the Pittsford/Mendon area will feature Father Bill Jarema from the Mercy Center in Colorado Springs; and a pre-Lenten mission March 3-5 at Fairport’s Assumption and St. John of Rochester parishes was due to be led by Father Brendan Moss, OSB, from Conception Seminary College in Missouri.

Bishop Clark said that when he leads missions, he works with parishes ahead of time on developing a theme so as to give them “an experience that will accomplish what they’re looking for,” he said. For instance, he will speak on building a personal relationship with Christ during his March 24-26 mission and on discipleship March 31-April 2. Other themes at upcoming missions in the diocese include reconciliation, the Lenten journey and the beatitudes.

Bishop Clark said that all parish missions and retreats should have their own distinct flavor.

“If you went to 50 retreats in our diocese, you’d have 50 different experiences,” he remarked.

Bishop Clark said he keeps his missions unique by approaching each session with a series of thoughts, rather than written text — “It works best when I don’t even look at the notes too much” — and allowing for audience participation such as question-and-answer sessions.

Despite these variations, Bishop Clark said the chief purpose of each parish mission remains the same: to provide an intense and potentially transforming spiritual experience.

“They’re very graced times, very privileged times for me, in encouraging people’s search for conversion and a closer relationship with Christ,” he remarked. “I love to do these (missions). I know it to be true, in my own case, that you get a lot more out of them than you give.”

Scouten observed that while attendance at an entire parish mission is not required, a single session can prove so invigorating that “then you’re looking forward to the next night.” The effect of parish missions are often immediately visible to Scouten, who said she has frequently witnessed intense discussion during the refreshment period following a mission presentation.

“A lot of people make comments like, ‘That’s given me a lot think about,’” she said.

Scouten said that missions, while open to the general public, provide a special sense of renewal for parish communities — or, in the case of the upcoming mission at Holy Cross, a group of parishes. This will mark the fourth straight year that the Eastern Greece/Charlotte pastoral-planning group has collaborated on a Lenten mission. In addition to Holy Cross this year, missions were held in 2016 at St. Charles Borromeo, in 2017 at Our Mother of Sorrows and in 2018 at St. John the Evangelist.

“People from our four churches enjoy seeing the other churches,” said Scouten, who also is the funeral minister at St. Charles Borromeo. “There’s a lot of networking going on for each session.”