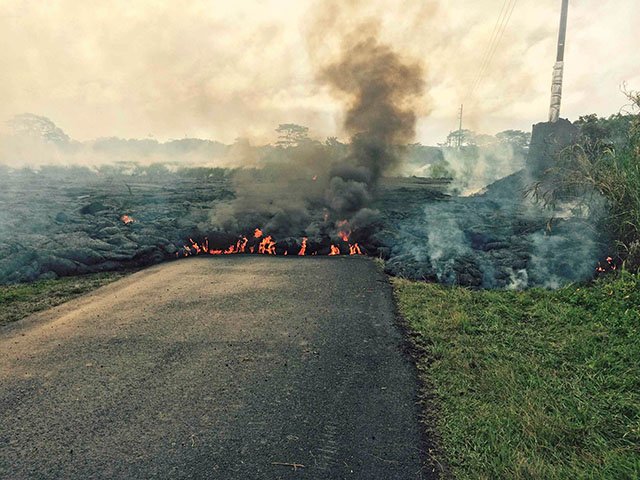 The lava flow from the Kilauea Volcano is seen crossing Apa'a Street/Cemetery Road in this U.S. Geological Survey image taken Oct. 25 near the village of Pahoa, Hawaii. The lava began flowing from the volcano June 27, threatening about 4,000 people who live in communities in the lava's path.

HONOLULU (CNS) — As a river of molten rock sits poised to intrude on the sleepy rural town of Pahoa on the island of Hawaii, or the Big Island, it is bringing members of Sacred Heart Parish closer together, even as it threatens to divide them permanently.

Besides the dramatic and tragic loss of homes and livelihoods, another major effect of a lava flow is the separation and isolation of communities as major roads are covered over and made impassable. When this occurs, residents will be denied ready access to jobs, medical care and other services, schools, retail establishments — and church.

As of Nov. 3, none of this had happened yet. Any major disaster continues to remain "imminent."

The flow, unpredictable and capricious, after traveling nearly 13.5 miles and more than 125 days, has stalled just yards from a major road and residential homes. However, breakout flows farther back indicate the lava is still coming.

The present flow began June 27 from the Puu Oo vent of Kilauea Crater, which has been erupting nonstop for 31 years. The 2,100-degree liquid rock, when moving, averages 5 to 10 yards an hour.

So she knows the finality of a lava flow.

"There is a lot of uncertainty for sure and that is the biggest worry," Walker said of the present threat. "So far it’s stressful and worrisome. But we are in it together."

The parish has been trying to allay that anxiety by bringing people together to assess and face the situation.

With the help of the Honolulu diocesan Office for Social Ministry, the parish has hosted a couple of town hall "disaster preparedness" meetings in the past month, each attended by about 100 people.

According to Walker, the parish has been identifying vulnerable parishioners, where they live, what kind of help they need and who is available to provide it.

"We put up maps along the wall and asked all the parishioners and to pinpoint where they live," she told the Hawaii Catholic Herald, Honolulu’s diocesan newspaper.

This is a "sizable parish," she said, with many subdivisions. By way of comparison, the expanse covered by Sacred Heart Parish is about half the size of the island of Oahu. Pahoa is the main town of the Big Island’s Puna district, most of which is served by Sacred Heart.

Walker said the parish has about 600 registered families.

HOPE Services Hawaii, a nonprofit agency of the Diocese of Honolulu based in Hilo, has already reached out to all residents in Pahoa and surrounding subdivisions.

The organization had joined other aid groups in going door to door looking for Pahoa’s disabled and elderly residents before the lava threat became imminent. Earlier it had sought out vulnerable Puna residents after Tropical Storm Iselle ravaged the east side of the Big Island in August.

This one-on-one outreach "has been most effective" finding those most in need and keeping them informed, said HOPE Services’ chief executive officer, Brandee Menino.

Marc Palmerleau, a member of the Sacred Heart parish council who has lived in Pahoa for nine years, is one on a parish team assisting parishioners.

"We have identified a list of about three dozen (households) with special health and other needs," he said.

As of Oct. 28, the parish also had a list of 15 parishioner homes on evacuation alert, which meant they were "packed up and ready to go," Walker said.

Some of the people have places to go, she said. Others do not and may have to stay in temporary shelters.

According to Palmerleau, besides housing, a big need for those temporarily displaced is storage space for possessions and animals. Others needed help connecting with government and private social services.

The Puna area is home to "lots and lots of floral businesses, anthurium farms, orchid farms," he said. "People are not only going to lose their homes, but their livelihoods."

"People are just helping one another, being encouraging and supportive," he said, "trying to make life as normal as possible."

The residents’ long-term fear, Palmerleau said, is "to be cut off" from their jobs when the flow crosses vital roads. A lot of people work in Hilo and in Kona requiring a commute that can already take several hours, he said. A worst-case scenario could double that time.

"And then the parish itself will be cut in half," he said, "and it will be much more difficult for a lot of families."

Walker estimates a split parish would lose about 60 percent of parishioners who live north of the flow.

"Right now everybody is still coming to church," Palmerleau said. "We are one big ‘ohana’ (family) and they are just going to keep coming."

If anything, more people attend Mass now, he said, with the Saturday 5 p.m. Mass "particularly crowded."

Palmerleau predicts parishioners will tolerate contingency detours now being prepared even though they will add eight miles to a drive to Sunday Mass. But if those paths also are disabled, the remaining circuitous 76-mile route would be too much.

As of Nov. 3, the lava had stopped about 160 yards from Pahoa Village Road, and a half mile from Highway 130, the main access to Hilo, the island’s main town, for the 8,200 residents of lower Puna.

When it crosses that road and into a residential neighborhood, "people will then be losing their homes," Palmerleau said.

Sacred Heart Church sits on Pahoa Village Road about a mile south of the flow on higher land. "We are not concerned" about the parish property, Palmerleau said.

The flow is expected to go on for months, if not years. But its consequences, in human terms, are forever.

"Lava is so final," Walker said. "There is nothing beautiful about it."

"It is not like a hurricane," she said, after which "a tree can grow back."

"When the lava comes and takes it all away, you have to start a new life," she said. "You cannot build on the lava."

Downes is editor of the Hawaii Catholic Herald, newspaper of the Diocese of Honolulu.