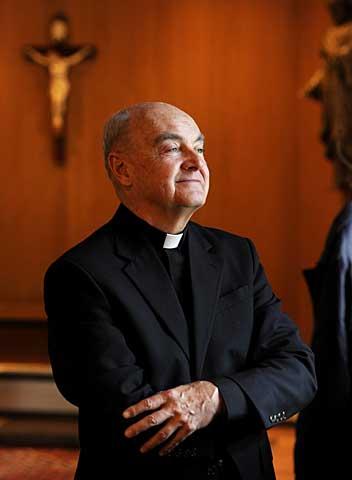 Father Thomas Nellis is a parish priest, and proud of it.

That line of ministry is how he’s spent the entire 44 years of his priesthood, including three pastorates spanning more than a quarter-century.

"(A parish) just always seemed the best place to be," said Father Nellis, who has served since 2004 as pastor of Holy Ghost Parish in Gates. "I like being rooted in the life of a particular community — presiding at the Eucharist, the variety of things that you’re involved in, all the people that you work with."

The 70-year-old priest is due to retire officially on June 29. His send-off will come in the form of a picnic with Holy Ghost parishioners on church grounds Sunday afternoon, June 13.

Father Nellis grew up in St. Andrew Parish in Rochester, attending the parish school before moving on to Aquinas Institute where his first inkling of a priestly vocation surfaced.

"Toward the end of high school I began to think about what I was going to do with my life. A few friends mentioned the priesthood; I was hesitant but figured, ‘What have I got to lose,’" Father Nellis recalled. He entered St. Andrew Seminary and "once I went there, it sort of felt right."

Father Nellis went on to attend St. Bernard’s Seminary, and also earned a master’s degree in liturgical theology from the University of Notre Dame. He was ordained June 4, 1966, by Bishop James E. Kearney at Sacred Heart Cathedral.

His first pastorate came at St. John the Evangelist, Clyde/St. Patrick, Savannah, where he served from 1983-92. He then was pastor for 11 years at Holy Trinity, Webster, before returning to Holy Ghost for his second assignment at that parish.

Father Nellis observed how the number of active diocesan priests has dipped over the course of his priesthood, as evidenced by the fact that Holy Ghost will enter into a cluster with two other Gates parishes, St. Helen and St. Jude, upon his retirement. Yet although "there’s fewer of us (priests), there’s more lay involvement, which certainly is very positive," he said.

In retirement, Father Nellis will reside at his cottage on Honeoye Lake during the warmer months while also performing sacramental duties as needed at diocesan parishes. He will spend his winters in Statesboro, Ga., with a good priest friend, Father Mike Smith.

"There’s been many ups and downs," Father Nellis said of his more than four decades of priestly service. "Probably at this stage of my life, I’m just grateful that the Lord has been with me through it all."