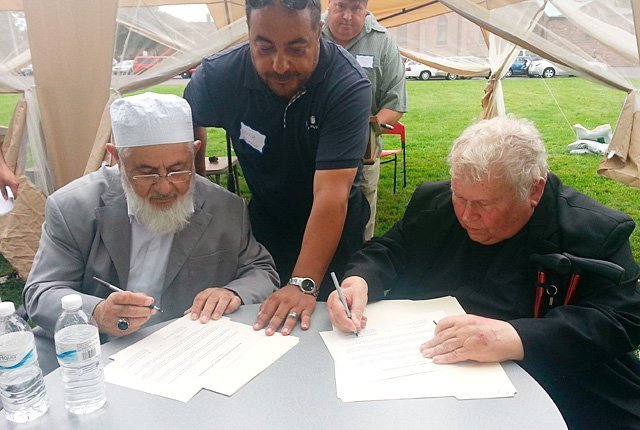 Imam Yusuf Yilmaz (left) and Father Thomas Wheeland, pastor of Holy Cross Church, sign the Charlotte Rochester Muslim-Roman Catholic Peace Park Accord during the May 30 dedication of the park, which is adjacent to the church and shared by both faith communities.

ROCHESTER — From sharing a parking lot to creating a little piece of serenity in a spirit of peace, the relationship between Holy Cross Church and the Masjid Al Sabur mosque next door has deepened in respect and friendship for nearly a decade.

The mosque moved to Charlotte section of Rochester in 2006, and soon after Imam Yusuf Yilmaz came to Holy Cross’ office for a visit, said Father Thomas Wheeland, pastor.

"Our community in Charlotte is a great community," Father Wheeland said. "We’re open to everybody."

In that vein, the church offered to share its parking lot as needed for the mosque’s community of 100 members, explained Joe DiVincenzo, a member of Holy Cross’ parish council. The two communities then shared meals together and began to get to know each other a little better, Father Wheeland noted.

About two years ago, the church and the mosque noticed an increase in "street people" trying to sleep in an area covered with brush in the north corner of the property, Father Wheeland said. While the church offers these people who come by a place to clean up and seek help if they so desire, he said that having people congregating outside wasn’t the ideal situation.

To alleviate any safety concerns, parishioner Derek Copenhagen took on the job of clearing the area as an Eagle Scout project. Now a student at Syracuse University, he cleaned up the brush, laid topsoil, and placed benches and other plantings to create a little park for all to enjoy.

"So the whole idea is finding people and trying to help them in a way that does not cause difficulty for others but in a way that’s positive," Father Wheeland said. "That’s what we do for each other, trying to find the strength we have and build on that. So, that’s what brings both (the Holy Cross and Masjid Al Sabur) communities together."

Earlier this summer, the two communities dedicated the area that Copenhagen had cleared as the Charlotte Rochester Muslim-Roman Catholic Peace Park.

Father Wheeland and Imam Yilmaz signed a dedication that reads in part: "We embrace peace, respect for all human life, forgiveness, mutual understanding, religious freedom to practice each person’s chosen faith tradition, constructive dialogue and respect for the ‘unalienable rights’ with which all humans are endowed by our Creator."

A plaque with the full dedication will be placed on the site, DiVincenzo said.

"The most important thing is respect," said Imam Yilmaz through interpreter Osman Yuksel during a June 25 interview at Holy Cross. "If everybody goes to respect each other, our world would be in a much, much better situation. Respecting each other’s faiths, respecting each other’s characters and everything like that. As you can see what’s going on in the world, us living in the Facebook period, we can see what’s going on in other parts of the world. So when people show respect, then love comes, everything else falls into spots one by one. Everybody has to learn to respect one another."

The imam added that there are evil people at work now misrepresenting what Islam is to the rest of world.

"But in reality they have other agendas. Therefore, making Islam look bad in front of the whole world," he added. "Real Islam is kindness, peace and tolerance. To kill a human being in Islam is like you killed the whole human race. It is how God is going to judge you. It’s very hard."

And what a different world it would be if more people followed in the footsteps of the two communities, concurred Imam Yilmaz and Father Wheeland.

"Whenever people ask us in relationship to you guys, we are saying you are very good people, share a lot of things with us … watching out for our needs as well," said Imam Yilmaz. "We are blessed to have Father Wheeland as a neighbor, and we are thanking God almighty for having a good neighbor."

DiVincenzo recently shared about the relationship between Holy Cross and the mosque at a gathering about the diocesan Muslim Catholic Agreement of Understanding and Cooperation, which was first signed in 2003. And several years ago, both communities attended a celebration of the agreement at Sacred Heart Cathedral at Father Wheeland’s invitation.

Having such a "grandiose plan" in place is beneficial, but the two communities have shown how it all comes down to being good neighbors, Father Wheeland said.

"Here is the real action of the plan: two people working together to share the faith that we’ve been given," he remarked. "How we worship may be different, but our faith is the same and that desire for the action of our faith. As they say and we say, in the love of one another."