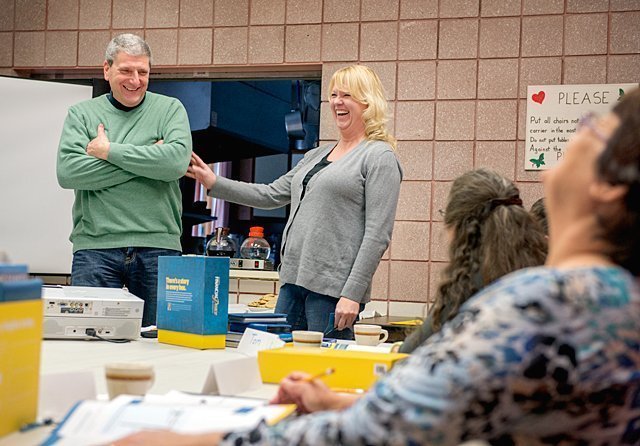 The words "financial" and "peace" are not often found next to each other, noted Mark Cazer, a member of St. Peter Parish in Shortsville, Phelps and Clifton Springs.

"Usually it’s ‘financial crisis’ and ‘financial disaster,’" Cazer recently mused. "The words ‘financial’ and ‘peace’ don’t seem to go together, but you really can have financial peace."

Cazer hopes to help his fellow parishioners find that financial peace through a nine-week class the parish’s Knights of Columbus council is sponsoring, aptly named Financial Peace University. Cazer and his wife, Bonnie, are the coordinators of the class, which follows a biblically based curriculum intended to change the way participants view and manage their money in order to become financially healthy. The program was developed by Dave Ramsey, who is the author of numerous books on financial topics and the host of a nationally syndicated talk-radio show on money matters.

Cazer first heard of Ramsey several years ago, when he began listening to "The Dave Ramsey Show" on the radio. After listening to Ramsey’s advice for listeners with financial questions, the Cazers decided to read his book, The Total Money Makeover: A Proven Plan for Financial Fitness. The couple was "doing OK" financially, but wanted to change both the way they managed their money and the way they communicated about their financial goals, Cazer said.

After reading his book, the Cazers followed one of Ramsey’s suggestions and began working together to develop a detailed budget for each month. That was three or four years ago, and the Cazers have been so pleased with the results that they still set monthly budgets, Cazer said. They include monthly expenses in the budget as well as one-time expenses they know are coming up, such as birthday gifts they need to purchase or holiday brunches they plan to attend.

Setting a budget and living in accordance with that budget doesn’t mean you can’t buy things, Cazer said.

"You can buy anything you want, as long as it’s written in the plan. If it is not written in the budget we do not buy it," he said. "Money in equals money out exactly. It forces you to plan for things."

Budgeting and following Ramsey’s advice not only improved the couple’s financial well-being, but it also improved their ability to communicate effectively and clearly about their financial goals, Cazer said. They have been so pleased with their results that they decided to try to bring Financial Peace University to St. Peter Parish. After the Knights of Columbus agreed to sponsor the course, the Cazers signed up to become course leaders. The Knights have sponsored the course for three years now, and offer a scholarship each year to one family that can’t afford the $100 course fee, Cazer said.

"That’s really a foundation for a lot of things. If you’re not living within your means, you’re going nowhere, and going into debt," he said.

Subsequent classes in the Financial Peace University program cover such topics as insurance, planning for retirement or college funds, real estate and mortgages. The Bible is the source for many of the perspectives and suggestions put forth in the course, Cazer said. He cited as an example Proverbs 22:7, which states, "The rich rule over the poor, and the borrower is the slave of the lender." This is why the course never encourages people to borrow money, but rather plan ahead and save up for the things they need in order to preserve their freedom, Cazer said.

The final class on charitable giving exposes course participants to a way of thinking about money that many of them have never considered before, Cazer said.

"God wants us to give not because God needs our money, but because God wants us to be changed by the way we spend our money. Giving to other people is really changing us," Cazer explained. "I think you can’t understand it until you get there. … Until you really start to do that giving, you don’t understand how it changes you and makes you a better person and gives you a different perspective."