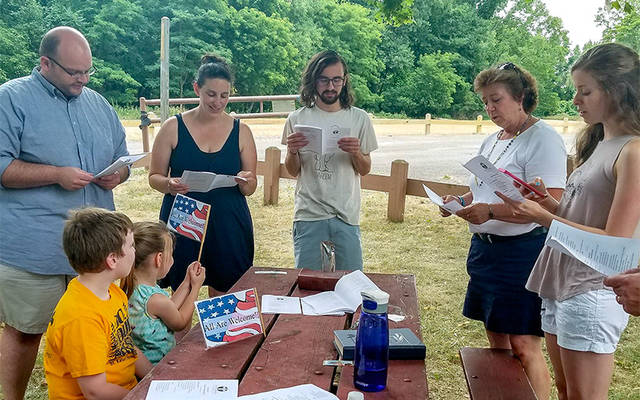 IRONDEQUOIT — Camp Eastman was full of activity in the early evening of July 13: children enjoying the splash park and playground; other folks playing volleyball; and a group attending a party in a lodge facility.

And, at one picnic table, several adults and children were gathered in prayer — a ritual that’s been repeated at outdoor venues all over Irondequoit this summer.

Since early July, participants have been meeting every Friday beginning at 6 p.m. to pray the Liturgy of the Hours and engage in social activity. Marge’s Lakeside Inn served as the site for the inaugural session July 6, followed by Camp Eastman, I-Square and the playground at Christ the King Church on the subsequent three Fridays.

Pop-Up Prayer Garden is a joint venture of St. Kateri Tekakwitha’s faith-formation staff. The twofold purpose of the get-togethers is to offer communal prayer as well as a mix of attractive venues for afterward, such as playground/park settings for children and families; a bar for adults; and food and entertainment at I-Square.

“That’s the idea, to have a chance to socialize,” said Mark Keller, coordinator of liturgy and adult faith formation at St. Kateri Tekakwitha.

“It’s an opportunity for people with different interests to come,” added Jessica Tette, the parish’s coordinator of children’s ministries.

Keller said he initially raised the idea of Pop-Up Prayer Garden to other parish staff members and was met with an enthusiastic response.

“I got to thinking, how can we get the church outside the building and into the community in an identifiable way, not as individual parishioners but as a group?” Keller said.

“I think it’s good to show that prayer can be integrated into everyday life,” Tette agreed.

The title of Pop-Up Prayer Garden was suggested by Tette, who based the name on Pop-Up Beer Gardens — various outdoor eating and drinking establishments during the warm-weather months in Philadelphia, where she resided from 2015-17.

In Irondequoit, Keller said that organizers sought out places where they would be plainly visible to the public, including large-crowd settings. Such was the case for the inaugural event at Marge’s Lakeside Inn on July 6, as approximately 15 people united for evening prayer near the entrance while bar-goers filed in during peak Happy Hour time. Prayer participants acknowledged that they got a couple of puzzled looks, but generally were met with acceptance. Keller said that the group strives to achieve the balance of encouraging strangers to join in if they appear interested, but not being pushy to the point of creating discomfort.

Keller also noted that Pop-Up Prayer Garden participants are under no obligation to engage in both its prayer and social aspects. For instance, he said that several folks joined the group at Marge’s following prayer because they couldn’t get there any sooner.

Keller said organizers are looking to extend Pop-Up Prayer Garden into the fall months, saying that “we’ll probably have a slight change of flavor” location-wise by moving indoors. Although this initiative has been attended chiefly by St. Kateri Tekakwitha members thus far, he said the events are open to all who are interested.

“The more people, the better,” Keller said, adding that folks from outside St. Kateri Tekakwitha might even become inspired to organize Pop-Up Prayer Gardens in their own parishes and communities.