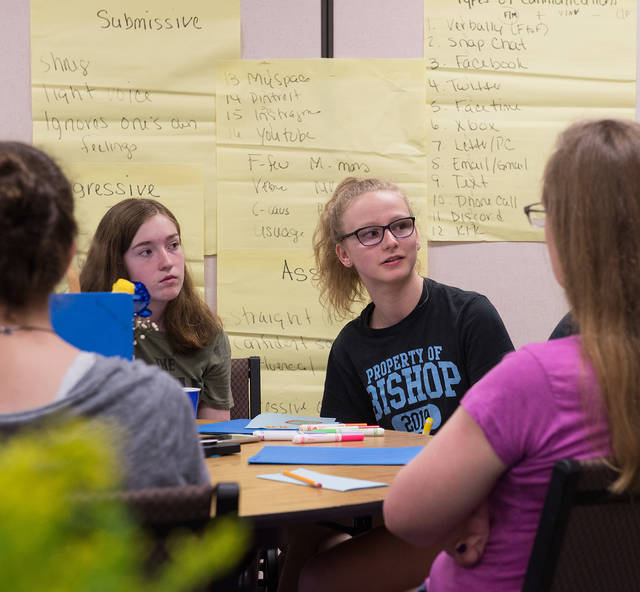 Julia McMahon answers a question about prayer June 28 during a FutureNow teen leadership training program at Holy Cross Church in the Charlotte section of Rochester. (Courier photo by John Haeger) 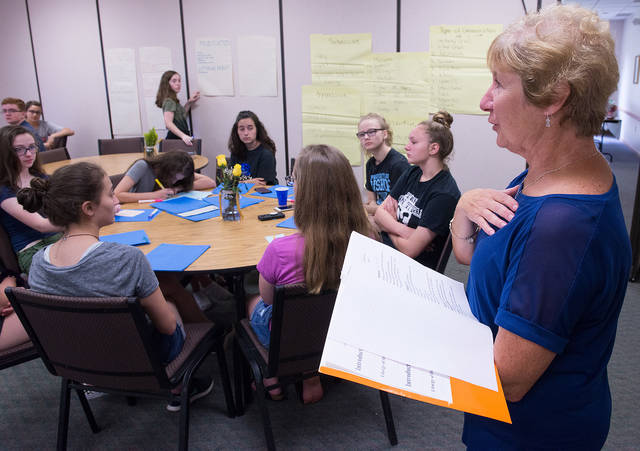 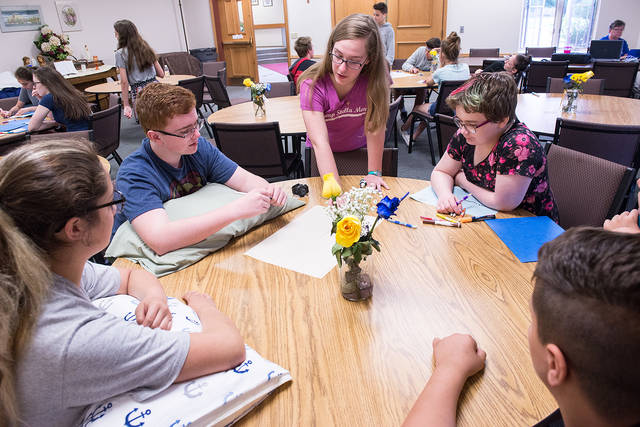 ROCHESTER — It hasn’t take long for Jenna Welch to implement the skills she’s learned through her FutureNow leadership training.

Jenna, a parishioner of St. Charles Borromeo in Greece, attended FutureNow in both 2016 and 2017 — and this year returned as an assistant staff member, guiding her own peers.

“I enjoyed my (previous) experience so much, I wanted to come back and help others have the same experience,” explained Jenna, 16, who is entering her junior year at Greece Olympia High School.

Her evolution from participant into leader exemplifies the intent of FutureNow — to guide teens toward stepping into leadership roles in their parishes and communities. The annual program was held June 27-28 at Holy Cross Church, located in the Charlotte section of Rochester. A total of 24 high-school students took part in group discussions and presentations by parish youth ministers as they worked on improving their skills in such areas as communication, leadership styles, program planning, and prayer and worship.

For instance, during a late-morning session on communication June 28, participants weighed how they might explain to a 6-year-old the experience of feeling God’s presence. According to organizers, enhancing such skills helps prepare teens to serve as religious-education and sacramental-preparation catechists at their parishes, whereas other aspects of FutureNow guide them toward serving in such areas as parish councils, liturgical ministry and youth ministry.

Donna Jacobi, youth minister at Holy Cross and coordinator of FutureNow, noted that the program is a two-year process, with the second year covering team building and decision-making, presentation skills, group dynamics, and spirituality and personal growth. Participants are encouraged to attend both years, she added.

The leadership talents developed can be applied not only to parish ministry, but all walks of life. Maggie Sak, for one, is weighing a career in physical therapy; she said her recent FutureNow training will help her in being more assertive while working with patients. Maggie also noted that she was called upon to address the entire group during the FutureNow sessions, which has in turn aided her public-speaking skills.

“I’m so afraid of giving my own speeches, but you feel comfortable,” she said of the atmosphere at FutureNow.

Maggie, who attends Holy Cross Parish, was a first-year participant, as was her sister, Ellie. “At first I was really nervous, but then we did some icebreakers and I got to know people,” said Maggie, who turned 16 on Aug. 4 and is entering her junior year at Our Lady of Mercy High School in Brighton.

In fact, teens had many opportunities to connect during their two-day experience. Following the first day of workshops, the group attended the regularly scheduled 5:20 p.m. Mass at Holy Cross and then went out for dinner and ice cream near Ontario Beach Park, a short distance from the church. Then it was back to Holy Cross for a sleepover, with most teens spreading out on sleeping bags on the parish-center floor — although Jacobi said, laughing, that some “have devised a way to put chairs together and make beds.”

FutureNow dates back to 1998, when it was instituted as a diocesan initiative. The program now operates as a combined effort of several parishes in western Monroe County, and has been held as a summer overnight event at Holy Cross since its early years. Participation is open to all diocesan parishes, with this year’s group coming from Holy Cross and St. Charles Borromeo, as well as St. Pius Tenth in Chili.

Jacobi noted that FutureNow’s core subject matter is the same as ever, but has been adapted for current times. She said, for example, that communication skills are now largely approached from the perspective of social-media usage, with a greater emphasis on written communication — as in texting — than verbal. In addition, during a June 28 session on prayer and worship, teens volunteered several ideas about using their smartphones to locate prayer resources.

One vital aspect of FutureNow that remains a constant is the camaraderie that takes place, Jacobi said.

“They have a good time and the kids really bond,” she remarked. “They’re good kids — a nice group of kids, all supporting each other.”

Tags: Monroe County West
Copyright © 2023 Rochester Catholic Press Association, Inc. All rights reserved. Linking is encouraged, but republishing or redistributing, including by framing or similar means, without the publisher's prior written permission is prohibited.