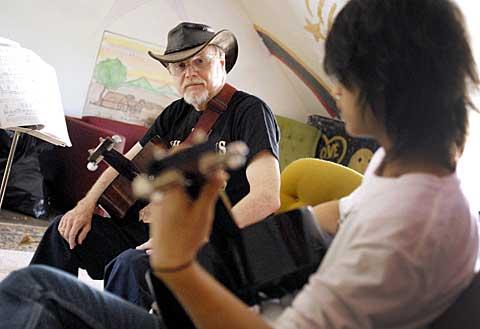 James “Sandy” Sandifer (left), a volunteer with the Mary’s Place refugee-outreach program operated by Rochester’s Cathedral Community, helps refugee Aung Nga learn to play country music on the guitar May 20 as a means of teaching English, geography and other topics.

Maintaining the vitality of Catholic communities has been a hot discussion topic around the diocese recently, amid ongoing reconfiguration and consolidation of parishes.

Karen Rinefierd, a diocesan pastoral-planning liaison, noted that healthy parishes do not limit activity to their four walls. Growing parishes work with other churches and individuals in need, she said.

"Very few parishes see themselves as a single entity anymore," Rinefierd observed. "They are seeing the positives of working with their neighbors."

"Pay attention to the cultural changes in your neighborhood as well," advised Deborah Housel, also a diocesan pastoral-planning liaison. "Is there a place for them?"

LaBue is the volunteer executive director of Mary’s Place, an 18-month-old refugee outreach ministry of the Cathedral Community in northwest Rochester. She is a parishioner of the Cathedral Community, which was formed through consolidation of Sacred Heart Cathedral, Holy Rosary and Most Precious Blood churches and ultimately resulted in the 2008 closing of all but the cathedral church.

LaBue, a retiree looking for a volunteer opportunity, said she was bothered by the sight of refugees wrapped in sheets and wearing flip flops on the streets of northwest Rochester in the middle of winter.

She and friends Sharon and Bill Swartz and Father John Loncle toured Saint’s Place, a refugee resource center in Pittsford, where they learned that more help was needed for local refugees. That need motivated the group to place an article in the Cathedral Community bulletin to solicit donations of winter coats and boots. With the help of Father Loncle, who was then the Cathedral Community’s parochial vicar, they readied three rooms in Holy Rosary’s rectory. They spread word about the ministry and waited for three weeks, but no refugees showed up.

"Then one morning our bushes were moving, and (many refugees) all came in," LaBue said. "They came in, in community."

Seventeen months after opening on Jan. 24, 2009, Mary’s Place occupies nearly the entire rectory at Holy Rosary. Each day it draws dozens of refugees, young and old, for tutoring, emergency food supplies, clothing, and counseling on financial, health and employment matters. Significant help for the ministry has come from such organizations as Lake Avenue Baptist Church and the Rochester Area Community Foundation. LaBue said she expects the ministry to serve up to 120 children in its summer program.

"What I like about (Mary’s Place) is it seems to be filling a very important need," said Father Kevin McKenna, pastor of the Cathedral Community.

Father McKenna noted that although evangelization was not a focus of Mary’s Place, it is a welcome side effect; some refugees from Burma and Africa are now attending Cathedral Community Masses.

New ministries and ventures likewise can help heal the hurt that may arise from parish closings, consolidations and clustering, Father McKenna observed.

"I think if you start working constructively and working towards outreach, you can bring people together," he said.

Bringing people together becomes all the more crucial as changes unsettle a range of parishes in Monroe County. The following changes will be taking place in the coming months:

The three parishes have shared staff members to prepare for clustering, Rinefierd said.

"It really makes a difference for a group of people working together across parishes to prepare for a transition," Rinefierd said.

New rounds of planning also are in the works for urban Rochester parishes, which were reorganized into new planning groups in November. Housel said the groups will be looking at ministries and parish coverage across the entire City of Rochester. The city has seen a string of parish closings in recent years, including five churches in 2008, one in 2007 and three in 2006.

"We will be addressing the blank spots because there has been so much merging and changing," Housel said.

In one Wayne County town, a closed church has been able to welcome a new ministry.

The former St. Gregory Church in Marion was used for weekend liturgies until June 2008 and for daily Mass until February 2009. The Diocese of Rochester now rents the building for ministry with the Hispanic community living in Wayne County, said Bernard Grizard, diocesan director of Parish Support Ministries, of which pastoral planning is a part.

The outreach to those who speak Spanish fits with the Catholic Church’s obligation and call to be welcoming to the strangers in its midst, he noted.

"We have the responsibility as a local church to give them the opportunity and chance to receive the sacraments," he said.

Back at Mary’s Place in northwest Rochester, language differences are something of a barrier, but volunteers are drawing on their own gifts to reach out to the strangers among them. James "Sandy" Sandifer of Greece, a self-described "Army brat" and a Georgia native, has been using country-western music to reach out to three teens from Burma: Aung Nga, Ah Dan and Francis Nay.

Originally assigned to tutor the teens in history, Sandifer learned that they enjoyed music, so he began to teach them how to sing and play on the guitar such songs as "Take Me Home, Country Roads."

Through the teens’ music, artwork and poems, they share the same message as the displaced Southerner: "Take Me Home."