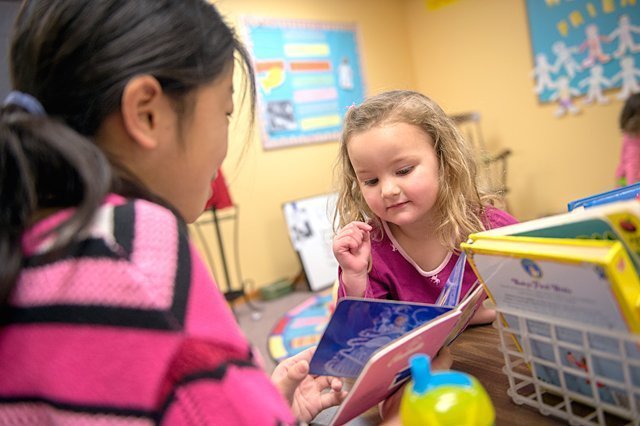 "Let the children come to me, and do not prevent them; for the kingdom of heaven belongs to such as these" (Mt 19:14).

Staff at most Catholic parishes agree that children are welcome in church, but they differ in the ways they encourage children to occupy their special places at the Lord’s table. School-age children at St. Joseph the Worker Parish in Clyde, Lyons and Savannah participate in monthly children’s Masses. St. Benedict Parish in Canandaigua and East Bloomfield offers a Sunday-morning faith-formation program for preschoolers and toddlers while their parents attend Mass. And St. Peter Parish in Shortsville, Phelps and Clifton Springs provides bags of religious activities and snacks for young children to use during liturgies.

At St. Joseph the Worker’s children’s Masses, youths serve as greeters, altar servers, ushers and lectors, and the parish’s children’s choir provides the music for the liturgy, according to Lisette Bricco, parish secretary. On the second Sunday of each month, these Masses are held at Clyde’s St. John the Evangelist Church, one of the parish’s three worship sites. The children who will be participating in the Mass usually gather the previous Thursday evening to practice reading, singing and serving in their various roles.

"They really love it, and I think it has definitely helped them understand things much more," Bricco said.

The parish hopes these Masses will help children become active and engaged participants in the Mass and encourage them to start thinking about ways they can continue their involvement as they get older, Bricco said. St. Joseph the Worker has been offering these Masses for nearly three years, but their popularity with adults and children alike has grown quite a bit in the last year or so, she noted. 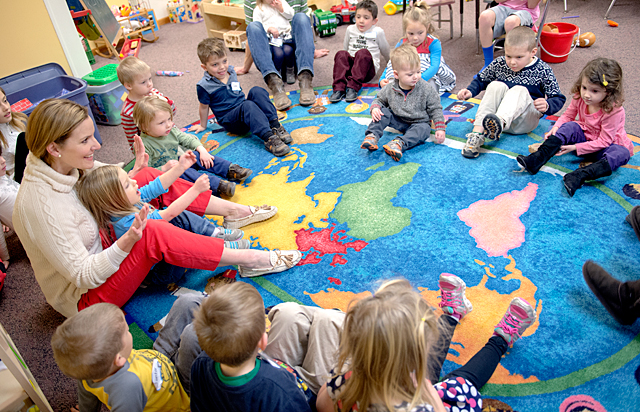 Emily Spinelli teaches a lesson to the prekindergarten faith-formation group during Mass March 20 at St. Mary Church in Canandaigua.

"We’ve had quite a turnout, and we’ve noticed the Mass numbers have gone up a little bit at that time because so many of the parishioners love to see the children do all these things," Bricco said.

The preschool faith-formation classes offered at St. Benedict Parish also have garnered praise from adults and children alike, noted Emily Spinelli, coordinator of the program. Parents drop off their children in the parish’s preschool room at St. Mary Church shortly before the 9 a.m. Mass begins each Sunday, and Spinelli and a team of adult and teen volunteers look after the children until Mass is over. The younger children have free play time while Spinelli, who is a former kindergarten teacher, presents a short lesson related to that weekend’s Scripture readings to the preschool-age children.

"Basically it’s an introduction to religious education. … It’s done through stories, music and crafts, all at the level of the children," Spinelli said of the program, which began last fall.

Typically, between 12 and 15 children ranging in age from 18 months to 5 years old attend the weekly classes, Spinelli said. The program originally was intended for 3- and 4-year-olds, but Spinelli soon realized many parents could use a safe place to bring their younger children to Mass. Several parents told Spinelli, who is a mother of three, that they stopped attending Mass at least temporarily when their children were very young.

"It’s hard to bring your little ones to church and get anything out of Mass. We don’t have a crying room," Spinelli explained. "What we’re doing is making an environment that is fun for them but they’re also learning, and it gives the parents the opportunity to pay attention."

St. Peter Parish hopes to provide a similar opportunity to parents through its Mass Time activity bags, according to Sherry Brown, the parish’s faith-formation and youth-ministry coordinator. As they enter the church, families with young children are welcome to grab these canvas bags, which are filled with crayons, markers, scrap paper, Bible-themed coloring books and activity pads, snacks, children’s missals and handmade rosaries. Each week Brown restocks the bags with items relevant to the weekend’s Scripture readings. For example, when the Gospel reading depicted the parable of the fig tree, Brown put small boxes of raisins in each bag, and on Palm Sunday she included "pint-sized palms" that she made out of construction paper.

Children love the bags, said parish secretary Andrea Record, whose own three grandchildren look forward to seeing what’s in the bags each week. And the bags lighten the load for already-frazzled parents of young children, who often lug bags packed full of snacks and other things to occupy their children during Mass, Brown added.

"I felt it would give the mothers and fathers one less thing to get ready to take to church and carry in," said Brown, who made the bags in January. "I was hoping that the parents would look in the bag as well to see what resources I might provide for them to take home to help them personally with their journey of faith. I try to catechize the parents through catechizing the youth."