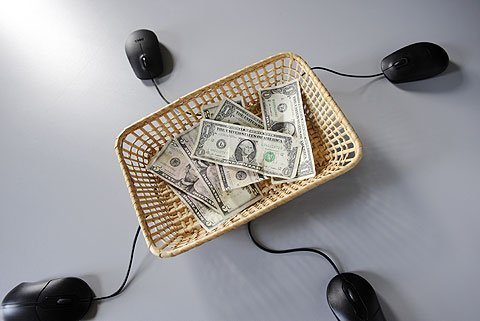 The bulletin blurbs announced that the Auburn parish was rolling out a new electronic-giving program designed to make it easier for parishioners to support St. Alphonsus financially. Parishioners who sign up simply fill out a form indicating how much money they’d like to contribute and how often they’d like those contributions to be made, explained Veronica Hill, bookkeeper at St. Alphonsus. Parishioners then provide Hill with information about their bank accounts, and she passes that information along to the parish’s bank, which then automatically withdraws those contributions from parishioners’ bank accounts at the times they’ve designated.

"You can have the funds withdrawn monthly, weekly or biweekly, whatever the parishioner chooses," Hill said. "It’s just the way of the future. It’s a simple and easy way for them to be giving to the parish and not have to remember to bring their envelope every week."

Several parishioners had been asking for an electronic-giving option for some time, she added. Although its electronic-giving program is new, St. Alphonsus is not the only Auburn parish to promote this alternative to the traditional paper envelopes and collection baskets.

The electronic-giving program is different than online giving, Guinnip noted. With the latter, contributions are not automatically deducted from parishioners’ bank accounts. Instead, parishioners go online and manually withdraw money from their bank accounts and contribute it to the parish, Guinnip said. Parishioners may forget to make the transactions from time to time or decide to change the amounts they contribute, so giving is more consistent with the automated electronic-giving program, she said.

"It allows us to control our monthly budget and also helps the church in their budgeting, knowing that we will be giving a set amount every week," said Lynda DeOrio, who is enrolled in Sacred Heart’s electronic-giving program.

The automated nature of the program may make some parishioners hesitant to enroll, particularly if they are worried about having enough money in their accounts, Guinnip said. However, that shouldn’t be an issue if they’ve already budgeted for the money they put into the collection basket each week, she added.

When people sign up for electronic giving, they also can designate how much they’d like to contribute to second collections and other appeals, added Sandi Mettler, bookkeeper at Holy Family Parish in Auburn. When Holy Family parishioners enroll in electronic giving, they also are given the option of making regular contributions toward the parish’s heat and fuel costs and to St. Joseph School in Auburn.

"Those are monthly donations, and we also have a capital campaign. They can give to that monthly as well, and we have another page for all the holy days and all the special diocesan collections. They put down how much they want to give for each of those," Mettler said, noting that 23 families currently are enrolled in Holy Family’s program.

Mettler thinks concerns about privacy and security may be keeping some parishioners from enrolling in electronic giving, an opinion shared by Dan Cuddy.

"As time has progressed and people are more familiar with automatic debits from their account, and maybe a little more comfortable with cyber security, I think maybe their views are changing a bit," said Cuddy, who enrolled in electronic giving as soon as Sacred Heart/St. Ann began offering it.

Cuddy also said some people may be hesitant to enroll in electronic giving because they’re afraid of what their fellow parishioners may think when they don’t drop their envelopes into the collection basket each week. Families enrolled in the electronic giving don’t receive paper envelopes, which saves the parish money, Mettler said. It also saves parishioners the trouble of remembering to bring their envelopes to Mass or drop them off at the parish if they’re out of town on the weekend, noted Carole Tomandl, who enrolled in Holy Family’s electronic-giving program shortly after it became available several years ago.

"I love the freedom it gives me. I can budget at the beginning of the year and I know exactly what I’m going to have taken out for the whole year," Tomandl said.

"It’s a lot easier in my mind," Cuddy agreed.