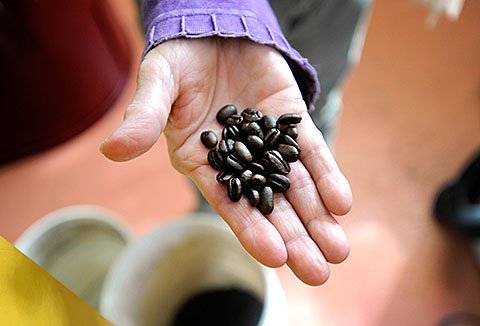 Fair-trade coffee is sold at Coffee Connection in Rochester.

Kristine Mich was disgusted when she learned not only that some stores had scheduled major sales on Thanksgiving Day, but also that shoppers were camped out in line in front of the stores even before Thanksgiving.

This is just the latest example of the way today’s capitalistic society and consumer-driven economy have hijacked Christmas, according to Mich, a member of St. Mary Parish in Rochester.

"Every year it becomes more pronounced to me how Christmas is being confiscated, and we really need to reclaim it for its true meaning," said Mich, who believes Christians have a key role to play in such a campaign. "It’s the church that is proclaiming what Christmas is all about, that Jesus Christ was born right in our midst, that God is with us. This is what Christmas is about, and so it’s appropriate that we take the lead in reclaiming Christmas."

Mich encourages the people she meets to simplify Christmas, spend less on gifts and shop conscientiously. One way to do this, she said, is by attending St. Mary’s Alternative Christmas Fair, which will be held in the parish’s Dugan Center Dec. 7 after the 4 p.m. Mass and Dec. 8 after the 10:30 a.m. Mass. The fair features a variety of fair-trade items for sale through such agencies as Catholic Relief Services and such businesses as the Coffee Connection, which is a nonprofit that sells organic, fair-trade coffee while providing job training for women recovering from addiction. The fair also will feature a wide variety of locally made goods from St. Michael’s Woodshop, Healthy Sisters’ Soup and Bean Works, the St. Joseph’s House of Hospitality’s Bread for All bakery, and a number of other local institutions and programs.

"The main focus is to offer the opportunity to shop for items that are an alternative to those that have been made in sweatshops," she said. "We also try to do some education along with that about fair trade and the higher cost of low prices, which is basically the devastating reality of the conditions in locations around the world in sweatshops."

St. Mary is not the only parish to offer ethical ways for holiday shoppers to spend their cash. A handful of parishes throughout the Diocese of Rochester regularly sell fair-trade items, especially coffee and chocolate. A number of parishes also have promoted alternative giving, through which a gift giver makes a charitable donation on a loved one’s behalf instead of buying that person a physical gift. Both options seem to be gaining popularity, noted Kathy Dubel, diocesan Catholic Relief Services coordinator.

Dubel said she frequently encourages Catholic parishes and schools to participate in CRS’ fair-trade program in particular. They can either distribute the catalog of fair-trade coffee, chocolates and handmade products to their parishioners or host consignment sales of fair-trade items. The farmers and artisans who produce fair-trade items have been paid a fair wage for their efforts, unlike many of their peers who are exploited and severely underpaid.

"Fair trade seeks to build what we would call right relationships. It’s such a unique way to really feel good about how you spend your money," said Dubel, who also is justice-and-peace coordinator for Catholic Charities of Chemung/Schuyler. "When you purchase a fair-trade item you feel like you’re doing good, and you’re getting some beautiful gifts. It lets us bring the values of our faith to bear on the choices we make."

Our Lady of the Lakes Catholic Community in the Finger Lakes has been selling fair-trade coffee, tea, cocoa and hot chocolate at two of its worship sites for nearly 10 years, according to Nancy Richardson, a social-ministry committee member who coordinates the sale at St. Michael Church in Penn Yan. Richardson, who estimates she sells between $50 and $100 worth of goods each month, said Our Lady of the Lakes uses its fair trade sale as a way to spread awareness about the plight of underpaid and exploited workers in other countries.

fair-trade sales certainly are a good way to educate parishioners about those issues and introduce them to the concept of conscientious shopping, agreed Brigit Hurley, a member of the social-ministry committee at Rochester’s St. Monica Parish, which sells fair-trade coffee and chocolate after Masses once a month. Hurley, for her part, said she’d been aware of the facts about fair trade and knew Catholic social teaching talked a lot about treating workers fairly and as human beings rather than commodities. It wasn’t until she heard a Ghanian farmer share his experiences, however, that she truly became a fair-trade devotee. This man, a father of five, brought the concept alive when he told her how his life changed after becoming involved with CRS and being paid a decent wage for the cocoa he grows.

That concept is starting to sink in amongst parishioners at Blessed Trinity/St. Patrick parishes in Tioga County, according to Ellen Keough, pastoral associate. The parishes hold an annual catalog sale of fair-trade items, and Keough has noticed that many families order gifts from this catalog year after year. Keough believes these families appreciate the fact that these products were not made in sweatshops by exploited workers or children.

"I think people appreciate how hard it is for some to make a living, and we can’t make a living off someone else’s back. It goes along with our social teaching that we have this option for the poor, that we’re supposed to care for them. We need to think about who bears the cost of the things we buy. It’s not us," Keough said.

Another way to give

Alternative giving is a great option for that person on your Christmas list who already has everything, Dubel added.

"Instead of giving Uncle Tom another tie, maybe he would really like knowing he helped a village get a water system. It’s a way to have his gift go on all year long," she explained.

St. Benedict Parish in Canandaigua and East Bloomfield started its own alternative giving program about five years ago, according to Deacon Claude Lester, social-ministry coordinator at the parish. Each year donations received through this program help the parish raise funds for its Kenya Project, which seeks to improve the water supply, health care and educational opportunities in the Kenyan village of Kalama.

"It’s been very successful and a lot of fun," Deacon Lester said.