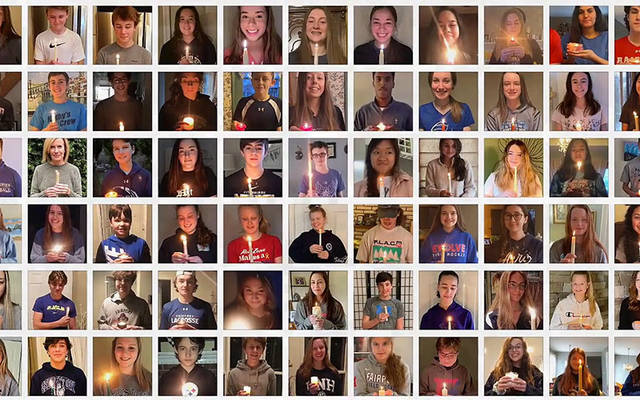 “No matter how far apart we are physically, we are always together.”

High-school senior Julia Lee came to that realization during Holy Week as she watched dozens of teens virtually passing a candle from one to the next.

The teens, including Julia, were at home with their families, where they’d been for nearly a month. In mid-March New York Gov. Andrew Cuomo had closed schools and many businesses and banned large social gatherings — even at churches — through the New York State on Pause Act in an effort to stop the spread of the novel coronavirus. As Easter approached, Julia, who belongs to the youth group at Church of the Resurrection in Fairport, was missing the group’s weekly Sunday-night gatherings.

Julia was able to see her friends again — on a screen, at least — April 8, when she watched a video of herself and fellow youth-group members virtually passing a candle to each other. Youth minister Margaret Osler and volunteer Lisa Courtney-Holmes produced the video as a way of connecting the teens without breaking any of the new social-distancing rules.

In recent weeks, youth ministers throughout the Diocese of Rochester have been scrambling to find new ways to carry out their ministries.

“I feel like we’re working harder because it’s so important to keep everybody feeling connected to the church,” Osler remarked.

“This is quite an adjustment,” added Barb Legere, director of youth ministry at St. Pius Tenth Parish in Chili. “But ‚Ä¶ you just start. You start by offering something, anything, the easiest thing that you can offer. And if that doesn’t work, you try something a little different, and you keep trying ‘til you get something that clicks a little bit, and from there you just grow little by little.”

Osler and Courtney-Holmes’s video appears to have been successful. By mid-April, the video had been viewed more than 800 times on YouTube and was featured in an April 10 segment on Spectrum News. The video came together quickly, said Osler, noting that she asked each teen to have a family member record a short video of the teen reaching outside the camera frame, taking a lit candle and passing it out the other side of frame. She received more than 50 videos within 36 hours of making her request, and she and Courtney-Holmes spliced those videos together so it appears the teens are passing the candle to each other.

“I think that the video highlights the positivity and solidarity that has been brought about in response to the pandemic, ” said Teagan, a junior in high school.

Osler’s goal was to add light and happiness to the teens’ lives, since she knows many of them are missing their friends, sports and activities. She’s received a flood of positive feedback from teens, families, Church of the Resurrection parishioners and others throughout the Rochester area.

“It’s cool to see how a video that our youth ministry made to stay connected is having an impact on so many other people in the community,” noted youth-group member Tim Vaquero.

Legere loved the Fairport youth group’s video so much that she recruited teens from her own youth group at St. Pius Tenth and created a similar video. Families responded quickly and seemed eager to have something concrete to do, she said. Legere also has offered a number of other new initiatives for teens, including online Bible study groups; daily devotional emails for teens; and Prayer in PJs, a nightly five-minute prayer meeting online. Legere and other youth ministers throughout the diocese have been utilizing such tools as Facebook and Instagram, as well as online video-conferencing platforms like Zoom.

Many students are using such platforms to attend online classes on a daily basis, so youth minister Rich Rasmussen was worried teens might not want to get back online in their free time to attend virtual youth-group meetings. That doesn’t seem to have been the case, however, as his weekly Zoom meetings for the youth-group members of Immaculate Conception Parish in Ithaca have been well-attended thus far.

“They all showed up,” Rasmussen said. “Young people still want to connect.”

Rasmussen is grateful for the technology that allows such digital interaction to occur and said such availability is one sign of God’s presence even in these challenging times. At the same time, he doesn’t believe virtual interactions could ever completely replace physical interactions, and people want to be able to gather again.