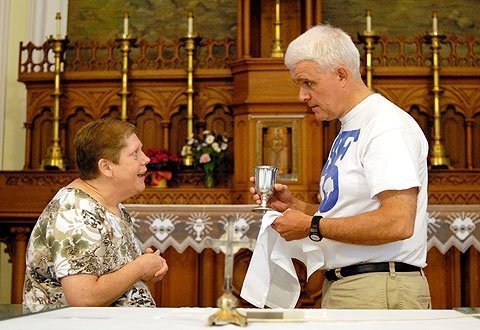 Sister Karen Dietz trains Peter Hecht, an extraordinary minister of holy Communion at St. Agnes in Avon, to also minister at St. Rose in Lima during a liturgical minister training session for the St. Agnes/St. Paul of the Cross/St. Rose parish cluster May 19.

LIMA — How should extraordinary ministers of holy Communion position themselves in order to ensure a smooth flow of people?

How long should a lector pause between the end of the psalm recital and beginning of the second reading?

Who’s responsible for making sure that people who require gluten-free hosts actually receive them?

Should choir members receive Communion before or after the rest of the congregation?

As spirited conversation unfolded on May 19 at St. Rose Church regarding these and other liturgical matters, it became clear that smooth execution of the Mass doesn’t happen with the snap of a finger. Fine-tuning liturgical responsibilities was the focus of that morning’s get-together, as well as for similar sessions at St. Paul of the Cross in Honeoye Falls on May 14 and St. Agnes in Avon on May 24.

The hour-long gatherings were led by Sister Karen Dietz, SSJ, pastoral administrator for the three-church cluster. They brought together folks serving in such liturgical functions as extraordinary ministers of holy Communion, lectors, ushers, altar servers, musicians and Mass coordinators who prepare and clean the altar area before and after liturgies.

Sister Dietz said the meetings served not only as refresher courses, but also recruiting sessions to attract people of all ages for liturgical roles. She further noted that participants talked extensively about adapting to the new English translation of the Third Edition of the Roman Missal. Sister Dietz observed that liturgical ministers as well as many other parishioners are still struggling with some of the changes that took effect in late 2011.

"The most important thing we can do is listen," she said.

"A refresher is always good. There have been numerous changes since the Roman Missal and it’s been an adjustment," added Mike Drexler, pastoral associate for the St. Rose/St. Paul of the Cross/St. Agnes cluster.

Among the other points covered during the May 19 session at St. Rose:

* Pondering how to better engage congregations in reciting the Roman Missal responses. One participant wondered if there was a way to "coach" Mass-goers in responding more cohesively and enthusiastically.

* Extending compassion for priests regarding the Roman Missal changes by keeping in mind that they’ve had to make even more adjustments than the congregations. "Our sensitivity needs to be heightened," Sister Dietz said.

* Noting that priests and extraordinary ministers should all be in position before any one of them starts distributing Communion.

* Clarifying whether lectors should be processing and recessing with the priest, deacon and altar servers at the beginning and end of Mass.

* Determining which points of the Mass the altar servers should be ringing bells.

Sister Dietz assured the May 19 attendees that all questions were valid since the answers would help bring greater understanding and fulfillment to their liturgical roles.

"Your ministry is critical to the celebration and if you are confused, not happy, or feel you’re doing it wrong, you’re not going to be doing it long," she remarked to them.

Sister Dietz told the Catholic Courier that each of the sessions was open to people from all three cluster parishes, as they move toward more uniform liturgical practices since the cluster took effect in 2010.

"They are making a very big effort to do things similarly, for the sake of the liturgy. Everybody has made a wonderful effort," she said, pointing out that some variables will continue to exist such as different tabernacle locations from church to church.

As a follow-up to the liturgical ministers’ sessions, Sister Dietz listed in her May 20 bulletin column a "wish list" for parishioners who might want to get involved in ways other than at Mass. Among the ideas she noted were: compiling a list of parishioner e-mail addresses; creating a website for the Lima/Honeoye Falls/Avon cluster; helping coordinate meals, rides and other assistance for those who are elderly, alone, ill and/or grieving; bringing Communion to the homebound; taking on cleaning duties at the St. Paul of the Cross parish hall; helping provide pastoral care for those in hospitals through visits, prayer and bringing Communion; helping coordinate the parishes’ liturgical life; and volunteering to do research and give recommendations on how parishioners can be of service in the parish community and beyond.