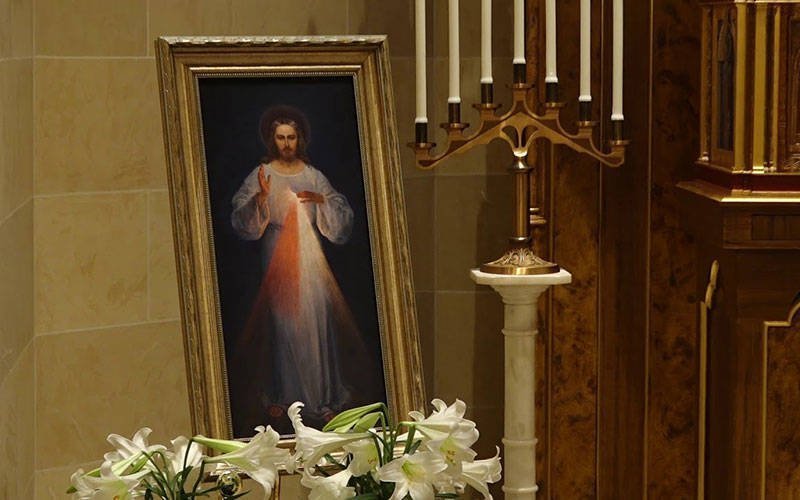 As examples across the Diocese of Rochester illustrate, Divine Mercy devotion remains popular among Catholics some 90 years after a Polish nun’s apparition touched off this special form of prayer.

Attention to Divine Mercy will reach its peak on April 11, Divine Mercy Sunday, with a number of observances taking place around the diocese. For instance, Parish of the Most Holy Name of Jesus in Elmira, Immaculate Conception in Ithaca, St. Marianne Cope in Henrietta and Schuyler Catholic Community will offer services to conclude nine-day Divine Mercy Novenas set to begin Good Friday, April 2.

Divine Mercy devotion grew out of the experiences of St. Faustina Kowalska (1905-38) who is renowned for her many visions of, and conversations with, Christ and Mary. In her diary, she described Jesus’ appearance to her on Feb. 22, 1931, when she was 25 years old and living at a Sisters of Our Lady of Mercy convent in Plock, Poland. The widely circulated image of the Divine Mercy, with the accompanying description “Jesus I Trust in You,” originated from St. Faustina’s description of Christ as he appeared to her on that day — clothed in white, with rays of red and white emanating from his heart. St. Faustina also wrote that Christ instructed her to establish a Divine Mercy devotion for the redemption of sinners, to be observed daily between Good Friday and the first Sunday after Easter.

St. Faustina died from tuberculosis in 1938, at the age of 33. Devotion to her grew in subsequent decades, eventually spreading to the United States where the National Shrine of the Divine Mercy, located in Stockbridge, Mass., was dedicated in 1960. A major boost to Divine Mercy’s popularity was provided by St. John Paul II, who — after many years of promoting interest in the life of St. Faustina, a fellow native of Poland — beatified her in 1993 and canonized her on April 30, 2000. The canonization also marked the official establishment of Divine Mercy Sunday worldwide, to be conducted annually on the second Sunday of Easter. Following his death in 2005, St. John Paul himself was beatified on Divine Mercy Sunday in 2011 and canonized on that day in 2014 along with St. John XXIII.

Divine Mercy Sunday observances are often conducted at or around 3 p.m., to signify the hour of Christ’s death. The devotion is popular not only during the Easter season, but throughout the year as well — particularly in the form of chaplets, a series of prayers using the rosary. Exposition, adoration and Benediction also are common features of Divine Mercy prayer rituals.

Along with its Divine Mercy Novena taking place in early April, Schuyler Catholic Community has a Divine Mercy prayer group that meets at St. Mary of the Lake Church each Monday afternoon at 3 p.m. and Saturday morning at 8 a.m. Another parish with yearlong Divine Mercy devotion is St. Luke the Evangelist in Livingston County, which — in addition to planning a Divine Mercy service for April 11 at St. Mary Church in Geneseo — offers a communal Holy Hour featuring the Divine Mercy Chaplet on the third Thursday of each month from 9 to 10 a.m. at St. Patrick Church in Mount Morris. In addition, the chaplet is included in the itinerary of a Monday-night prayer group meeting at St. Patrick Church from 7 to 8:30 p.m.

Joseph Guido, a coordinator of the Monday-night gatherings along with his wife, Donna, said the couple’s Divine Mercy devotion extends back 21 years to when they traveled to Stockbridge in honor of St. Faustina’s canonization. Saying that Jesus promised to Faustina that Divine Mercy devotees would receive “tremendous graces,” he explained that the Monday meetings in St. Luke the Evangelist Parish also feature prayers for people who are very ill.

“Having Divine Mercy is a great instrument for reaching out for other people. We’re an intercessory prayer group,” he said.

Divine Mercy chaplets and novenas may be prayed in homes as well as in parishes; in fact, Guido said that he and his wife pray a Divine Mercy chaplet every night. A number of opportunities are available online and through Catholic radio and television.