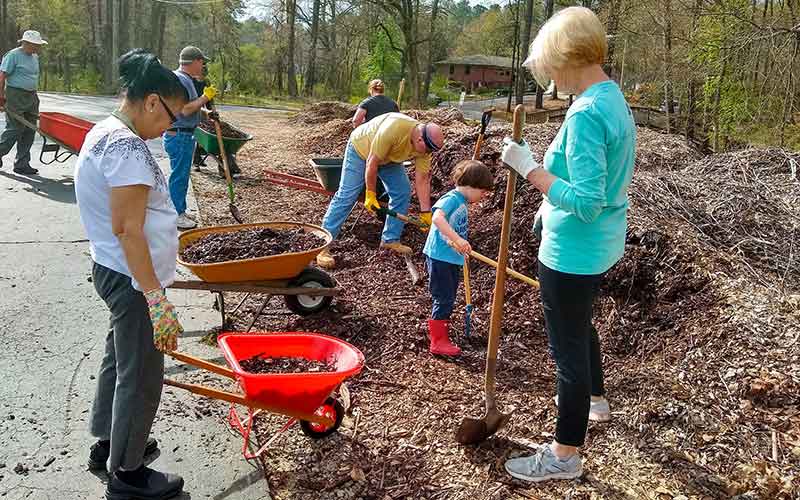 The environmental crisis facing our world can overwhelm us. In light of the challenges, what can one person do?

Plenty, say Catholics who are joyfully working to bring Pope Francis’ encyclical, “Laudato Si’, On Care for Our Common Home,” to life in parishes around the country.

“The Catholic Church can be a change agent,” Susan Varlamoff said. “We’re creating momentum, creating a movement. We can show the value of this work and make it a fun thing to do.”

Varlamoff has been instrumental in writing the “Laudato Si'” Action Plan for the Archdiocese of Atlanta. It’s a colorful and accessible roadmap for parishes.

And some of the most important revolve around energy efficiency.

First was conducting an energy audit, and action proceeded from that. Lights in the chapel and restrooms have motion sensors. Air conditioning units were upgraded to energy efficient models and put on a programmed schedule.

Temperatures were set at levels to minimize energy use. Volunteers created an eco-friendly landscape, with less than 40% lawn.

Volunteers even started washing dishes at small parish events when, Varlamoff said, “they were sick of seeing so much garbage.”

“We’ve cut greenhouse gas emissions by 40%, cut water usage by 70%, and our waste is down by 50%,” Varlamoff said. Small changes include repairing leaks and installing low flush toilets.

There’s a well-kept secret to this efficiency: St. John Neumann is saving $9,000 a year on energy because of this green commitment.

Of the 103 parishes in the archdiocese, 40 have created creation care teams, with more scheduled to form. Many, like St. John Neumann, are raising fresh produce to benefit food pantries.

Kat Doyle is the director of justice and peace ministries for the Archdiocese of Atlanta. Implementing “Laudato Si'” falls under her department, and she said Atlanta was the first U.S. diocese to put together an action plan, focusing on 10 different areas, including energy, water, waste and recycling.

Doyle will be the U.S. representative to the Vatican’s working group forming a “Laudato Si'” Action Platform for dioceses throughout the world.

That commitment includes, said Doyle, “a $100,000 donation from the annual appeal.”

Even if you can’t make big changes in your parish’s energy commitments, you can take smaller steps. Some parishes host webinars on using sustainable wrapping paper, how to start recycling projects or encourage using cloth bags to replace plastic and order compostable garbage bags for church and school.

And even in dioceses where the green commitment is not as well-organized as Atlanta, individual parishes are doing great things.

Take St. John Parish on the Creighton University campus in Omaha, Nebraska. Mary Ruth Stegman has been leading the creation care team there since 2017 with a focus on the major social events that the parish hosts.

“Our goal is zero waste,” said Stegman, and her team attempts that by having stations available at events directing people on where they can put recyclables, like pop cans, and what can be put into composting.

“We contract with a commercial composting company,” Stegman explains. “They bring a container, we fill it during an event with things like paper plates, napkins, leftover food, anything compostable. On Monday morning, they pick up the container.”

The group has another station for plastic that isn’t recyclable. This goes into Hefty orange bags, which can be purchased at local groceries. The plastics are processed at a plant in Omaha, then shipped to a facility in Lincoln, the state’s capital, where it’s turned into items like plastic furniture or decking.

“About the only things we have to send to the landfill are aluminum food containers,” Stegman said.

The campus church hosts several large social events, and one of the largest is a Wednesday night Thanksgiving feast for students who remain on campus for the holiday.

“When we started, the kids would say, ‘this composting is great — why isn’t the whole university doing this?'” Stegman said.

It wasn’t long before suggestions from students resulted in a campus-wide program, with composting containers throughout the university.

To begin a parish creation care team or to become more involved individually, visit catholicclimatecovenant.org, a project launched in 2006 by the U.S. Catholic bishops along with other Catholic organizations.

Their website offers a wealth of suggestions, and their monthly newsletter provides tips on how to contact your legislators or how to make green changes at home.

Catholic teaching has always promoted care for the environment. From St. Francis of Assisi to Pope Benedict XVI, who introduced solar energy to the Vatican, Catholics have been at the forefront of environmental concern for centuries.

Varlamoff points out that there are well over 1 billion Catholics in the world. If we each do our part, imagine what we can achieve.